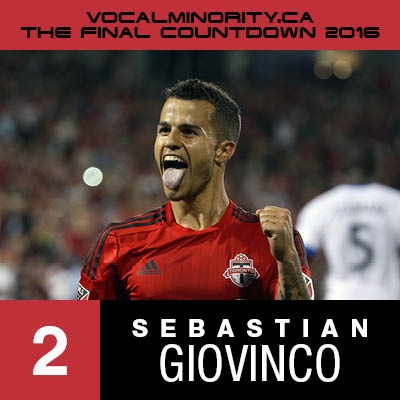 Duncan: 2 – Didn’t really get a lot of support for various tactical reasons through the long away trip and the mid summer patch where everyone else was injured but generally still kept playing well, scoring goals and doing his Seba things. Eventually seemed to wear him down and towards the end of the season and after his injury into the playoffs seemed to get frustrated a lot easier than usual. Whether he wasn’t fully fit, other teams were too physical or the pitch wasn’t good enough he kind of fizzled out in the last few games when it really counted. And let’s face it, his free kicks were shit all season long, can ‘Giovinco shoots’ please not be such an automatic choice next season. Anyway, still a ridiculously good and fun player to watch, I DO like Seba.

You don’t like Seba?
I do. Honestly I do, he’s clearly the most talented player in TFC’s history, last year was arguably the best individual season ever had in MLS and this year had plenty of the good stuff. 17 goals, 15 assists, multiple hat trick games, including one in the playoffs in Legendary, Historic Yankee Stadium. Just within that 8 game road trip to start the season he scored 3 game winning goals. There were plenty of very good goals scored again this season, 2 free kicks against DC, a couple of high quality goals against New England, etc etc. There were also the random moments of ridiculous skill, showing off just how far ahead of many MLS players he is, such as this in the wild card game against Philly.

There were also times where he seemed to be having fun out there, his Vespa riding celebrations for example, and the time he pretended to slap Tsubasa Endoh after a shot deflected off Endoh’s back and in. All in all, many good times, and though it wasn’t quite the feel good romp of 2016, there was definitely some legitimacy to the outrage when he didn’t even make the top 3 in MVP voting. He seems to genuinely like being in Toronto and takes this whole MLS lark seriously, which you can’t always say of DPs in this league, so really we’re all lucky to have him and I’m very much looking forward to watching him again next year.

And yet, I don’t think anyone, including Giovinco would look at this season as a satisfactory one for him. It’s very unfair of course, the bar is set ridiculously high, but all in all it was a bit of a disappointment, an often very frustrating one. Obviously there were plenty of factors beyond his control, the team was a bit more focused on defence, which is a very good thing but not helpful for an attacker. Throughout the first half of the season, Altidore was often injured, missing or otherwise ineffective, and no offense to Mo Babouli or Jordan Hamilton, that made it very easy for other teams to focus more on him, which they often did quite thuggishly. Things seemed to be turning round in the second half of the season when the team got back to full strength, but then came the adductor injury. Coming back from that, he never seemed to quite get up to full speed, despite his moments of beating up Philly and NYC.

All of that, combined with the physical attention he consistently got throughout the season meant that there was a lot more of visibly frustrated Seba this year, mostly in the medium of frantic gesturing in the direction of referees, sometimes colleagues. It’s kind of annoying to watch as it rarely leads to good things for the rest of the game, but really it’s all worth it for that one moment against Chicago when he went all incredible hulk and ripped his jersey. Magical stuff.

One problem with frustrated Seba is that he often tried to do way too much, taking very low percentage shots or ignoring teammates, something that was very much a trend in that patch of the season when it was Babouli or Hamilton up front with him. That of course makes him more predictable, easier to shut down and talking of predictable, let’s talk about his free kicks, which were absolutely awful this year.

He had one game against DC where he scored twice, but that was it. All season long he was taking every single free kick that was within shooting range, it became a thing, predict what he’d do with them, one I was successful at often enough and long enough for it to become a parody of itself. He always shot, he almost always tried to go over the wall, if within 5 yards of the box, he’d almost always hit the wall, if further back, he’d generally get it over the wall, sometimes wide, sometimes saved by the goalie, sometimes dangerous, but generally not. There was never variety, he didn’t try going to the goalies side instead of wall side, he didn’t pass, or try some kind of trick play, or let somebody else take one every now and then, all things which might have helped plant a tiny seed of doubt in the goalies head and thus increase his chances of scoring. When he missed games with injuries, I was desperate for someone else to score and for there to maybe be a bit of a change. Altidore did score but as soon as Seba was back he was back taking them all, doing the exact same thing. Hopefully that’s something that will change next season.

The season of course ended in disappointment. TFC played a cautious game against Seattle, including their substitutions, with Greg Vanney perhaps thinking he just had to secure the defence and then hope Seba can come up with something out of nothing up front. He couldn’t, bullied out of the game by Alonso, Torres and the sand heavy pitch and so he had to take himself out of the game and watch the end of extra time and penalties from the bench.

Hopefully in 2017 he’ll be fit, motivated, ready to channel that frustration positively, and ideally he’ll get more protection from the refs and a consistently good supporting cast around him and we’ll see a lot more of happy productive Seba, that guys a lot of fun to watch.

Kristin: 3 – Super Seba!  One of the best players ever to play in MLS, even if his play took a step back this season.  Which may be unfair given how brightly he shone in 2015 but he definitely struggled this year; had more difficulty scoring, had more difficulty dealing with opposing defenders and looked frustrated more and more as the season wore on.  Look forward to him bouncing back this year, cause when he’s on his game there’s no one that can match him.

Mark: 4 – Expected more from the league MVP, and I think that’s why I didn’t rate him higher, though was very good.

David: 3 – While he could have been #1, his form just wasn’t up to last year.  And blaming the pitch cost him in the rankings – the pitch was the same for EVERYONE.

Mark HSV: 2 – Should Giovinco be #1 instead? Maybe, but his impact waned as the season went on and he got frustrated with defenders constantly fouling him. But could pull a rabbit out of a hat at anytime and is still likely the top player in the league on most days.

Steve: 3 – Easily the best player in the league, but his petulance and frequent penalty seeking behaviour is grating on me.

Mel: 3 – Another year of Seba doing Seba things. He truly is something special to watch.

Duane: 2 – Injuries and head space put him behind Jozy.