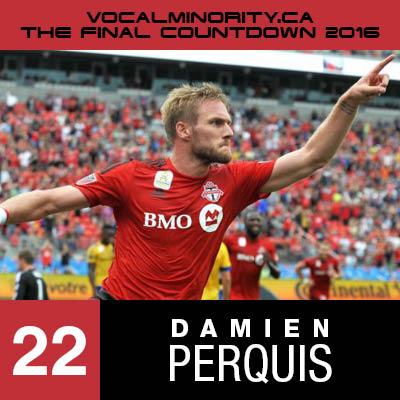 Duncan – 19 The French Polish Darren O’Dea. Paid too much, does some good stuff, not good enough to be the guy to pull the whole defence together, but when there’s somebody else to do that, all of a sudden he doesn’t look that bad.

After a pretty crap 2015, I was really hoping Bezbatchenko and co would be able to find a way to wonk him out of the squad as well as Ahmed Kantari. Alas they couldn’t, but I was pleasantly surprised as Perquis actually looked alright out there alongside Drew Moor, and he genuinely contributed to the improved defence, and that defence didn’t quite look as good without him there. Still though, Rickets + Cooper > Perquis any day of the week so it’s good to have his salary off the books.

I don’t remember specific moments from the season really, but he did score a goal, getting a touch on a Giovinco free kick to score against New York City, and wikipedia tells me he’s also scored twice so far this season for Nottingham Forest as well, good for him I guess.

Kristin: 22 – Amazing how competent he looked with a good CB partner next to him.  However the possessor of the best personal website ever wasn’t long for TFC and he was (rightly) cut loose.

Mark: 24 – Here’s the thing: was excellent, scored one, but overpaid and only played a third of the season

Duane – I liked him as a player. I like him more now that hes not on TFC’s books

Mark HSV – I never disliked Perquis and I hoped a CB tandem of him and Moor would be solid, but clearly the formation with Moor/Zavaleta/Hagglund became the way forward for TFC. Good to have Perquis’ salary off the books.  Good luck to him back in Europe.

Mel – I like his passion, and the intensity he plays with. I just don’t think this was his year.