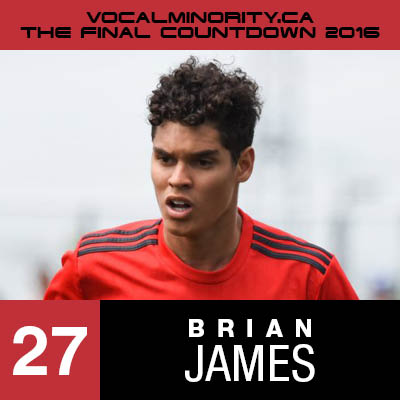 Mark: 27 – I will treasure all of his contributions this season.

Brian James made his debut for Toronto FC in the Voyageurs Cup replacing Dan Lovitz in a game against Montreal and contributed six minutes.  Thank you Wikipedia.  Six whole minutes.  That’s nearly 360 seconds, if my math is correct.

The 80th pick overall from last season’s SuperDraft (TM) out of Penn State, the midfielder finally got his big-time break as his number was called to enter the match, with Toronto up 4-0 at home, he entered the match with dazzling confidence and a commanding presence.  His contribution cannot be overlooked, regardless of the fact that the Impact went on to score 2 goals in the final 4 minutes of the match.  I’m sure it’s not his fault.  I mean, they had a clean sheet until he came on, then he came on and they didn’t.  Probably locusts or something else.  June weather is so unpredictable.

To be fair, he did play in 29 games for the sequel, TFC II : Electric Boogaloo.  In his time, he bagged 2 goals and 3 assissts with 4 yellows.

And he wears #36.  And his dad was a former pro.  And he loves doing zumba (who doesn’t?).  The barrel of information has thoroughly been scraped here.

Kristin: 27 – Apparently he played, I’m sure he was fine.

Tony: 28 – I thought this one was a trick to see if I was paying attention.

Mark HSV – For the bottom 3 who I know nothing about, I based the rankings on their goals at TFC II. With 2 goals, you’re last Brian.