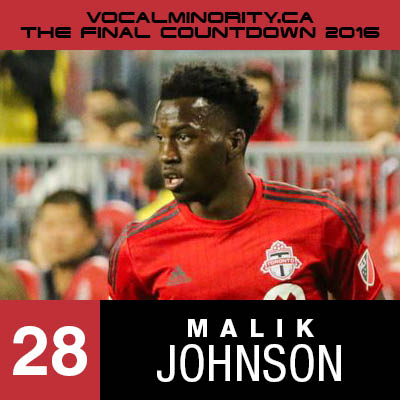 Hello and welcome to this year’s VMP Final Countdown!  With the off season being so short it’s come a bit later than usual, but hey we hear at the Vocal Minority are committed to giving you our dear readers the player rundowns that you’ve come to love.  Really the most difficult part of this year’s ranking is well, the players are less drama filled, less terrible and well less idiotic than in past years.  Honestly how are we supposed to properly rank players if we can’t make non-stop snarky comments?   However it is Toronto FC so there’s always room for snark, even at the end of a rather successful season.  So sit back, get ready to scratch your head and say “who? Did he even play for us this year?” a few times and surely disagree with some of the rankings – but hey, that’s part of the fun!  Disagree with a ranking?  Make sure to add your own thoughts in the comments!  And now to contestant, I mean player #1:

Mark: 28 – I will treasure all of his contributions this year.

Malik Johnson, made his first team debut in the same game as Brian James (who?), coming on just after the 4th goal in the 4-2 win over Montreal in the Voyageurs Cup. Maybe I’ve got the whole ‘lost clean sheet’ correlation all wrong with James as it was also 4-0 when he entered the pitch.  Tragic.

Been with the club since 2013, Johnson is one of those Brampton kids, and by “those” I mean “apparently overflowing with talent” (looking at you Mississauga!) who has worked his way through the Academy, and up to TFC II: Pig in the City.  He’s only 18 and his upside is looking pretty good right now.  Plenty of room to grow and become a force as a forward.

He, like his other basically unknown brethren, spent the majority of his season at TFC II: Their First Assignment, where he made 21 appearances and bagged 4 goals.

Kristin: 28 – I have a vague recollection of the name, but that’s about it.

Duncan: 28 – played 10 minutes, the chalkboard shows one successfully completed pass. Maybe he was good with TFC II, who knows?