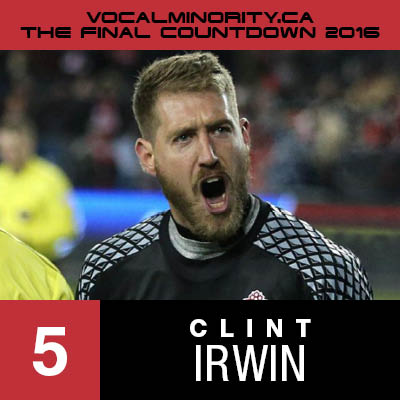 Kristin: 7 – Lost places for lack of playing time and only a so-so return post-injury.  However, started the season pretty great, he’s young and is great bang for the buck – hoping for really good things in 2017.

Clint Irwin has had an interesting career arc – to say the least – from playing in Ottawa for Capitol City in the now defunct Canadian Soccer League, t0 back-up for the Charlotte Eagles in the USL, to playing for one of the best teams in MLS; all in five short years.  Not many players can say that they’ve risen from literally the ashes of one of the lowest leagues to the top of one of the best (in North America, I’m not crazy!).

TFC grabbed Irwin after the 2015 season after the Colorado Rapids surprisingly let him go – of course we found out that Tim Howard was headed back to the States so maybe less surprising – but still, this was an unexpected move, but an intriguing one.  Toronto was in need of a proper No. 1 keeper, and Irwin was coming off a solid year with the Rapids.  I was full of praise for the signing and still view his signing as an excellent one and think that Irwin has good things ahead of him here in Toronto.

2016 wasn’t the ideal season for Irwin; he started off the year well and between him and Drew Moor had TFC in a much better place defensively and things were looking up for the Reds!  And then he was injured in a game against Orlando in late June with a quadriceps strain; an injury that would keep him out of the lineup for almost two months.  When he returned in September – and rightfully took back the starting spot, nothing against Alex Bono, but experience in net was called for – he admittedly didn’t look as good as he had in the spring.  Whether the time off had made him rusty or he wasn’t fully recovered from the injury is unknown.

After a bit of (faux) drama on Expansion Draft Day that saw him briefly go to Atlanta United – before being traded for the carrot that is Mark Bloom – Irwin remains a Red and is expected to be the starting keeper for the upcoming season.  I think that there is continuing upside to his game would like to see a full season of his no nonsense style in net.  Yes, he’s not the flashiest of keepers but has shown good instincts, has a good relationship with Moor and the rest of the defense, isn’t afraid to distribute the ball along the ground and has yet to make any serious “oh dear gods” errors.

I’ll leave it with this very nice point blank save on Lee Nguyen earlier in the season:

Tony: 5 – One of the best bang for buck keepers in the league

Duncan: 6 – Looked really good, then got injured, and didn’t quite look the same when he came back. A good solid, relatively cheap MLS keeper, no complaints at all here.

Steve: 6 – Good keeper, but we didn’t see his best this year.

Duane: 5 – The back-line kept them in it early season.

Mark HSV: 8 – Nothing wrong with Irwin and it was great to have a proper starting keeper this year that we didn’t have to question. Other guys made more of an impact to the team though, which is why Irwin is only at 8. Kinda tough to rank higher as a keeper unless you’re a constant game-saver.

Mel: 4 – He’s the best keeper we’ve had since Stephan Frei.

Jen: 6 – I think this was a key position for how we didn’t shit the bed this year; I will not let his ranking suffer for the period of time that he was out of commission (even though we survived without him).

David: 11 – Even though I ranked Clint below Alex Bono in the keepers, his play was still deserving of a better than the rest ranking.  Without his injury and Bono’s excellent play during his absence, I’m sure I would have ranked him higher.