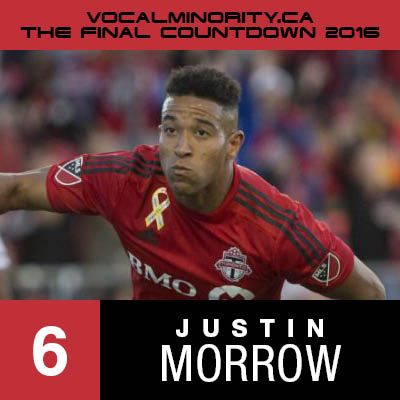 Kristin: 5 – Scored more than any of the midfielders, held down the defense and threw in some nice crosses.  Productivity going forward helped to offset the occasional lacking on the defensive side. Still, one of the best fullbacks in the league.

Justin Morrow has been one of the most consistent players for Toronto FC the past three seasons – one of the best signings that TFC have made in their short history and was a player that showed that TFC were looking to turn the corner from joke to contender.   He had a very solid 2016 season and though has dropped a couple of spots (4 to 6) from last year’s countdown, that has more to do with the overall quality of the team than a drop in quality on his part.  He didn’t have to play out of position this season (thanks Beita), started almost every game for the Reds (unfortunately at the expense of Ashtone Morgan) and led the league in goals scored by a defender (5) – not too shabby.

The goal scoring was an unexpected delight from Morrow – always one to go forward and throw in crosses, this season he started putting them in the net, showing a good instinct for goal.  A lot of that has to do with the formation changes by Greg Vanney; first the diamond midfield and the fast, high press and then the late season shift to the 3-5-2 – both meant that the fullbacks spent a lot of time in the attacking half, and as Morrow is more attack minded than Beita he made good use of his chances.  This one being a favourite as Morrow takes a great ball from Oso (who’d done some stellar work) to slide it past the keeper, tie the game and get TFC the point:

Morrow’s also not afraid to go in for a tackle – sometimes he mistimes them getting five yellow cards – but he’s a more than capable defender that has kept TFC in more games than he’s blown with silly errors. Having that kind of competence, and having it complemented by Drew Moor and Beitashour – as well as better defensive efforts from the midfield – has been key in Toronto not leaking goals like a sieve in 2016. His consistency – a word that gets used to describe him over and over – cannot be underscored enough; he’s been one of the few players over the past few seasons to play pretty much the entire season and play well.  He would be the starting LB on pretty much any team in MLS and we’re lucky to have him.  He’s also one of the players that gives back to the community and has had a summer reading program for at risk kids the past two years.

So he missed that penalty – he almost didn’t; that miss was a matter of inches as his shot careened off the underside of the crossbar.  He had Frei beat too – something to remember and something that most fans have said in messages and tweets to the defender after the final.  As much as I like Ashtone Morgan and want him to play, there’s no one I’d rather have at leftback than Justin Morrow; who, like Morgan, has over 100 appearances (across all competitions) for TFC:

Duncan: 5 – Another good year from Morrow, solidish in defence and helping out a lot going forward, including leading the league in goals by defenders. Shame about that penalty, but the lack of blame and anger from fans is a good sign of the general respect and goodwill he’s earned over the years.

Mark: 6 – Probably the biggest beneficiary from the 3-5-2 switch.  So good, so fast, and a poacher’s eye makes him very important.

Mark HSV: 5 – Another great season for Morrow, who even added some more offense to his game, with 5 goals. Once again you could argue he should be ranked higher.

Mel: 5 – 5 goals from a defender. Nothing else needs to be said.

Jen: 7 – Like he’s so good and no one should complain about his weird positioning because so many times he was right where he needed to be at key moments; not without errors, but whatevs.

David: 4 – Justin’s play on the left side and his delivery to the box was excellent again.

Steve: 5 – Both our wingbacks made the team exciting to watch going forward – love Morrow and Stevie B