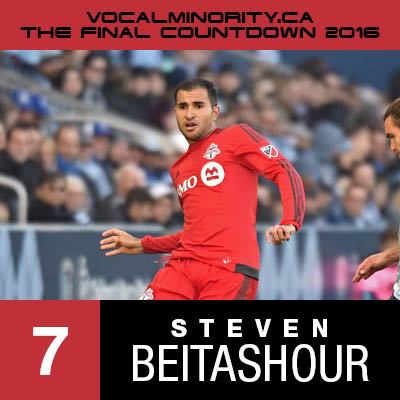 Duncan: 7 – He’s maybe a bit overpaid, but with how TFC play, the full backs might well be the most important players on the pitch, and Beitashour was alright out there. Not super convincing at either defending or attacking, but he does both of them about as well as can be asked form an MLS level player. The cross to Cheyrou was absolutely perfect as well.

After the 2015 season saw the right back position occupied by a revolving door of non right backs, improvement was always going to be easy, even just getting Mark Bloom back and healthy would have been welcome. Instead we got another solid MLS experienced player in to go along with Moor, Irwin, and Johnson. Lovely. Especially as it screwed over the Whitecaps, for whom Fraser Aird was a bit of a disaster and there once solid defence was a shadow of itself this season.

Beitashour wasn’t brilliant by any means, I’d describe him as generally defensively solid, though good for at least one fuckup a game, and dangerousish going forward though not as good of a crosser of the ball as you’d like for a team relying so much on it’s full backs to provide the width. His cap hit might well be just a bit too expensive for what he brings, and thus he was left exposed in the expansion draft and not taken by anyone.

It’s difficult to really think of highlights of his season, as evidenced by his stats of 0 goals, 1 assist and 3 shots on goal over the regular season. As has been said many times before though, that’s not a bad thing for a defender. All in all though, I feel like his side was definitely the weaker when in the 4-4-2, and Nacho Nacho Man Piatti having his way with Beitashour and Delgado down that side in the penultimate league game was the end of that as the 5-3-2 was ridden the rest of the way to the final, Beitashour definitely faring better with a bit more protection alongside him.

As mentioned before his crossing generally isn’t that great, until of course that one moment when it was absolutely perfect, bringing it back on to his left foot and putting in an inswinging cross, behind the defence, but not close enough to the goalie for him to come for it, and right onto the glorious diving head of Benoit Cheyrou for the game winner.

All in all, I’m glad Beitashour’s back. A back up right back needs to be found before the season starts and ideally that guy would be good enough to play a few games when the schedules busy, but if not, I’d be fine with seeing Beitashour out there pretty much all season.

Mark: 9 – I got used to his “one howler moment” a match, and he was very good after that.

Kristin: 10 – I like Beitashour and he was a big part of solidifying the defense this season.  He gets a lower ranking from me because of those ‘oh dear gods’ mistakes and he’s not the best part of the forward attack (except of course for the cross on that goal).  But was great to have a regular RB this season and his experience definitely contributed to last year’s success.

Tony: 7 – Not quite Morrow but really dependable with a mean cross.

Duane: 7 – Part of a huge back-line turnaround, but mistake prone.

Mark HSV: 7 – Some blunders during the season, and not a great crosser, but a solid defender. It was important to have stability at RB for TFC finally, and he brought it. Lost a bit as the season wore on, but it was a long one. Good to have him back next year.

Richard: 13 – Decent but switches off too much.

David: 5 – Similar to Morrow, very strong on the right side.  Strong on the ball, and great coverage back.