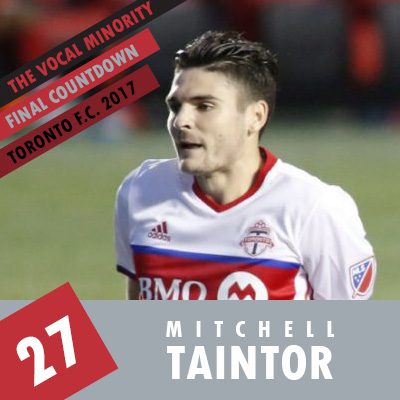 Happy New Year!  Resolutions firmly in place and raring to start the whole ‘new year, new you’ thing?  Excellent.  We here at the Vocal Minority aren’t big on resolutions, but we do have an entirely new set of player rankings for you to enjoy over the next few weeks – you know while you’re at the gym, or at home binge watching Black Mirror or The Crown, we don’t judge.  All of the entries (thank you to all that participated!), have been carefully collated and tabulated in the VMP laboratory and we’ve cooked up some results just for you!

This year – much like last year – was a difficult one in terms of ranking the 27 players that took to the field (in all competitions, take a bow Mitchell) for Toronto FC in 2017.  How do you possibly pick one player over another after a season in which the team won all the damn things?  By being dispassionately, brutally honest!  We are professionals here – and you are professional fans – and we have to rise above our feelings and *breaks into laughter*…OK, everyone had at least one emotional pick, and everyone has their opinions on just who did what over the season, and not all players saw much of the pitch, nor did they contribute the same amount.  There will be a few surprises in this year’s countdown (don’t blame us, we’re just the messengers), but first up on our list isn’t one of them.

As always if there’s a ranking you disagree with (or agree with), leave a comment, join in on the fun and of course enjoy the commentary from your VMP folk and your fellow TFC fans.

Duncan:  Scene: December 29th, evening. Duncan, Kristin and proper journalism’s James Grossi stand outside smoking. “How did Taintor even get on the list?” “Apparently he played at some point” “Yeah, in the Voyageurs Cup, the game in Ottawa” “Really? Huh!” End scene. That’s all the impact he made on me, aside from the obvious Taintor gags – ‘Good in the middle’ does a good job linking back to front’ etc etc. Damned if I’m going to research anything more about him to flesh this out. An earned 27.

Tony: 27 – Answering The question: who’s that guy at the back of the picture when they’re lifting MLS Cup – it’s # 27 Mitchell Taintor!

Mark: 27 – Mitchell Taintor was definitely a soccer player who had signed with Toronto.

Kristin: 27 – The player most people questioned me about when helping rank the players, “Who?” and “Are you sure he played” being the most popular.  Apparently a nice guy.

TweetKred: 27 – Who? I had to look him up to remember we drafted him but I don’t remember him seeing the field ( a few benches I think), ah a Vcup game. Good luck Mitch, I’m sure he’s saying Don’t You Forget About Me.

Ruchesko: 26 – I only recall his booking in the away loss v Ottawa. Inauspicious start.

Mark HSV: 27 – Never heard of this guy. I think many others ‘taint heard of him either.

James: 27 – With only a single appearance in a losing effort away to Ottawa in the first match of the Voyageurs Cup, it is hard to see Taintor coming in anywhere else in this countdown.

Mr. Tuktoyaktuk: 27 – I’m sorry, have we been introduced?

Jen: 27 – You can’t just fucking make people up and put them on the list.