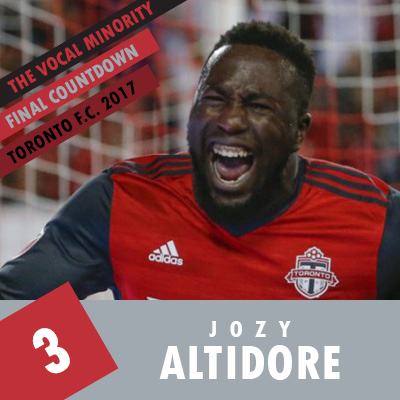 Kristin: 3 – Best.  Speech.  Everrrrrr.  What a way to finish the season!  I know that the season finished two days before that, with that thrilling goal that encapsulates Jozy Altidore’s season; a moment where any doubt in fans’ minds about Jozy’s abilities to score, to be a strong presence on the pitch, to come up big when needed was erased.

I’ll admit to having reservations – OK issues – with Jozy’s play when he first came to the team.  I didn’t see the work rate, or the consistent ability when he took to the pitch for the full 90 minutes; I thought he was better as a sub – but you don’t spend that kind of money on a sub.  But this year he changed my mind.  Maybe it was being healthy (for the most part) for the first season since he came to Toronto FC that made the difference, maybe he just finally turned the corner, whatever it was we saw a different Jozy this year.  He scored more goals than he has since joining the team – and a lot of big goals at that – but he was a menace in the box, holding up balls, taking on defenders, making space for others; it was a lot of fun to watch.

There’s still a faint bit of immaturity to his game – the incident with Klejstan on the pitch (forget the rumble in the tunnel), the times he goes down just a bit too easily (yes, like Seba I dislike this aspect of the game but again, digressing), the temper that’s not always tamed.  But for the most part that side of him was under control this season and we got to see instead a truly committed Jozy – one that worked for every minute on the pitch.

That speech though.  It wasn’t just that he was (self admittedly) drunk off his ass – I would be too were I in his shoes – it was a player showing his love for his team and the city he’s chosen to call home.  It was in a way, sweet; while being hilarious and a lot of fun to witness all at the same time. So yes I have him at Number 3 on this countdown because the top 4 were tough, oh so tough to rank this year for all they contributed to the season as a whole.  But that speech…thanks Jozy for an iconic moment to cap an iconic season.

Tony: 3 – Are you dumb brother? The long standing knocks against Jozy can be put to bed now. Yes, the Eurosnobs and the USMNT won’t likely let their misinformed narratives die so easily but Altidore is a big-game MLS striker – and that’s just fine.

Mark: 2 – Delivered when we needed him most. had a tremendous year.

MarkHSV: 3 – Jozy kept up the pace from the latter part of last season, right through this season and the playoffs. Showed why he is one of the best strikers in MLS.

WhaleyStatic: 1 – Honestly any of my top four could go here. Stupid dive aside just came up big when it mattered so number 1.

Steve C.: 4 – It’s hard not to rank him higher – I feel bad I have him at 4. He did everything possible this year to help us win. Fucking beast.

Jen: 3 – Once referred to as a mere “mirage” in a now-famous VMP blunder from the 2016 season (*Editor’s note – let it go Jen, let it go…), this beautiful, talented man carried us in 2017 to a championship. He scores the most important goals, to win the most important games, and he earned us an MLS Cup. Now THAT is no optical illusion caused by the refraction of light due to atmospheric conditions.

JordyLike: 3 – Top 3 was tough. Went from a guy I couldn’t stop saying was a waste of money, to an absolutely critical MLS finals MVP. Wasn’t nearly as drunk as he deserved to be. Consistently upsetting since I keep running out of bad things I can say about him, but I’ve heard there are plenty of other people who do that on my behalf.

TuffyRocks: 1 – A Clutch player exactly when the team needs him. Took TFC in to the final on one leg and scored the game winner for the cup.

Martyn: 1 – The goals and the explosive energy. The deft touches and historic finishes. But mostly for the lab work.

James: 2 – One of the undercovered stories of the past three seasons is the rejuvenation of Altidore. Dispirited after a rough spell in England, he came to Toronto with questions, both his own and those asked of him. There have been glimpses over the previous two seasons of what kind of dominant force Altidore could be, but it was this that he put it all together to become one of the premier strikers in the league. His finishes, a combination of raw power and artistic precision have been a joy to watch. His playoff contributions, both the gutsy one against Columbus and the winner against Seattle will live long in the memory as legendary moments. When the story of TFC is told in 50 years, both will prove prominent in that tale. And that speech perfectly summed up the emotion of a long, successful season.

Mr. Tuktoyaktuk: 2 – Before this season we knew there was the AZ Alkmaar Jozy and the Everywhere Else Jozy. Now it’s clear we have the TFC Jozy and it feels great.

YellingAtSoccer: 4 – Came up huge when he had to.

Ruchesko: 4 – Fits and bursts as ever from the Voodoo Child. Still can’t decide if his displays at MAPFRE and in the final were penance for that tribute to Rivaldo tribute against Harrison.

Artur: 2 – Energy and more energy. Gave the team a lot of spirit.

Jeff: 5 – Big game player keeps him from being higher – meaning he seems to take some games off during the year – but not the big ones.  If he played play-off footy all year he’d be up at #2.

ZicoZay: 2 – He did carry the attacking load and managed his highest games played total this year.

Steve G.: 1 – The most valuable player for this team for this season. Yes, Bradley and Giovinco are more “MVP” than Jozy, but if you separate the entire career performance and look only at the 40 games played this season across all comps, no one player had a greater influence on total number of points than Jozy Altidore. At every comp, at every big moment, he delivered the biggest goals. He was the league MVP for the first 4 months of the season, and for the last 5 weeks he had the biggest goals vs Atlanta, vs NYRB, vs Columbus, and vs Seattle.

Alex: 1 – The goals, the speech , everything about his performance this year was superb.