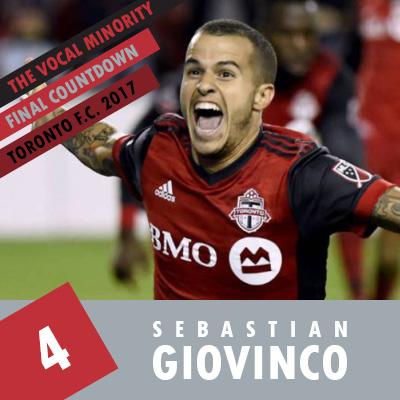 Mark: 4 – I said on the podcast once that if there’s a single player that I would start any club over with, it’s Sebastian Giovinco.  And technically, or statistically he’s not even the highest rated player on the club, but I stand by it.

Seba didn’t have the season any of us expected, but then again, most of us expected him to be shattering records and chasing boots of gold, and don’t get me wrong, 16 goals and six assists over 25 games isn’t a lazy haul either.  There’s a part of me that still thinks he’s got a 25-goal season, maybe even a 30.  My expectations of him are borderline unrealistic, largely due to how good he is and how good he can be.

Seba was out for a four game stretch near the end of the season with a hamstring problem.

He had stretches where he was trying to do it all : take the shot, take the free kick, run at the defenders instead of passing.  I don’t blame him, but it’s tough to watch, because you know he’s better than that.

When Vazquez joined the side, it felt like some of the role of magician was no longer on Seba’s shoulders.  He can go about playing his game and not concern himself as much with the minutia of ‘saving the game’ or whatever narrative you prefer. We’d still see the game or two of ‘do everything’ but he decidedly calmed the f— down as the season progressed.  With the pressure mounting of being the Greatest MLS Team in League History (TM), he didn’t make it about him saving the day.  Maybe he learned to completely trust everyone, regardless of stature, paycheque and FIFA rating.

Sure, we’d see petulant Seba.  He’d still get knocked around and the ref seemed to have no problem with that.  Sometimes he’d keep his shit together and sometimes he’d absolutely lose it.

I even voted him the 4th best player of this season, but there’s no one else I’d take the chance to build a side around.  We’ve seen what he’s capable of.  We’ve seen it all season.  The rating isn’t an indemnification of his role in the side, his role in the club, his role in the league.  It’s not an implication that he’s ‘shit’ or he’s no longer a great player.  He still is.  And I’d challenge anyone to name a better player over the last three seasons.

Duncan: 4 – Started off the season playing well, but continuing to hilariously miss all his free kicks. Had injury problems and came back and didn’t really look as good as he can, except for his free kicks which all of a sudden started to go in at a ridiculous rate again. Probably still the best and most dangerous player in the league, but should have been nowhere near the MVP talk looking strictly at this season. Enjoyed him hitting the post from a penalty twice, that’s pretty special.

Kristin: 4 – Seba did Seba things this year.  Was it his best year?  No.  But does that really matter?  Not really, because Seba in pretty good mode is still better than most.  There were issues with Seba’s game early on in the season, and we got to see a bit more of his petulant side than I’d like – and yes I will always complain about that when it affects the game; I don’t like the looking for fouls either – but I digress…  As the season wore on we got to see more of his unselfish side, and unselfish Seba does a lot of good things for his teammates – drawing defenses, sending in nice passes and just causing chaos so that other players can score.  Seba at his best is a delight to watch; whether scoring or assisting – he’s still the best player in the league and on his good days oh so much fun to watch.  My favourite thing from Seba this year (other than trophy presentation Seba which was hilarious), was his brace to win the Voyageurs Cup.  That was fun.

Tony: 4 – It seems odd to have Seba – the most gifted TFC player ever down at  the fourth spot. But, it wasn’t Seba’s most dominant season. There were more stretches this year where he struggled to impose himself but as mercurial as he may have been – he can still change a match with one deft move – but has talent like few – if not any – in MLS.

WhaleyStatic: 3 – Probably too low, still a stud, just love what VV brought to the team.

Martyn: 4 – Dead ball bully. Loved seeing him give as well as he received. But mostly that stage dance as Bradley brought the Cup past him. Lost the plot in the best way possible.

Mr. Tuktoyaktuk: 5 – Did Seba have an “off” season this year? Maybe. Fortunately, his off-form is pretty close to his on-form. Consistently a goal scoring threat whenever he stands over the ball.

MarkHSV: 4 – Another great year for Seba, and you could argue he could be #1 as well. Too many stellar players this year, that it was a bit tougher for Seba to stand out. But he was integral to the team, and made an impact in the playoffs this year as well. Hope after winning the cup that he still has the fire to do more next season.

Jeff: 3 – Not as individually dynamic as the first two years but those free-kicks, the pressure he takes off everyone else and the space he creates for Jozy and the rest of the attackers is worth it.

TuffyRocks: 2 – Ran a little hot and cold this year but, instead of sulking he became a better playmaker.

Aron: 3 – Still so fun to watch, but he seemed less able to take on 5 opposing players at once in 2017. His goals were very important and we needed him, take him out of the team and I wouldn’t own a “best MLS team ever etc” shirt.

Steve G.: 5 – I apologize right now to Seba for writing this. Seba still is and has been since the day he arrived “the greatest player” in MLS. Period. In fact, imo, he is the greatest player to ever play in MLS. What he has done in such a short time is unreal! But this season had 2 long stretches where Seba was not a difference maker on the pitch. Early in the season John Molinaro of Sportsnet actually wrote an article questioning if “Seba had lost it” and it was Jozy who carried the bulk of the teams scoring. And again deep into the playoffs, the same John Molinaro wrote a piece wondering if Seba’s antics and attitude would cost TFC the title. It is also true that Seba didn’t score a goal in open play in Sept, Oct, Nov, or Dec and without his freekick goal vs NYRB he was scoreless in the playoffs. However, you would be a complete fool to not notice what he was able to do in terms of spacing and passing to create all of the opportunities for Jozy that were then converted into “big goals.” Seba remains a legend but on a team this stacked and in its best year ever, I don’t think he had his best season. AND maybe thats the point! Maybe that’s exactly why the team was able to succeed to the highest level, because Seba put the team first (over and above his own stats) AND if that is true, maybe he should be number 1!!!!

Jen: 7 – He did good this year–and learned to share better with others. I’m proud of the little guy.

Ruchesko: 2 – Still not as good as his first season…

TweetKred: 5 – But for a couple of petulant moments where he probably should have gotten the calls but didn’t I would have ranked him above Morrow. Gio is electric when he is “on” and the passes he provided this year were as spectacular as his dead ball goals. He just spent too much time “off”. I may be comparing him to a higher level than the rest but such is the life of Formica Atomica!

Mel: 4 – Seba did Seba things as usual, but Seba also seemed more confident in his teammates this year. He realized he didn’t have to do it all himself.

ZicoZay: 6 – Definitely a marked man in this league, yet still scoring and can be one of the most remarkable dead ball specialist in the world game.

James: 4 – Giovinco, though struggling with injuries at key moments of the season, scored at a rate that rivaled his MVP winning season of 2015. That the same numbers were not required reveals the evolution of the squad from one dependant on the Italian dangerman to one where he is relegated to only a key cog. Make no mistake, he remains as dangerous as any attacker in MLS. And he has a lot more to give. Already shades of his new role, creating space for others, working hard for the team to succeed in lieu of him compiling statistics, has been prominent.