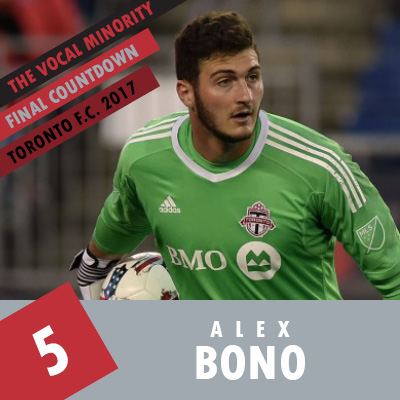 Kristin: 7 – Damn you Bones, you had to go and be good didn’t you?  That may seem like an odd sentiment, but if you follow me or listen to the show then you know of my fondness for Clint Irwin (and yes for Q but I gave up that fight) – Irwin is a more than capable MLS keeper and I was thrilled when TFC snatched him away from the Rapids.  Similarly I was sad when Irwin was injured in 2016 and again this past season.  What it meant was that Alex Bono was to step into his shoes and through the course of the season has more than proven himself – so much that I am quite content to have him as our Number 1 keeper.

We saw far less of his wandering ways, fewer instances of the need to shout “Where are you going? Get back!!”; instead we saw a more composed, more communicative, and more aware keeper.  He’s not superhuman or anything, but a number of games during the playoffs would have you singing “In the name of gloves” instead of “Lemon”.  It’s easier to be a good keeper when you’ve got a good defense in front of you, but the two need to work together for their to be clean sheets and record wins and so on.  However, it doesn’t mean that the occasional big save isn’t a testament to the young keeper’s skills – as well as being a lot of fun to watch.  Here are three of of his best from this past season; “Sweetest Thing” indeed.

Tony: 8 – Started of the year looking like Irwin’s backup but through the wild world of TFC GK woes, got his chance and held on to it. Improved as the season progressed and is now a perfectly solid MLS starter with room to grow.

Mark: 8 – He’s the number one. Congratulations.

Duncan: 6 – Can’t say I was happy to see him supplant Irwin again merely because of injury, but proved himself very much up to being the number one goalie. Made a lot of good saves, I don’t remember anything terrible from him, an much less of the nervy ‘where are you going?’ moments we saw last year. Has a legitimate case for playoffs MVP. #SweetestThing

MarkHSV: 7 – I wouldn’t say that Bono is an incredible goalkeeper, but he certainly saved TFC’s ass a handful of times this season with some ridiculous saves.

Jen: 6 – Came through in crucial moments so many damn times, and I don’t remember him fucking up much; really impressive.

WhaleyStatic: 5 – Wonder where all the people with their maple hardwoods for Q are who said Bono was no where near as good.

Aron: 5 – Wouldn’t be champs if we didn’t have him. Still made some fantastic errors mid-season… still deserves a lot of credit.

James: 5 – It would be far too easy to overlook the contributions of the goalkeeper in a team as offensively dominant as TFC; that would be a mistake. When the matches were close, such as in the playoffs, Bono was on top of his game, proving himself as valuable as any other player on the pitch. That he conceded just twice through five intense post-season matches – a penalty kick and a deflected shot from range – has not been appreciated enough. For a keeper so young to have such an impact, as well as his level-headedness and commitment to constantly improving, bodes well for his future.

Steve C.: 3 – Opposing players still haven’t found what they are looking for…yes, I went there and I immediately regretted it.

Ruchesko: 3 – Sometimes moved in mysterious ways, but the elevation over Irwin was well-earned.

JordyLike: 7 – Took a stranglehold on the starting role and never showed signs of giving it up. Rarely at fault, routinely spectacular. Arguably the finals MVP.

TuffyRocks: 5 – Bono is an excellent keeper but, has had a great defense in front of him.

Jeff: 7 – Confidence grows from the back and allows players to express themselves going forward because they know they can. Feel a bit of pain for Irwin but Bono is Mr. #1.  plus – what a great kid!!

TweetKred: 7 – He was constantly saying it was everyone in front of him that contributed to the clean sheets but for such a young keeper he showed up when it was necessary with some fantastic stops. Once he learned not to go on walkabout with half the offence in our end I was far less scared than I was early on in the season. Obligatory U2 Reference ==—>

Alex: 5 – TFC GK situation is clear for years to come, hopefully gets a chance to represent his country soon.

Mel: 5 – He saved us, literally and figuratively. I always felt confident in him as a backup, but he proved he can be more than that.

Mr. Tuktoyaktuk: 4 – Was underestimated by league analysts and other people who generally don’t watch TFC. In the finest tradition of #2s everywhere, got his change for a starting position and didn’t let it go. Warrants a high ranking for all the points he saved.

Artur: 5 – Amazing goalie with a bright future. Made some very important saves vs NYRB.

ZicoZay: 5 – He is large and mobile and anticipates when to play back on his line to parry or move out to close down an attacker in the most intimidating way.

Martyn: 5 – I owe many apologies for ever mourning the loss of Q when we brought Bono aboard. I was wrong. And I am sorry.

Steve G.: 3 – Big save after big save. At every corner. At every turn Alex Bono snuffed the doubters. Was this the greatest team ever? YEs. But they never win any of the 3 parts of the treble without clear game winning saves from Bono in every competition. I know it seems sacrilege to have him at number 3 over some other names, but how can the keeper of the best team every, with a record number of wins and shutouts not be a top 3 player for the season recap?