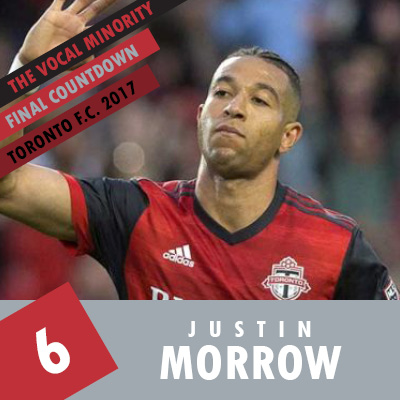 Kristin: 6 – Justin Morrow had a really good year.  I know that I’m perceived as biased, but it’s hard to look at that season and not say great things about Morrow (I’m looking at you low rankers).  Building off a very good 2016 season, Morrow put that missed PK behind him and excelled.  He took to Greg Vanney’s change to the 3-5-2 for most of the season and ran with it – it allowed him to capitalize on his attacking instincts while still being a solid defender.  He had fewer yellow cards, showing some smarter defending, he also bested his previous year’s goal total of five, with eight goals on the season – including the elusive hat trick.  In fact, let’s give it a look shall we?

That was a fun day – plus it’s always a good day when I get to brag on Morrow’s skills.  On top of all the goals Morrow got a call up to the USMNT for the Gold Cup, won player of the week, and was runner up for MLS defender of the year – fantastic stuff.

Morrow’s been with the team for the past four seasons and still remains one of the best bits of business that Toronto FC ever did; his signing was also one of the first indications that the team was finally taking things seriously by bringing in solid MLS veteran players – the fact that Morrow has continued to improve and remains with the team is great for the team (not for Ashtone Morgan sadly).  His being this low on the list is just a testament to the quality of the team.

Mark: 5 – Had an excellent season as a winger, but somehow people think he’s a defender still. Odd.

Tony: 5 – We needle Morrow on the podcast a lot but he’s a great MLS wing back. Showed more offensive prowess this year and  never really hurts the team defensively in a major way. An MLS star for sure.

Duncan: 5 – A very good year for Justin. Spent time in the middle or on the right covering for injuries, but was generally a very good left winger, and legitimate goal threat, including a hat trick. Also got some games with the US and won the Gold Cup. I think it’s fair he didn’t win defender of the year, but If best offensive defender was a thing, then he’d probably have won that.

Jen: 8 – The day he got his hat trick was one of my high points of the season. This is probably because Allan was wrong. Don’t let him tell you that positional nonsense.

Mel: 6 – This was his best season for Toronto so far. I was so excited for him when he got called to the USMNT. Well deserved.

Mr. Tuktoyaktuk: 6 – Part of the versatile defensive machine but was a goal machine too. His hat trick vs RBNY was spectacular.

Artur: 7 – Teams did not know how to defend against this left back with attacking intuition.

James: 6 – Most will trace the revolution at TFC to the bigger named acquisitions like Bradley, Altidore, and Giovinco, but it was really Morrow who got the ball rolling in terms of changing the nature of the side. He was the first of this current crop to arrive, at the end of the 2013 season, starting a pattern of leaning heavily on players who have seen and done it all in MLS. This season was his finest in red. The attacking element has always been a part of his game, but that ability to insert himself into moves, becoming the open man up top when the stars were well-covered caused so many problems for the opposition.

Aron: 6 – The middle of the season was amazing for him, the rest was really solid, solid enough to forget his hair.

Jeff: 10 –  I think I have come to expect a great performance each week from JMo and maybe that hurts his ranking – great player ‘steady Eddie’ out there.

MarkHSV: 5 – Justin Morrow seems to get better season, but I can’t ever rank him higher than 5th place. A testament to the overall quality of the team.

Martyn: 7 – Don’t know if last year’s crossbar was his driving force. Last year’s PK loss was never his fault. But if it stoked his fire, then bless him. Long Live Hat Tricks from the Garbage area.

TweetKred: 4 – Strong in defense and chipping in with way more goals than his position should allow. Just “full of running” as those crazy brits say. Never took a break which is why I put him above Seba.

Steve G.: 7 – A banner year for Morrow. It would have been easy for him to hang his head and hide after missing the Pen in the 2016 finals. But instead he returned to the club determined to improve and be better. And he was! Already a top scoring defender in MLS in 2016, Morrow improved on his scoring record and added to that a runner up for defender of the year award. Plus he earned himself his first call up to the USMNT during the Gold Cup winning run in the summer & netted the hat trick to clinch to supporters shield. He has firmly cemented himself as a difference maker across this league and in a system that features its wingbacks he is both an offensive threat to score in every match AND a stand out defender shutting down the opposing teams top wingers. A great player.