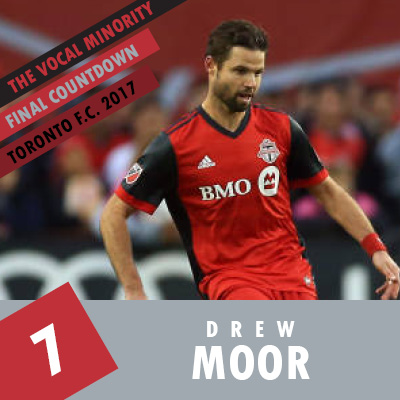 Duncan: 11 – Bit of a rough year for Drew. Finding out about heart issues can’t be a fun time, and when he got back from that, he never quite looked as good as he did before. Looked just a bit slow which left him having to make last ditch tackles, or blocks which is always a dangerous situation for a defender to put himself in and for a while there towards the end of the season he was called for fouls and handballs in important places and situations a lot. It’s all very Steven Caldwell. Hopefully comes back next year fully fit and plays his game as well as he organises others.

Drew may have lost a step this year but here’s one of his saves late in the season during the playoffs:

And then this delightful goal off an audacious Victor Vazquez free kick – he’s the only one paying attention:

Mark: 10 – Started strong, seemingly had a slight decline as the season progressed. Nobody I’d rather have in the league to anchor the defense.

Kristin: 8 – Still the rock in the centre of the defense, even if he did seem to slow down a bit towards the end of the season.  But a few calamitous adventures aside (not quite ready to take over the Caldwell Arms), he keeps that backline organized and allows the more adventurous defenders to go forward. Has been instrumental in the major change to TFC’s defense – glad he’s returning.

Tony: 6 – While he definitely lost a step (and maybe another step as the season wore on) you can’t discredit the wily veteran’s effect on the other defenders around him.  Fully into being in TFC red and coming back to have another go, Moor was a lynchpin but will need to be counted on less as his legs get the best of him.

ZicoZay: 13 – A lot sits on his shoulders, he has good teammates surrounding him, perhaps he shouldn’t over-play the ball at times.

Alex: 9 – A solid CB who anchored the back 3 , will continue to Mentor Younger CBs.

Martyn: 10 – Glad that his couple mis-steps didn’t end up costing us. It would not have been a fair representation of his value to us. Calm on the backline. Who knew???

TuffyRocks: 10 – Does what a Dman is supposed to.

Ruchesko: 9 – The happy times continue for the Moor of Toronto. Hope they keep him, unless Venezia come knocking.

MarkHSV: 9 – Moor might be slowing down a bit, but he is still a calming presence in the defence and a solid workhorse. Happy to have him back next season.

Aron: 7 – *insert comment* he did he job really well most of the time, and pretty well some of the time.

Steve G.: 8 – The captain of the defence and the back line, he is a rock. I do think that over the last month there were some moments where we saw him get exposed (PK vs NYRB, PK vs ATL) but for the most part how can you criticize what he has done for this club this season? I think its fair to say- NO Drew Moor= NO Treble. He has changed the mentality of this club and its back line.

Jeff: 6 – Seemed to be a step behind leading into the play-offs -but his experience, leadership and WINNING ATTITUDE are worth it.  Leadership can not be undervalued – he is a leader in all ways possible.

JordyLike: 9 – Definite signs of slowing down evident throughout the year, but a great veteran presence who anchors that backline. Likely would have looked a lot worse on TFC teams of old that would have no support to back him up in his moments of less than ideal play.

YellingAtSoccer: 11 – There’s always the worry that his defending in the box was going to lead to a PK.

TweetKred: 9 – I though people were too harsh on Drew for the moments where it looked like “he’s lost a step”. Flashbacks to Caldwell’s final few games have given us another variant of our TFC-PTSD but Moor was solid. He was the leader of that back line even if Mavinga was the star.

Artur: 8 – My boy Drew was solid. Expanded on his trophies and family.

James: 8 – It is almost a shame that a player as vital to Toronto’s success since he joined falls as low on this list as Moor does. Such is the fate of a no-flash defender on a team stacked with attacking talent. His calming influence, ability to communicate and organize has freed the team. Watch how often Bradley leans on Moor, in building attacks and in sorting out the back-line. Not every player has earned that trust. Additionally, Moor has a knack for coming up with big goals on timely occasions.

Mel: 8 – He seemed to lose a step a bit as the season came to a close, but there’s still no one I’d rather have on our backline.