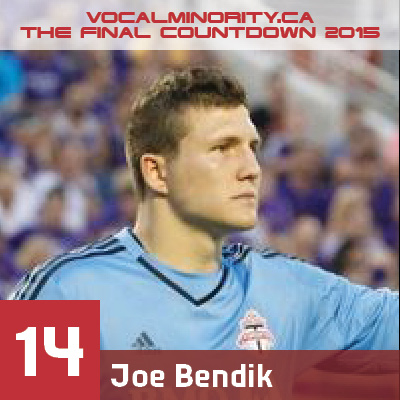 EDIT: All the below was written before the announcement that Bendik’s option wasn’t picked up. Not a surprise really, I imagine he’ll pass through the first round of the waiver draft unclaimed. After that he’s got a shot at getting a job somewhere for less. Best of luck to him.

Mark: 7. Super Pickle.  Joebergine.  The goalie who took Frei’s job.  These are some of the nicknames that most associate with my No. 1 keeper, Joseph T. Bendik.  An injury saw Bendik lose his starting place to that other guy, and, ironically, may have lost his job to him.  As an ardent supporter of his play, the reality is that the differences between Bendik and that other guy are marginal and debatable.  I prefer his positioning and ability to catch balls better, but it really feels like a six-of-one, half-a-dozen of the other scenario as neither are a poor choice.  Bendik may be considered surplus talent at this stage, so only time will tell if he’ll be back in red… erm, green, no, purple… for next season.

Duncan: 11. Is a slightly less than average MLS goalie. Neither the cause or the solution to TFC’s defensive woes, I don’t feel like he was as good as some people tried to make him out to be, and he very rarely stole points we didn’t deserve, but it would be harsh to blame him for TFC’s woes. Konopka did alright so fair enough he didn’t get his job back right away, was very harsh to then take it from him again. Him coming in for that one game against Columbus at the end was a particularly confusing decision from Vanney.  Given his salary, you’d have to think he’d be gone next year as TFC try to keep themselves under the cap. As noted elsewhere, his pre game PSA attempts will be missed.

Tony: 17. We will miss his scoreboard PSA’s when his Stefan Frei-esque salary is deemed too high for a back-up.

Kristin: 12. Joebergine! Ah he was OK – never hated him, never loved him. Did some nice things but I’ve never viewed him as a starting keeper.

Mark HSV 16. He lost his spot to Konopka. Not a good thing. I don’t mind Bendik, but it’s time for TFC to find a real starting keeper. You know, like Stefan Frei.

Yelling at soccer 16. Was business as usual from him. Too much pricetag

Jordylike 16. Decent at stopping shots, fantastic at being out of position. Rightfully lost the starting gig.

Jason Anderson 11. Konopka is actually better, but he never tossed that dirtbag Felipe off the field.

Ben Bromley 11. Tossed Felipe? Check plus in my book

Alex Lach 12. An average Season for Joe, at times was good , at times average and at times you thought he didn’t know where the net was. TFC was lucky to have a good backup because the season could have been a lot different.

Mike Newell 13. Came into 2015 as the clear number 1, ended the season as the no. 2 and with an unclear future at TFC. He had some howlers this season, but also made some key saves that kept the team in the game. Wasn’t 100% the issue in conceding all those goals, as Konopka had similar issues. But as a GK in MLS you are asked to make the saves you’re supposed to make, and once and a while steal a game. He struggled at both hence the demotion.

Matt Goshert 21. He’s a backup keeper. Good for him.

Enrico S 19. He’s never been a great keeper. A good shot stopper, but this year was not a great one for him

Aaron Bennett: 16. In past seasons Joe’s on-field performances showed glimpse of potential. Unfortunately this year didn’t exactly go his way. I can’t decide if that was due to the horrible display of defending or a drop off in quality on his part. No one can deny the leadership Joe brings to the Locker room and for that reason I believe he deserves another chance at the number one spot.