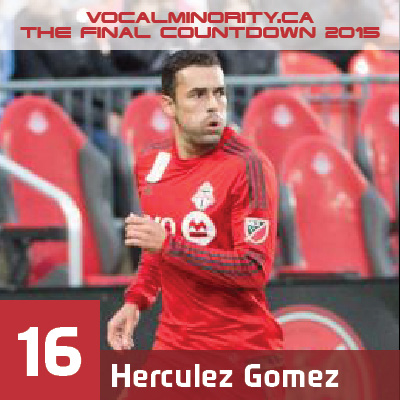 Mark: 12 When Toronto FC made some deals to be the first in line to sign Herculez Gomez, there were more than a few eyebrows raised.  Now out of favour in Mexico, Herculez re-entered the MLS fold and… ultimately found himself out of favour in Toronto.  One of the more ‘head scratching’ moves, Herculez joined the club in August and received very limited playing time. Not without highlights, he scored the goal that put them into the playoffs and Vic Rauter excitedly called his name while handling the ball, which was television gold.

Duncan 18. Not quite sure why he barely ever played, definitely one of the more curious things in this season. He provided 2 good moments. First, the initial few minutes after his signing, full of memories of him looking very good for Santos Laguna, thoughts of him as an ex USMNT player and a successful player in Mexico and thinking ‘holy shit, this’ll be good’. Unfortunately a quick look on wikipedia brought the excitement down a notch, but still has to be an upgrade over Findley right?  Then of course that goal against New York, historic, playoff clinching and a very good bit of finishing to take advantage of an error after a long and lonely game of battling as a lone forward and not seeing much of the ball. Quite what he did to Greg Vanney to barely ever make it off the bench and into the starting xi is a mystery. Entertaining and much more interactive and responsive on twitter than your regular athlete so that’s a plus.

Tony: 18. “OMG WE SIGNED HERCULEZ GOMEZ!” Then nothing. What was the reasoning if you didn’t plan on using him? But you start Findley?

Kristin: 17 Herculez! One of the most expensive bench warmers ever. So much for heroes of song and story.

Mark HSV 15. He didn’t get to play much for some reason, but he looked good when he did play. Why splash cash for a big name if you don’t intend to play him? I hope he is the first option off the bench in a striker position next season. Get rid of Moore and Findley.

Yelling at soccer 13 Only so high because of that goal… Also probably tried to bang Vanney’s wife leaving him on the bench. PROVE ME WRONG

TC St Clair 11. Short term member, put in a key goal, with three shots taken, two on target. Super sub and the best forward outside of our starters.

Jordylike 15. Maybe we signed him and then intentionally barely played him as revenge for those Santos games. Only explanation I have.

Jason Anderson 8. This is true: I promised to help him move to DC if United had signed him.

Ben Bromley 14. Unfortunately, it might just be over for Herc.

Alex Lach 22. A high price signing that brought some flair to TFC’s attacking third however at times was misused.

Mike Newell 20. Scored one goal, but it was a big one on a big night, pretty much the only reason he’s not near the bottom of the list. Next season will be the proper time to judge him.

Matt Goshert 8. Does he deserve to be ranked this high? I don’t know, he’s American so I’ll give it to him.

Enrico S 13. His off field contributions might be better than his on field ones. Both get trumped by his Twitter cntributions

Aaron Bennett: 14. Herk was a great addition. He didn’t play much this year. I found him to be very aggressive. Fighting for every 50/50 ball. Not much more we can ask.