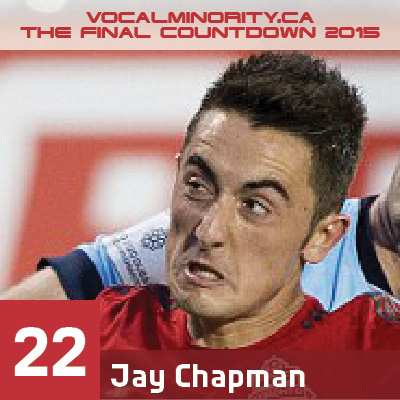 Tony: 24. Jay “Chappers” Chapman – the guy TFC zoinked away from the SuperDraft in the nick of time. Despite a mere 202 minutes with the big club in 2015, it does seem like if any of the young Canadians (after Jonathan Osorio) are going to break into the side – it will be him.

Splitting his time between TFC and TFC II, it’s clear that Chapman has some raw chops with a bit of offensive flair out of the midfield slot. This is an area where TFC could use more depth so there is reason to hope that the lanky Bramptonian may be able to slowly carve more minutes for himself and build on his 2015 introduction to professional footballing.

Duncan: 19 A promising season. There are very few moments I can specifically remember from him, but he always seemed like he belonged when he got subbed on, so that’s something.

Kristin: 22. Yay for being a Canadian academy product? Did well enough I guess? Need to see more.

Mark HSV 21. Hopefully has a bright future. Would have liked to see him play more.

TC St Clair 14. I rank my Canadians higher I suppose. Either way, he played well as a sub. Had a good match against Manchester City too.

Jordylike 23. Liked what I’ve seen so far, look forward to him being improperly used for TFC and Canada for years to come.

Jason Anderson 22. Hopefully he is higher up this list next year. Vanney should find him more minutes.

Richard Wyatt 16. Looked pretty good against Man City’s U-12 side in the friendly

Alex Lach 22. When on the field, made sense why TFC was so high on him, good passer, agile and most importanlty not agfraid to be creative in tight spaces. Hopefully next season gets a bigger chance to show his skills

Mike Newell 19. Showed flashes of what he could be and got more minutes than most expected. One of those players who is probably too good for USL Pro, but not quite ready to play everyday at senior level. Will get his minutes increased a bit, but not by much in 2016.

Matt Goshert 22. He can score goals in USL. So he’s got that going for him. Which is nice

Aaron Bennett: 22.  Chapmans rookie season went as expected. He was very tidy on the ball and didn’t seem to shy away from a challenge. Hopefully he continues to develop with this team.