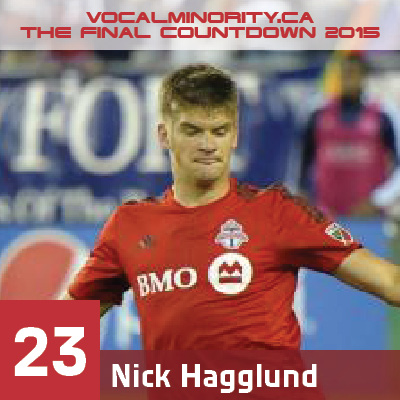 Kristin: 24.  *My initial comment on the ranking was: ‘He’s never going to score a goal with these types of minutes. Never good enough to play much even with the backline desperation all season – not even when finally 100% healthy’, but as Nick is on my slate of players I’ll expand a bit.*

Really it’s all Jozy Altidore’s fault.  If Nick Hagglund hadn’t given up his number to Altidore before the start of the season he’d have had a better season.  I just assume the Samson like qualities of the number as the reason because why else (other than injury and illness) did a bonafide centre-back spend that much time on the bench this season?

Now admittedly Hagglund saw far more time as a rookie last year than he really should have – once again Toronto FC defensive shortcomings asking too much of such a young player.  But Hagglund acquitted himself well enough; showing decent athleticism and some ability in the air and seemed to be on track to be a solid back-up to what was to be the presumptive pairing of Caldwell and Perquis – that’s all part of winning the draft!

Then when Caldwell went down injured early (two games) at the start of the season he was unsurprisingly given the starting role next to Perquis.  At the time this didn’t really upset too many as he’d impressed enough in 2014 and many had hoped to see him get more minutes. However, while he was never terrible he wasn’t so fantastic that Vanney and Co. didn’t look elsewhere to shore up the backline. And then of course there was that disastrous (and completely not his fault) turn at right back against Dallas – I bet he still has nightmares about getting torched over and over again – that did nothing to improve his chances at staying a starter.

Either way by the time it looked as though he might get some more playing time in July he was struck down by appendicitis, and then after he’d recovered even spending time gaining fitness and minutes with TFC II didn’t see him back in the starting XI.  Is this just a sophmore slump?  Is he a victim of a team that couldn’t figure out how to play defense with more talented players so he suffered by comparison?  Or something behind the scenes that we don’t know about?  Because it is mystifying for a team with that many defensive woes to have left a perfectly good (we assume) CB on the bench for most of the season.  Presumably he’ll be back next season and I think he deserves that opportunity – this team has rarely tried to build a youthful core looking to the future and if Hagglund can develop his game and mature in the upcoming season he could be a very useful player in the coming years.

Duncan: 22. Bit of a puzzle this one really. Given how bad TFC’s centre backs often looked, the fact that Hagglund wasn’t given a chance in the second half of the season is very odd. Having your appendix out surely can’t be that serious of a surgery. That Dallas game is probably tied with Jackson v Montreal for being the worst 45 minutes of any of our right backs this season, which is saying something.

Tony: 21. Definitely a sophomore slide for the promising 2014 rookie. Surprisingly sparse use this season and a now questionable future at TFC.

Mark: 23. For all of our jokes of him being a forward, given who played so much…

Mark HSV 25. Hagglund had a bad season. Sophomore slump I guess? He was really burned early on, and then maybe lost his confidence. I hope he rebounds because his first season was a pleasant surprise.

Yelling at soccer 18. Hard to rate, didn’t get much time.

Jordylike 22. Would be on the side of milk cartons if that was still a thing. Torched at RB, but would’ve liked to see him used centrally more often.

Jason Anderson 26. Probably harsh, but I didn’t like that attempt to present him as a ROTY contender against Birnbaum.

Richard Wyatt 13. 2014 MLS Fantasy hero with a haircut you could set your watch to. Criminally underused by defensive specialist Greg Vanney

Alex Lach 24. A forgotten season for the young CB, injury, depth chart placement and youth didn’t not help the young defender at all. TFC could have used his talents down the stretch especially when the defense seemed to be shaky.

Mike Newell 18. Came into the season as the first option of the bench CB, then Caldwell got hurt and got thrust into the no.2 job beside Perquis. Struggled a bit and seemed to regress in someways. It looked like the torrid first 20 minutes in Dallas, and the roasting he got from Fabian Castello back in April shot his confidence a bit. Then he got hurt, and barely played after that. Still a first teamer, but 2016 will probably be his make or break year.

Matt Goshert 23. He’s from Cincinnati, which is barely part of Ohio. I think it really is only legally. He gets a low ranking.

Enrico S 18. This kid should be, and needs to be so much more.