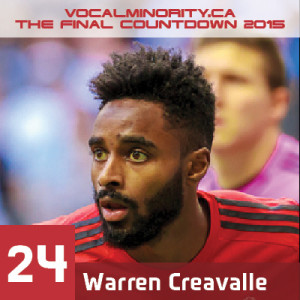 Duncan: 17. 2015 really wasn’t fair to Warren Creavalle. He’s a decent MLS depth level player, ideally a midfielder, who’d had a reasonably steady couple of years at Houston under Dominic Kinnear, and he came into the season as first choice right back.  Now he’s with Philadelphia Union and barely playing, an ending as ugly as those few right back games he actually played for TFC.  Make no mistake there was a lot of ugliness packed into just a few games. There was Kekuta Manneh repeatedly victimising him, attacking the space Creavalle vacated when pushing forward that wasn’t properly covered by the midfield or centre backs. There was Justin Meram repeatedly victimising him as the entire team got sucked over to the left and then the ball was played into the middle and Creavalle was left to try win the header. Noted Tactical master Frank Yallop caught on and firmly aimed his speedy attackers right at Creavalle and they repeatedly victimised him, a horrorshow ended only when Creavalle, left alone again after the entire team got sucked over to the left, had to foul Accam to stop him getting clear through on goal, and thus earned himself a second yellow card.  I’m here to say ‘it’s not your fault Warren, it’s not your fault. It’s not. Your. Fault!’ As proven by the very next game where Nick Hagglund covered his suspension, and lo and behold the team gave him no help and Dallas repeatedly victimised him.

This obviously seems to be leading to ‘it was Greg Vanney’s fault’ and yes, yes it was. Not for the idea of how he wanted Creavalle and the other poor saps thrown into the right back spot despite not being right backs to play, that’s not a bad idea at all, and there were certainly moments in pre season and those first few games where you could see the benefits of it going forward, and hey if you’re going to ask your full back to be a midfielder, might as well try a midfielder there and see if it works.  It’s mainly Vanney’s fault for just how long it took him to realise it wasn’t working and move on.

Anyway, eventually Vanney did learn, formations were tweaked, and Creavalle didn’t darken the right back spot again. He did make a few other appearances after that, mainly as a sub and almost exclusively in midfield, and what do you know he wasn’t terrible there, back to his ‘shouldn’t be a starter but can do a basic job and not let you down’ standard, and he even scored a goal, a low hard shot from outside the box, just inside the near post, against San Jose. Check it out.

Then after he’d found his natural place in the squad, he was traded, off to Philadelphia for a 2nd round SuperDraft pick. Hopefully, whether there or elsewhere (wouldn’t surprise me to see him in the waiver draft this year) he can get his solid MLS depth player career back on track.

Tony: 22. Only a “Cameo” appearance this year. Played out of position until played out of town.

Kristin: 21 Regulated right on out of town. Sorry Warren it wasn’t all your fault but best you fade away.

Mark HSV: 18 I know Creavalle had some shit games, but I think he was a victim of Vanney’s weird tactics. He shouldn’t have been playing RB, or if he had to, he should have been tasked with staying back instead of recklessly joining the attack. However I think Creavalle has decent skill and an incredible work rate. He made some crazy tackles or cutting out passes early on, and that was fun to watch. I would have been happy having him as a depth midfielder all season instead of being Vanney’s early season fall-guy.

Jordylike Horrific at right back, fantastic at hair. Improperly used most of the year, properly used in a trade.

Zicogold 21 Is not a defender.

Jason Anderson 17 Surely Creavalle is actually a member of the Native Tongues hip-hop collective of the late 80s/early 90s whose time machine broke.

Ben Bromley 24 Oh no. No, thank you. I’m allergic to Creavalle, but it looks amazing.

Alex Lach 21. Often the cause of panic when coming onto the pitch, was usually misused in a position that he could never grasp, useful midfielder but not a good defender which cost TFC at times.

Mike Newell 24 Was a whipping boy for a lot of supporters, but he was thrust into a position that he was not best suited for. That said he was awful at times and his delightful cross to Thomas McNamara at Yankee stadium while “trying” to clear the area cost the team maximum points, and squandered Seba’s brilliant 12 minute hat trick. Trade was needed for both sides.

Matt Goshert 27 – I hope that draft pick works out well for you guys… how many draft picks is that with the exchange rate?

Aaron Bennett 17 Creavalle was miss used from the start. He is not a defender and was exposed regularly in the right back role. Some of his best displays came when he was allowed to attach. That being said transferring him was the correct call. He doesn’t provide enough competition to our attacking payers.