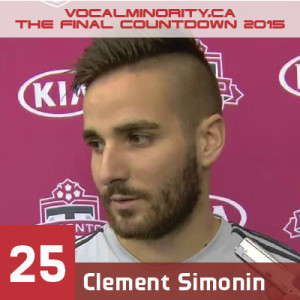 Mark: 20. Toronto almost unearthed a gem in this one.  Simonin was a first round draft pick out of NC State, but thankfully earned a proper footballing pedigree at Lorient.  Showed plenty of early promise as a defender, but injuries kept the rookie out of the game for the majority of the season, making only two appearances for TFC, and one for the lesser sequel of TFC II.  Hopefully the young Frenchman can make a full recovery and return healthy next season.

Duncan: 24. A strange draft pick, an official signing with the whiff of MLS ‘rule’ breaking, a game, an injury, another game, another injury. He didn’t look terrible in the games he did play, so that’s something. Taking a flyer on him on draft day certainly didn’t work out this year, hopefully future years will be more healthy and productive

Tony: 25. Club were very high on Simonin in pre-season but injuries make him a question mark. What’s French for “Sick Note”?

Kristin: 23. The French Connection, we hardly knew ye! Season ending injury put an end to any hopes that he’d storm the gates in his rookie season.

Mark_HSV: 23 He looked solid in his couple of outings. A potential CB for the future of TFC.

TC St Clair 13 OK he only played and started TWO games before his freak accident. But I think the rookie held his own and could have had a Hagglund-like rookie seasosn. Too bad though.

Jordylike 25 He is definitely probably a Toronto FC player, this I know for sure. I think.

Jason Anderson 27 Didn’t play AND is a TFC defender, so clearly this is a correct ranking.

Alex Lach 23. A insurance policy of sorts, club seems to high on his talents , hopefully he develops into a potentially useful CB, thrown into the fire a few times by the club.

Mike Newell 23 Another incomplete grade due to injury and playing the majority of games at TFC II, but when he did play for the senior side he actually looked alright. Made typical rookie errors, but if he can stay fit he might be something. Like Hamilton he needs a full season in USL Pro.

Enrico S 25. A non factor with the big club.