Posted By Kristin Knowles on Jan 28, 2015 in News, Uncategorized | 4 comments 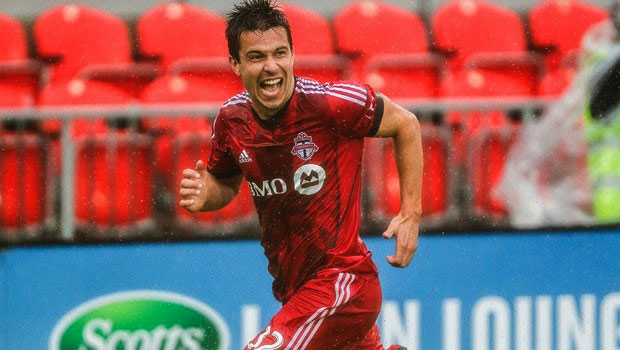 He scores when he’s wet. Does it rain a lot in Ottawa?

It’s truly over – #WetWiedeman will be seen no more at BMO Field for Toronto FC.  Sigh.  What?  I can mourn the loss of my favourite hashtag creation can’t I?

Andrew Wiedeman was one of the first players that TFC released after the season ended and instead of trying to catch on with another MLS side he’s signed with Ottawa Fury FC of the NASL.  His release by Toronto wasn’t a huge surprise – although I wouldn’t have been shocked had they kept him on as depth – but clearly he wasn’t in the team’s plans going forward so the early release was the logical move.  Joining his former teammate Ryan Richter in Ottawa is likely the most logical move for Wiedeman as at this stage of his career; an NASL club is more his level after several years in MLS and being unable to solidify a place with the first team.  He’s a talented player who should do well for Ottawa and then will of course score the goal that knocks Toronto out of the Voyageurs Cup this summer; but until then good luck to him in the nation’s capital!

Wieds wasn’t a shining star for Toronto – an OK to decent striker that never really clicked with the first team, he made his debut in the game against the New England Revolution that Danny Koevermans (he subbed on for him actually), suffered the injury that pretty much ended his career.  With only four goals to his name in MLS competitions for TFC he wasn’t exactly lighting it up on the pitch.  A player with some talent and a strong work ethic, the ‘best touch in the modern era’ (Wiedeman should make Paul Mariner retract that), just hasn’t been able to rise up a level to keep a place in the first team and was rarely used as a sub.  Although anyone that scores against an EPL team should get some props, no?

However Wiedeman is best known for his actions off the pitch as one of the club’s best community advocates – constantly willing to participate in public events for charity, supporting Sick Kids Hospital (if you’ve not seen the Sick Kids Prom video click here), attending Pride, and just being a fantastic face for Toronto FC in the community.  Add to that his twitter game – honestly one of the funniest guys to follow on twitter, footy related or no – and his status as a fan favourite (off the pitch) was cemented early on.  Club ambassadors are hard to come by and ones that are really committed to helping even more so, but Wiedeman embraced the role and for that reason alone I’ll miss him at TFC. On the pitch, maybe not so much.  But we’ll always have #WetWiedeman.