Leave at the Apollon! Doneil Henry heading to Hammers 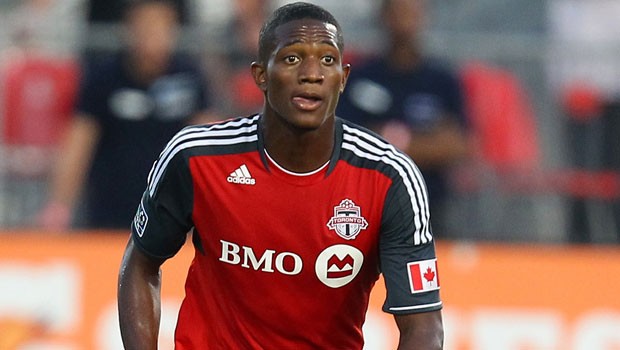 Doneil’s just as confused as the rest of us as to how exactly this went down.

Good news! That Apollon Limassol kit with number 4 and “HENRY” on the back arrived just in time for Christmas! Baaaaad news! Do you like claret and blue instead?

In a move so rife with ML-esque style bureaucracy, intrigue and mystery that streetz Don Garber would say “Damn son, dat’s tight” – Toronto FC’s homegrown defender and Canadian International Doneil Henry is set to join West Ham of the English Premier League when the January transfer window opens. With the granting of a British work permit today, the path is now clear for Henry to pursue his Premiership dream but it’s how he got it where the story gets fun.

For us rubes in Toronto, all we knew for the last couple of months was that Henry had been transferred to Apollon of the mighty Cypriot First Division and had quietly been loaned back to TFC for 2014. It seemed a slightly peculiar move on the surface – after all, the big defender had been on trial with West Ham prior. The move was explained fairly enough by most as his gateway to bigger European leagues. “Most” didn’t include Henry, his agents and the clubs involved.

No, the story seemingly breaks down like so. Henry was transferred to Apollon earlier in the year. Officially in the employ of the Cypriot club he was then allowed to potentially buy property on the Mediterranean isle. Once a property owner in Cyprus, one can apply for a passport and with said passport’s connections to Europe – an easier path to a British work permit. Presto! “Goodbye” Tsirion Stadium, “alright guv’nor” to Upton Park.

If Doneil did buy some property in Cyprus we expect it to be a really promising hotel that has great facilities but every now and again the toilet explodes and ruins your day. Anyhoo.

The move really turns out well for all parties. TFC gets a chunk of the original transfer after Uncle Don takes his cut; Apollon will get some sweet West Ham pounds to invest in UEFA’s # 1 citrus-scented home cleaning product – “LIMASSOL!” and West Ham ends up with a young pro with plenty of tools and potential.

For Henry – and in a roundabout way the Canadian National side – it’s a win-win. The Brampton bull in a china shop will get to elevate his craft under a manager in Sam Allardyce who has a particularly good record working with big, strong blunt instrument defenders. The West Ham style will be a quicker, more forceful version of what Henry has seen in MLS but will not seem like an alien concept. Becoming a better defender in this environment will likely suit the tactics employed by Canada in CONCACAF qualifiers where finesse tactical prowess is rarely a prerequisite.

So what now for Doneil Henry once the transfer goes through? While he has the build, the tools and the experience, he is likely still too raw and lacking the tactical sharpness to step into Premier League duties. West Ham has a solid defensive unit and while there could be a place on the end of the bench, it would seem far more likely that Henry spends this season and possibly next in the Championship on loan… where he will painfully foul Jermain Defoe after QPR gets relegated this season. BURN!!!

Like any good budget airline patron, Henry has travelled the difficult but promising Toronto-Limassol-Gatwick route on his path to bigger and better things. In a few years when “Doughneeyou’ll ‘Enry” is hopefully blowing bubbles with Russell Brand in the Olympic Stadium, the smell of pie ‘n mash and jellied eels wafting through the air, at least TFC can say they got something right for once. Setting him free.