Posted By Duncan Fletcher on Jan 9, 2015 in News, Uncategorized | 2 comments 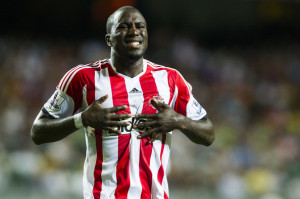 When i think about TFC, I touch myself!

Wheeeeeee! things are picking up nicely now. After this week’s initial rumour of Damien Perquis, half heartedly confirmed as a target by the club, and the appointments of Stuart Neely and Robin Fraser in coaching roles, the week went out with a bang. Thursday saw Emmanuel Adebayor linked, though that seemed very much like a reporter lazily picking names to fill out an article about Adebayor saying he’d be interested in going to MLS. Hey, TFC need a striker! they like to do crazy things, let’s put them. Who else? ooh Seattle, they just traded Yedlin to Spurs, that’s a good enough link.  I’m not putting much stock in that one, and I’m glad of that, it’d be a guaranteed hot mess of sulking and disgruntlement, faster than you can say Jermain Defoe.  He’s sulked his way through a bunch of bigger, more professional, less dysfunctional clubs, who thinks TFC is a great place for that kind of player to settle in and finally be content? Nobody. Let’s ask Dr Cox for an official comment.

Friday afternoon saw the Italian media getting in on the act, a report who’s unlikeliness was somewhat set off by the specificity of just what they say TFC are offering to Juventus for Sebastian Giovinco. Yes, Juventus. Also, Italian international and not even past his 28th birthday yet. I can’t see that happening, but i’d be more than happy to see him come in to be the number 10 Gilberto’s pining for. After all he’s nicknamed the Atomic Ant. That’s fun even if you don’t write for a blog with a heavy bias towards malarkey, for us, it’d be gold.

The one that has the most legs though is Jozy Altidore. The American international apparently looking to come back to MLS after his time with Sunderland in England has proven a massive bust.  He had previously done ok of course in MLS with New York Red Bulls and with AZ Alkmaar in the Eredivisie and has a decent record with the US, 25 goals in 76 games, but there’s definitely the air of his career in Europe fizzling out and so he’s looking for a big payday while he can still get it, and thinking MLS is the best place to find that.  Taylor Twellman tweeted that Portland, New York Red Bulls and Toronto were the three teams pursuing him, though a later update said his demands were a bit too rich for New York, and TFC confirmed that at the very least they have ‘thrown their hat in the ring’.  Sunderland manager Gus Poyet also confirmed his eagerness to be rid of Altidore, suggesting the inquiries go back months but have dropped off recently.

Would it work? My initial reaction on seeing the (mostly American based) initial excitement at the thought of his return was to dismiss that and think a very straight forward nope, I wouldn’t want him here, he’s become a bit of a joke at Sunderland and surely there’s better things to be doing with a DP spot (like a young Italian international number 10 perhaps).

Thinking about it more and I soften to the idea bit, after all he’s got history of working well with Michael Bradley, and has a history of scoring at a good rate in less competitive leagues than England, there are plenty of people who couldn’t make it in the EPL who are doing or would do just fine in MLS. Combining him with Gilberto could work very well indeed and given a full season I’d be confident of predicting 15-20 goals from him, and hey, if he’s going to be a DP, then we don’t need to worry about how stupid the salary gets beyond the initial cap hit of whatever it might be under the new CBA. Also, if it goes wrong, if TFC work their magic, knowing that his career being flushed down the shitter would also hurt the USMNT would somewhat soften the blow wouldn’t it? Either he helps TFC or TFC hurts the US, win win all round really.

But just how much of a payday is he looking for? Apparently a Bradley/Dempsey sized one, $5 million or more. Add in the fact that he’s under contract so Sunderland would need some kind of transfer fee, especially as they paid roughly $10m for him and the money involved is absolutely preposterous.  Even given that the cap hit’s the same for a $1m or $5m player, I just can’t bring myself to take that seriously and suggest that yeah, let’s just go ahead and do it anyway.

I’m not against the idea of him signing, I could even be persuaded that he might be worth a DP spot (especially if the CBA brings an extra one, or we do lose Gilberto as well as Defoe as rumoured way back when) but if he signed for that amount, I’d fully back the entire TFC squad, nay the entire league throwing a hissy fit like De Rosario when De Guzman and then Mista came along. It’d be madness and when combined with his americanness would give him only the tiniest of goodwill cushions from supporters should he struggle to start the season.

As ever, it’s silly season, and the first week or so is often more about posturing and public negotiating, wild rumours and ridiculous transfer fees and wage demands rather than any concrete action. This one’s definitely worth watching though and at the right price would not be a bad idea at all. At $5m a year though, surely to god they could do better than this.