Posted By Duncan Fletcher on Jan 11, 2015 in News, Uncategorized | 5 comments 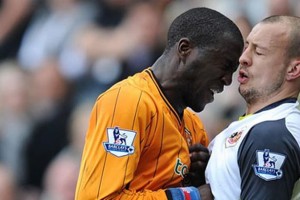 Bradley Orr approves of this.

With the silly season underway the rumours are piling up, but over the last couple of days a lot of reports have come out that suggest the Jozy Altidore acquisition is very much going to happen, that it will be a DP contract, and those reports of a salary of $5-6m weren’t the absolute joke that you probably think.

Beyond the initial reports that we already covered here, a couple of new articles were added over the weekend. First up Canadian Press’s Neil Davidson with a few bits of info. He again confirms Altidore is a target, but also suggested that TFC are looking to get a striker and cash in exchange for Jermain Defoe rather than just straight up selling him, with Sunderland and Altidore seemingly fitting the bill.  That cash would then apparently be put towards a number 10 who’d arrive in July, so presumably currently plying his trade in Europe. Also, they apparently want to get this deal done before the 17th when players are scheduled to return to Toronto, which makes a lot of sense to be able to avoid the drama and necessary half truths and mistruths that would accompany his visit.

All that probably rests on TFC being able to get the sort of value they want for Defoe, $10 or 11m seems to be roughly the amount that gets talked about when they’re bullishly trying to sell their chances.  I’d be surprised if that does happen, after all while Tim Bezbatchenko’s reputation and past career suggests he’s good at manipulating things within MLS, going against various English teams in negotiations is a whole different ball game, especially given it’s no secret that Defoe wants out and TFC now wants to sell him.  The Daily Mirror put out a report saying the asking price was being dropped to $5-6m, obviously take that with a pinch of salt, I’d suggest the truth as with most negotiations is, and the end product will be, somewhere in the middle of those figures.  If that was a borderline plausible report, then this following tweet takes things to the ridiculous.

Good luck with that Sunderland. If I had to guess how this will end up, it’d be as a straight swap, which would be difficult to spin as ‘getting full value for Defoe’. Either way, let’s hope that January 17th deadline holds up and this doesn’t get dragged all the way to the end of January.

One last note from that story, just check out this sentence.

Star midfielder Michael Bradley, like Defoe a designated player, is being kept up to date on all the moves and is involved in the decision-making.

Involved in the decision making? OK then. There’d been talk of him having a lot of influence, good to see it get out there on the record. I’m not particularly keen on the idea that Bradley’s having this much influence, and it seems a fairly obvious connection to make that he’d have been pushing for his US teammate.

Moving on, and of course this being MLS, it’s not as simple as ‘Toronto want, Toronto get’, as reported earlier, Portland were also interested, and thus we get another round of ‘what are the rules this time’? Is Altidore a’DP of a certain (of course undefined) threshold? Obviously a straight up bidding war would be out of the question, so would we get a blind draw or some kind of lottery?

Well, according to this report from ESPN’s Jeff Carlisle, MLS has decided to favour Toronto and now it’s just a case of coming up with a rule and justification. So what are we getting? Well happily there was an already established and published rule that would give them just the result they were looking for, the ‘allocation ranking’. Used when American stars or former MLS players return from overseas, the ranking is based on last years finish, so TFC were 7th, Portland were 9th and thus TFC will get their man.  This will of course somehow be held up as MLS being more transparent and less MLSesque, an amusing concept made more amusing by the fact that Portland were the team that missed out when MLS first abandoned the allocation ranking when Clint Dempsey came back. Hey Portland, you want big players? Build yourself a whole bunch more empty seats to try and fill, and maybe then you’ll get some consideration.

So, it seems like the only thing left to settle is the transfer fee, whether cash or some kind of swap deal (and I do love the idea of Defoe being sent to Sunderland, at least it’d be easier for him to get to London at every possible opportunity) and then Altidore will be ours.

He’ll clearly have a point to prove, a career to rescue after a disappointing couple of seasons in Sunderland, and I do think he’ll do fairly well here, I could see 15-20 goals in a full season and he should bring more to the overall team game than a pure goalscorer like Defoe did. It’s not a certainty by any means, but especially given he’s only 25, I think this has the potential to be a very good deal.

But then of course there’s those wage demands, $5-6m a year? Really? For Altidore? I just can’t wrap my head around that. There is of course the argument that beyond the basic cap hit for the DP player, the price doesn’t matter, 6m is the same as 2m, it’s MLSE’s money not yours, etc etc. I found it interesting that that theory seemed to be most popular among reporters, ie those that (in a way) make their money from the team, rather than those that actually have to pay for tickets, merchandise, food and beer and all that.  MLSE are in this to make money, so yes, the more money they put into this, the more money they’ll have to take out of it to get their profit. And that means from us. Tim Leiweke was eager and unabashed about his desire to raise ticket prices once a modicum of success is achieved. Yes, this is money they’d already budgeted for Defoe’s wages so they won’t be spending more all together, but continuing to splash that cash just solidifies that raise. If the success never comes, if this move doesn’t work out, which I think is a possibility given that this is TFC we’re talking about, then who believes MLSE will continue to splash out the big bucks in this way if they never get results?  Not me, so yes, the wages do matter in many ways, beyond just the basic feeling of ‘surely they can get better than this with that amount of money’.

Anyway, it seems like this is happening, it will be interesting to see what other pieces end up coming in and going out around him and what the team looks like at the start of the season, or when players can be added in mid season. For example what happens to Gilberto? If he goes as well as Defoe, then yes, using a DP spot on a striker is a good idea, if he’s still around, will he play with Altidore, or perhaps behind him? And what about when this targeted DP number 10 comes along, what then? A lot of that might come down to what the new CBA ends up looking like, what changes there might be to the overall cap, the number of DP’s or the cap hit for those DP’s.

Basically, it’s difficult to really commit to how I feel about this. Overall, I think it could work, though it’d be a bit underwhelming if they are spending $5m a year or more and this is the best they can come up with.