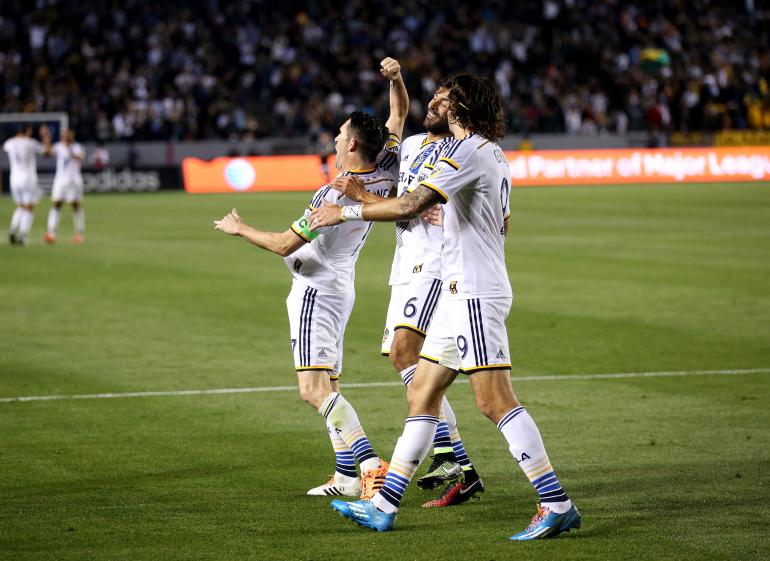 Can’t be bothered to read all this, with all it’s words and links and stuff? Not to worry, this was written to be part of the podcast so you can listen to it instead, with the added benefit of 3 others interrupting, digressing and taking it in all sorts of weird directions! With roughly an hours worth of TFC insight and vaguely TFC related malarkey all around it! Sounds like fun, right? Then go check out the Vocal Minority Podcast. Or do both, I mean, you’ve already made it through this paragraph, why not keep going?

Yes it’s back, the big winners this week were the fans, able to watch games, with players and owners once again living together in perfect harmony for our viewing entertainment.

There were 10 games spread over the weekend starting with LA against Chicago, the reigning champs picking up where they left off and comfortably beating Chicago 2-0. Robbie Keane gave us a strong contender for celebration of the season and quote of the week, as he gave two emphatic fuck off’s combined with the classic ‘up yours’ arm gesture in what appeared to be the general direction of the crowd. Lovely to see Keane already at mid season levels of grumpiness and frustration.

The grand event of the week was Orlando City versus New York City, both clubs making their MLS debut in front of 62,000 people at the Citrus bowl. Lot of excitement and anticipation in the air, what’s the best way to build that up to fever pitch before kick off? Have a Bleeding Gums Murphy style destruction of the national anthem, that’s what. After that, well it wasn’t a great game by any means, this was very much two expansion teams, though the game did get one very nice goal from Mix Diskerud.  That almost won it for New York until in injury time Kaka stepped up to a free kick about 20 yards out and hit a magnificent shot to tie it up, all hail Kaka, hype justified. Of course there was a giant deflection, this really should be an own goal, but there’s zero chance of the league stepping up to quash the Kaka as hero story. The most notable thing about the game was just how strongly Orlando are chasing the ‘club everyone hates’ mantle. 3 players booked for diving, and Aurelien Collin sent off for a very Aurelien Collin-esque tackle, some magnificent villainy all round really.  There was also New York goalie Josh Saunders’ head injury, after being fouled while collecting a high ball his head hit the post very loudly. Concussion? Who cares? Not Jason Kreis, who said: “You’re not going to take a goalkeeper out of a match like that unless he’s begging to come out.” Not the most enlightened view.

Surprisingly Saunders giant bleeding head bump wasn’t the most gruesome injury of the week, that instead went to Justin Mapp’s dislocated elbow, the most notable moment of DC’s 1-0 victory over Montreal.

The biggest matchup, potential MLS Cup preview, saw Seattle take on the New England Revolution, and this was no contest,  Seattle tearing New England a new one, a 3-0 win with Clint Dempsey and Obafemi Martins combining very nicely.

2 teams that have had long spells of success with a very specific and recognisable style and who might well be on the way down tried different things with varying success. Real Salt Lake have switched their diamond midfield to a 4-3-3, and it didn’t go great as they were very reliant on Nick Rimando to get a 0-0 tie against Portland, leaving a frustrated Caleb Porter saying “We outplayed that team. They know it. We know it. Everyone knows it. They got a point, so it’s a draw, and a good result for them. … But honestly, I thought our guys threw everything at them.”

4-3-3 you say? Sounds like Sporting Kansas City. Well not any more as they changed to a 4-5-1 and then a 4-4-2 against New Jersey. The Sporks did well and created a lot of chances but could only get a 1-1 tie. Dom Dwyer missed plenty of chances, later going to twitter to say ‘my wife could have finished that‘ self deprecation which seems quite charming, until you remember he’s talking about Sydney bloody Leroux.

There’s not a lot to say really about Philadelphia’s 0-0 tie with Colorado, but of note the Rapids signed James Riley who’s now with his 7th MLS club, which is apparently a record, causing Dominic Oduro to sigh, pack up his things in Montreal and plan his next move, and Nathan Sturgis to weep salty tears of self hatred for his move back to Houston which didn’t help his total of clubs at all.

That’s about it really, the early season meaning there’s little in the way of pressure or storylines to create much drama or good quotes to complement the action. Ah well, good to have you back MLS.