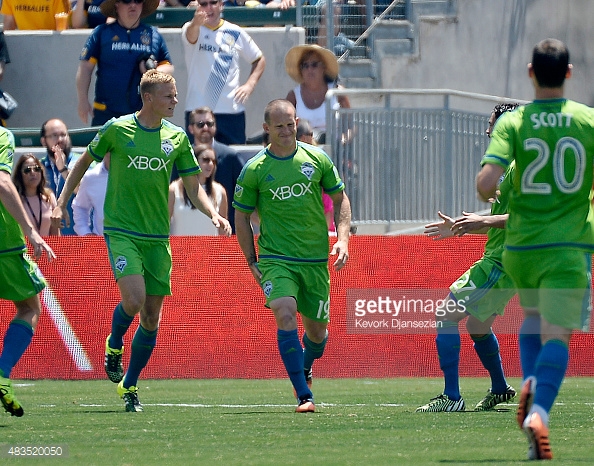 As always, catch the audio version of all this in the Vocal Minority Podcast, coming out later this week.

Giovanni Dos Santos is here and he’s playing and ai ai ai and sit down everyone, Chad’s scored already. Yes Chad Barrett opened the scoring within the first minute of what would generally be a big glamour match up between Seattle and LA. Unfortunately he then turned to run back to the halfway line and pulled his hamstring and thus had to be subbed off. On a per minute basis, clearly MLS player of the week, well done Chad, but it was all downhill from there for the beleaguered Sounders, losing 3-1, the third being scored by Dos Santos. Galaxy continue crushing everyone at home, and the Sounders just continue to lose, that’s 8 out of 9 now, losing pace with the top 5 and now very much fighting for 6th, only 1 point ahead of Houston in 7th. The coaches brought the sarcasm afterwards, When questioned why he decided to play Dos Santos in an attacking position, Bruce Arena deadpanned: “He is an attacking player; he has to play somewhere that gets him close to goal.  I’ve discovered if you put an attacking player in a forward position it is probably a good choice.” Meanwhile Sigi Schmid had this to say on Chad’s injury. “Our luck continues to go good, we score a goal early on and we lose a guy with a hamstring pull. When it rains it pours and it continues to do that.”

The other big game on Sunday was the 3rd and final instalment of the New York rivalry derby soccerwarz, this time with hooliganism as there was talk of arrests beforehand and a rumble outside of a Newark pub pre game caught on camera. Apparently NYCFC Ultras had gone into Bellos, the home gastropub of the Garden State Ultras, sized up the crowd and though they’d have a go, but didn’t notice there was a 2nd floor, where most of the garden state ultras were. A one sided kerfuffle ensued, supporters using whatever weapons they could get their hands on, including a big advertising sandwich board, and full trash bags, before the NYCFC ultras were chased off, cries of ‘who are ya’ following them. Proper naughty.  The game started with a ‘retirement home’ themed tifo aimed at Pirlo and Lampard and both those two looked crap again, Pirlo again showing that a luxury player is not a good idea if you don’t have a very good team around him, and Lampard missing 2 very good chances in the first half. David Villa ripped Felipe’s shorts almost completely off, leaving him a very exposed walk back to the bench for a spare pair. Bradley Wright Phillips scored the first, and Felipe got his revenge with the 2nd goal, after Mike Grella nutmegged Frank Lampard, who was immediately subbed off after the goal. Very satisfying. At the end the Red Bulls fans unveiled another banner saying ‘3 games 9 points #NYisRed’.

City losing was merely one of many good bits of news for TFC in the race for 6th, another came in Montreal. After getting a tie in midweek the Impact played DC United, outshot them 25-1, and lost 1-0, Chris Rolfe with the winner off a horrible defensive mixup by the Impact. DC created nothing, but they didn’t have to.  That’s apparently the first time ever in MLS a team has won after attempting only one shot, meanwhile it’s the second time in a month the Impact have taken 25 shots and lost. Fun. Or frustrating, which seemed to be the word thrown around most often by Frank Klopas and co post game. Davy Arnaud summed it up nicely when confronted with the 25-1 stat. “Really? Yeah, it was three points to zero, too.”

How about Orlando, now with Kaka back in the lineup and playing Philly? They could only get a 0-0 tie. Union boss Jim Curtin gave a glimpse of his stellar motivational speeches: “We talked about everyone having a good game; no one needed to be great.” Yep, no need to try too hard out there fellas.

Add in Chicago, with one eye on the upcoming Open Cup semifinals , losing 1-0 in Portland, on a goal by Fanendo Adi, and the Revs not playing and TFC barely slipped in the standings at all, merely dropping further behind those above them.

Columbus were the only team below them to win, moving ahead of TFC and into 3rd coming from 1-0 down to win 2-1 in Colorado, Kei Kamara with two goals to move back ahead of Giovinco in the golden boot race.

Of the teams trying to chase down Seattle for the 6th spot in the West, It was business as usual for Quincy Amarikwa, who scored, and once again business as usual for San Jose, losing 2-1 to Houston. They’re now winless in 6, but not to worry, Dominic Kinnear knows what’s needed to turn things around: “The obvious answer is, ‘Win,’”   As for Houston, with a lovely goal from DaMarcus Beazley setting them on their way, they’re now in 7th, ahead of Real Salt Lake who went to Vancouver, and also concerned about the Open Cup this week, rested the likes of Rimando, Beckerman, Morales and Plata and thus got hammered 4-0 and had Abdoulie Mansally and coach Jeff Cassar sent off, the latter mainly upset with a penalty decision that led to the first goal. Not that Whitecaps fans got to watch that as the game was joined very late after a CFL game.  The win was Vancouver’s 13th of the season, tying a club record, they continue at the top of the West.

Earlier action saw LA and RSL get wins to start their CCL campaigns while Vancouver and Seattle drew 1-1. As far as signings go, another busy week. There was Maynor Figueroa to the Rapids, and Jack Mack and Ernie to the Crew amongst others. The Sounders really went for it though, picking up Austrian international Andreas Ivanschitz, sparking a lame shit joke from Portland’s twitter account that somehow spiralled into an actual controversy, they also got Paraguayan forward Nelson Valdez, and look to be getting Panamanian Roman Torres as well, though that’s not official at the time of recording. Quite the impressive panic moves from Seattle.