Home » Analysis & Opinion » So Long Gil – This Is Your Time To Shine! TFC Loan Gilberto to Vasco da Gama

So Long Gil – This Is Your Time To Shine! TFC Loan Gilberto to Vasco da Gama 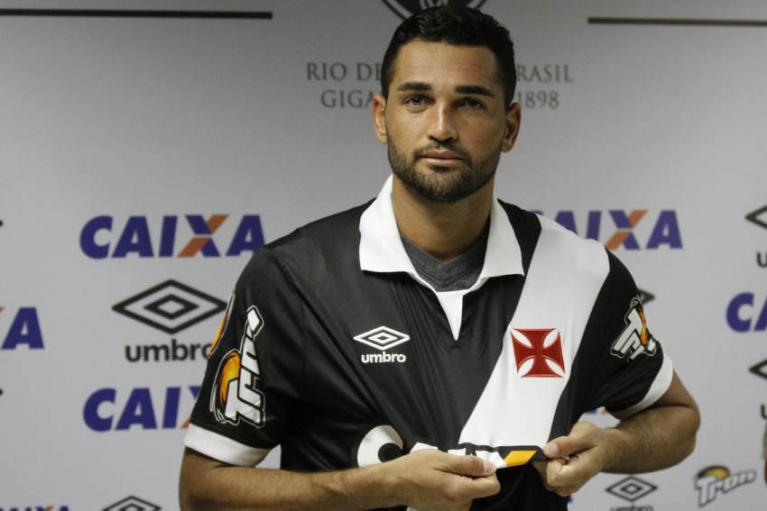 To paraphrase the Just For Laughs guy: ‘Mommy! It’s Over!’, so ends the all too short time of Gilberto here at Toronto FC.  Sigh.

Ol Gil we called him – not because he was poor, not because we didn’t like him; no that sobriquet came from our Simpsons corrupted collective minds as a nod to a lovable character that was always just one step away from greatness.  It fit not only because it was an easy way to shorten Gilberto’s name; but because you could see the effort each and every game; you winced every time he had a near miss (or a howler); but you wanted him to make it, to finally get his time to shine.

But after weeks of speculation, news reports, Gil tweeting pics of himself in Vasco kits and well of course the big press conference from yesterday announcing his loan, we can call it confirmed. He looks so happy, doesn’t he? Double sigh.  He’s going to be with Vasco this year with them picking up all of his wages and taking him completely off of TFC’s hands.  While not 100% confirmed it seems that there’s an option to buy Gil at the end of the season in the agreement as well.   This is likely the best for Gil in the end – he’s home and seemingly enjoying his time training with Vasco.  And from the translation of the press conference it seems as though he wasn’t that happy with Toronto – at least not at the end – triple sigh.  Speaking of Toronto, they finally (almost grudgingly) confirmed Gilberto’s loan today.  Glad that they didn’t go overboard on that press release….

Gil’s year with TFC was admittedly an odd one – he was the unknown signing that got shoved in the corner when the likes of Jermain Defoe and Michael Bradley arrived.  He outrageously predicted the number of goals he’d score at 25 – of course we all laughed but honestly, it’s refreshing to see a player with a little bravado – isn’t that what you want in a striker?  And he was coming off a fairly successful season at Portuguesa with 14 goals in 24 games.  However beyond that bit of boastfulness Gilberto always seemed like a happy go lucky kind of guy – just wanted to play and score goals.  We all know that the goals didn’t come easy in the beginning, making it easy to dismiss him as a washout before the season was even half over.

On one hand it was understandable; here was a DP striker that was missing what felt like chance after chance after chance – and to be fair he missed what looked like some real sitters – but honestly we’re an unreasonable bunch at times are MLS fans.  The expectations on new players; especially ones that come to our beleaguered play-off starved club, are really high – every new signing is expected to make an instant impact and well, for players coming outside of the North American soccer system that rarely happens.

Take a look at Clint Dempsey – who I dislike intensely – when he came back to MLS it took him pretty much the entire season to score one goal, finally netting one in the last game of the season.  This is a player that had spent time in MLS before heading off to England, was familiar with the game here and was playing for a pretty decent Seattle Sounders team and it still took him 9 games to get his first goal (it took Gil 10 games).  Dempsey of course had a pretty successful season last year and is now considered one of the stars of the league – but he got a full season plus to get his scoring boots set and went for long stretches with no goals.

What was noticeable about Gilberto were the things he did off the ball: always on the move, making runs, distracting the defense – hell he tracked back and played defense! – and boy did he try. You couldn’t fault his compete level or his effort.  Seriously, you had to feel for him as he found new ways every week to not score; our merry crew sang songs for him – OK it was usually just Mark and I but still, there was singing – people grew beards until he scored; we just wanted him to succeed!

And when he finally scored his first goal – you remember the one.  No?  One of the top goals in TFC history?  Let me refresh your memory:

I have watched this more times than I should probably admit.  But the look on his face to the guys after he scores?  So great.  And the goal itself?  Gorgeous.  One of the best goals that I’ve seen.   While this amazing goal didn’t start him on an immediate streak, it did at least take some of the pressure off.  Having already notched a couple of assists before his stunner, he would finish his time in Toronto with 5 assists and 7 goals overall.

Not great numbers, but not the worst that’s ever been witnessed at Toronto FC.   Injuries also played their part on Gil’s game as he suffered through a hip flexor injury through the early parts of the season – hell he missed the first game because he was hurt and it would affect his game throughout the season.  In fact the game he scored the goal in was in the midst of a weeks long period in which in barely played due to that injury. In fact he didn’t play the next two games after the New York game and barely in the few that followed after that.  You have to wonder what a fully fit Gilberto might have been like; or if he’d been able to play riding that wave of confidence.  But we can’t – hindsight and all that.

How things were handled after the season ended makes me less than happy.  After the season ended you could already get the sense that even with the inevitable departure of Defoe that Gilberto wasn’t in the plans for Bez and Vanney going forward.  Once the rumblings about other DPs and potential signings got louder and eventually manifested into Sebastian Giovinco and Josy Altidore the writing was on the wall.  Oh sure the club mouthed lots of platitudes about him still being a member of the team and that they were exploring all of their options; and I’m sure that to a certain degree they were.  However when it became obvious that Gil was in Brazil to stay what we got was deafening silence and a day late press release when all was settled and done.  For those thinking that Gil will come back after the loan?  It’s not happening –  even if a fourth DP spot was magically made available, Gilberto would still be playing in Brazil this year – and next year and so on.

It’s not the end that I would have liked, I really wanted to see Gilberto get a chance to show what he could do with a second year in MLS.  With a proper off season to rest, heal and train.  The things you want for any player but I truly believe that he would have been a force in this league.  So Laba last year and Gilberto this – for my sake and yours I hope that this is the last time we have to watch the TFC braintrust barely give a chance to a South American import before something else catches their eye.

I’ll miss you Gil – you were almost always the player that I enjoyed watching the most and the one that I followed whenever you were on the pitch.  Not sure that I’ll be able to get any Vasco games in but I’ll do my best to try.  Go on Gil; this really is your time to shine.