Home » Match Previews & Reports » WWC 2015. Group A and B review and preview. Canada wins, just, and the Elephant graveyard.

WWC 2015. Group A and B review and preview. Canada wins, just, and the Elephant graveyard. 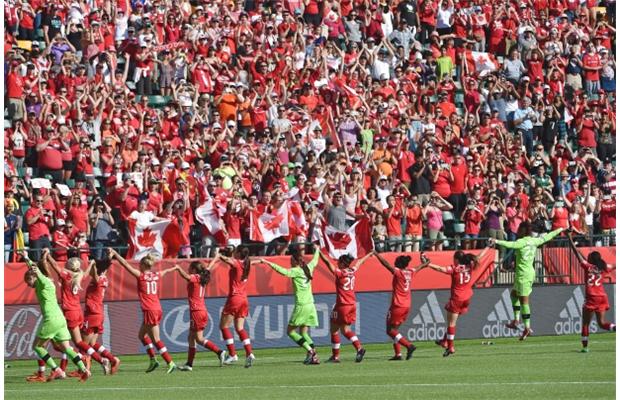 4 days down, everyone’s played once, time for a brief look at what’s happened so far before we get into the second round of games. I’ll do this group by group as the games come along over the next few days.

Opening ceremonies. A bit dull really weren’t they? These things are often so earnest and sincere that they’re easy to laugh at, and overly earnest and sincere is very much what Sarah McLachlan does at the best of times, so I had high hopes of unintended comedy, but though there was the expected ‘cute kid’ quotient and way too much awkward high fiving and bad lip sync action, there was very little noteworthy bad or good about this one. I guess well played to the organisers, but still, booooo.

A good record breaking opening day crowd in Edmonton, and first up it was Canada v China. Not the greatest performance from The Flying Moose (someone’s clearly having fun with wikipedia, but what the hell, I’m good to go with that nickname) really, mainly confirming my pre tournament impression that they’re going to struggle to score goals and there won’t be much attacking fluency and they still haven’t figured out how to get the best out of Christine Sinclair. They got the result though which is all that counts, though I’m not convinced that that penalty went exactly to Sinclair’s plan. Going in off the post is too close to going wrong for comfort and I can’t believe she intended to hit it so softly it bounced before it got to the goal line. It looked like a scuffed shot to me, and the goalie came very close to stopping it. But she didn’t so it’s all good and we move on.

Canada remind me of the England Men’s team over say the last 15 years or so. They had a fairly basic style that worked for them to a certain extent but was never going to go beyond that certain extent so they’re trying to get a bit more sophisticated, to something that will eventually lead to them looking better when they get it down, a process I’d say started under Carolina Morace. It just doesn’t seem to come naturally to them and the 2011 World Cup was an obvious implosion, John Herdman’s come in and tried to keep that going and refine things and find a way of continuing in that direction while still using the team’s existing strengths, but it’s very rarely come together, London Olympics aside and 4 years in, doesn’t really look like doing so yet. Not surprising really, as England have found out, that’s not something that can be changed quickly, players brought up playing the old way, even those who came through youth teams playing that way aren’t really going to be the ones who really benefit from it, it’s the next generation growing up with those ideas and influences that will hopefully make that leap forward. Unfortunately Canada’s not in that position yet.  They don’t look terrible by any means, and I think they’ll win their group and do ok without ever convincing before eventually getting knocked out by the first really good team they face. If the draw works out for them, that might not be until the semi finals, which could definitely be seen as a good result.

Anyway, their 2nd game is against New Zealand on Thursday and it’s one that Canada really should win. They’re a better team than the Ferns and should be able to handle things defensively. On the other side of things, after losing their first game New Zealand really need a result here so can’t just sit back and make it difficult for Canada to break them down, that should lead to plenty of opportunities for Les Rouges to capitalise on. It’d be nice to see a convincing win, something a bit more entertaining, but much like the last game, 3 points is really all that matters, I’d take another uninspiring 1-0 win any day of the week, and I think that’s probably what we’ll get.

Before that, there’s what may be the most intriguing matchup of the group, China vs the Netherlands. Much like New Zealand, China need a win here so it should be a fairly open game. I didn’t see the Netherlands’ first game, but have read enough people seeming impressed by them to think that they should have enough to get at least a tie here and set up a winner takes the group game against Canada in Montreal.

Group B (the elephant graveyard)

Someone call the SPCA as the first games in this group saw a bunch of elephants get slaughtered. Thailand (the War Elephants) held on for a while against Norway before eventually succumbing to a 4-0 defeat. Embarrassing?  Not for long, as Germany then came out and crushed Cote d’Ivoire (just regular elephants, no warlike tendencies here) 10-0, and that’s despite a very good performance by the Ivorian goalie. Cue the hand wringing about the expansion to 24 teams diluting the quality, a valid point, but it happens in any sport with either gender at some point, and these teams aren’t going to close the gap by staying at home are they?

The second games are where this group should be interesting. Thursday sees Germany take on Norway, which will be vastly more competitive, but still should be an easy win for Germany and to be frank a minor blowout, 3 or 4 to 0 kind of level, wouldn’t surprise me at all. After that, it’s Thailand vs Cote d’Ivoire, elephant vs elephant and while it won’t be the highest quality football, it could well be entertaining as a win here would mean 3 points which might well enable that team to get through to the next round even with a terrible goal difference depending on what happens in other groups. So expect both teams to go for it and there should hopefully be some goals in this one, with Thailand probably coming out on top. here’s an early preview

Then next week expect them both to get hammered again in their 3rd matches when the Europeans with big guns turn up again.

It all kicks off today at 4 eastern, starting with Germany vs Norway from Ottawa, then over to Edmonton for China vs the Netherlands. That overlaps with the Thailand/Cote d’Ivoire game starting at 7, then Canada vs New New Zealand at 9. It’ll be a long day, let’s hope it’s a fun one.