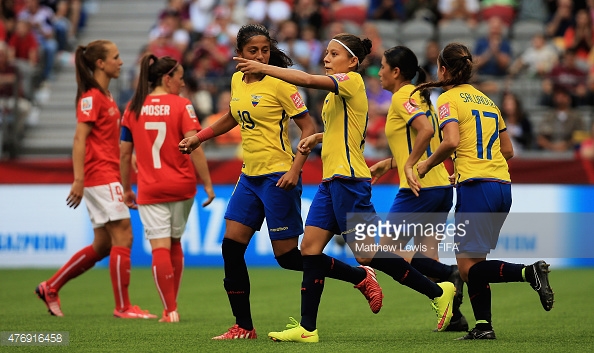 Angie Ponce. Goalscorer. that’s what you should remember her for.

Friday started off with Australia vs Nigeria. The Aussies opened the scoring with a very well taken goal from Simon after de Vanna had a long run before passing it off. It should have been offside if the Nigerians were in any way able to maintain a disciplined defensive line, but still, they did well to take advantage of that. Their second goal was even more hapless defending wise, some of them moved up, some of them didn’t and two Matildas were completely alone against the goalie on the edge of the 6 yard box. One of them scored. The game was over, Nigeria had been disappointing, there was 4 minutes of stoppage time to be played, and the ref blew the whistle after 75 seconds of it. A very odd finish.

Then it was to Vancouver for Switzerland vs Ecuador and this one was all kinds of remarkable. it finished 10-1, which is alarming enough, 2 different players scored hat-tricks, two hat tricks, don’t say that quickly, including the fastest ever in WWC history (5 minutes, by Fabienne Humm), and Angie Ponce scored two own goals, the first person ever to do that in a World Cup. happily, Ecuador got a penalty and Ponce took it and scored, which will more than likely be their only goal here so that’s something. That followed a 6-0 defeat to Cameroon in their first game. Next up they play Japan. Be afraid, be very afraid. Hopefully the Japanese see this is an opportunity to rest some players, rather than an opportunity to get some goals on the board after a couple of low scoring games for them.

Back to Winnipeg and the US v Sweden, and the pre game talk was about Abby Wambach finally being dropped. It didn’t really help as the US  were again unconvincing. Wambach came on but couldn’t score and it ended 0-0. Not a terrible result by any means, Sweden are a good team, but the not the throat stepping that some were calling for.

So that leaves everything still up for grabs in the group of death, currently USA with 4 points, Australia with 3, Sweden with 2 and Nigeria with 1. More than likely Nigeria will lose to the states, especially if they play as they did against Australia, so probably that’ll leave them bottom and USA in first place. Australia vs Sweden should be interesting, you’d expect the Swedes to win to get 2nd, but it should be close enough that the Aussies 3 points and ok-ish goal difference should be enough to get one of the 4 top 3 places and advance as well, you’d hope so, they’ve deserved it.

Finally it was Japan vs Cameroon in Vancouver, the Japanese going out to a 2-0 lead before Cameroon got one late and came very close to getting a second, a better result than anyone would have guessed I think. Japan have 6 points and a gimme against Ecuador to finish off, but it’s only two narrow wins so far, perhaps not as impressive as you’d expect. The battle for second should be well worth watching on Tuesday, both the Swiss and the Cameroonians lost narrowly to Japan and hammered Ecuador so look to be well matched. The Swiss did have the advantage of playing Ecuador second and knowing they’d need a lot of goals there, so have the edge in goal difference so a tie would do them very nicely. Cameroon need a win to grab the 2nd place, though ending on 4 points would surely be enough to get through in 3rd.

On to today, just in time before the cruelly early 1pm start.

Hopefully Moncton has it’s organisational act together a bit more than it did for the first games, or Monctonians now know to show up hours ahead of time if they want to make kick off. There’s some good teams in this group and they and the fans deserve better than what they got on Tuesday.

France looked good against England, yes it was only 1-0 but they fully controlled the game and really shouldn’t have too much of a problem going on to win the group. As for England they were very uninspired, hopefully against weaker teams they’ll show a bit more attacking intent and imagination enough to do something with it. I’m confident they’ll be able to, but much like Canada, they look like they’ll slog their way through, then lose to the first decent team they face.  The other game was quite an impressive one, Mexico and Colombia, Colombia scored a fantastic goal and really gave the higher rated Mexicans problems. Going by the evidence of those games, it wouldn’t surprise me if England struggles to get past both teams. They probably will though, as will the French and there’s a good chance that the tie will mean both teams get eliminated with only 1 point not enough to be one of the top 4 3rd place finishers, which would be a shame. Today it’s France vs Colombia at 1 Eastern and England vs Mexico  at 4.

Hopefully a weekend will mean more people show up as the 10,000 that rattled around the big O for the first round of games was hugely disappointing. Brazil have the edge here after beating South Korea 2-0 in the first round. Not a great performance by any means, but they got the job done and should easily coast to a first place finish. the other game finished 1-1 between Spain and Costa Rica, two quick goals cancelling each other out before Spain did plenty of good things, aside from that whole scoring thing. Brazil and Spain go first, at 4 eastern, before the more important game, Costa Rica vs South Korea. With 2nd and 3rd place very much still up for grabs here, both teams will be playing for a win, which will hopefully mean entertaining things.