Posted By Duncan Fletcher on Jan 15, 2015 in News, Uncategorized | 2 comments 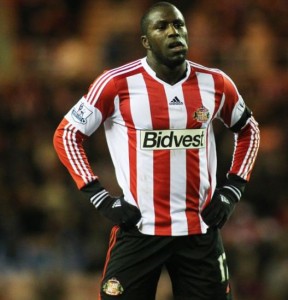 Best January transfer signing ever. Oh, wait, no, they the mean the other side of the deal.

Well, it was quite the day for Toronto’s squad building attempts, at the DP end, and at the probably USL Pro side as well, one could plausibly call it a SuperDay.

First up before all the SuperDraft nonsense (for all the highlights of that, click here.) there was the signing of Jay Chapman. Highly touted young player, who’d have been right up there at the top of the draft, but who was somewhat dubiously granted homegrown status, allowing TFC to bypass that. Whether he can get time with the first team this year or just a lot of time with the USL Pro team is yet to be decided of course, but plenty of people have suggested he’d be capable of jumping in and holding his own in MLS right away, so all in all a very good start to the day 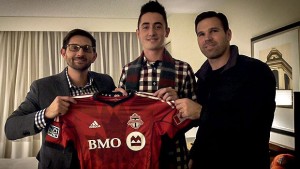 Hey, Tim, this isn’t about you. Maybe let jay hold the shirt, ok?

Next up was the draft itself, and gasps of disgust could be heard from all TFC’s previous management teams as there wasn’t one single trade involved on the day, instead just 5 picks, all used in their pre assigned spots. That’s not the TFC way at all.

First up, 6th overall, thanks to Chivas USA, may they rest in peace, was goalie Alex Bono, rated the top goalie in the draft, recently called up to the USMNT’s traditional January camp strudel, and if you forget about positional needs, one of the best players in the draft. But with positional needs is this really something TFC should be doing. Having a top quality goalie waiting in the wings isn’t a bad thing of course, but I really can’t see him jumping straight into the first team, so does that mean he’ll replace Chris Konopka as backup? Hardly seems the best way for a goalie to develop? This Neil Davidson article suggests instead he’ll be seeing time with the USL Pro team. That would probably be a good thing for Bono’s development, but what about Quillan Roberts, this doesn’t sound like a good thing for his place in the depth chart or his future chances. Patriotism for Canada should have as little to do with TFC’s choices as patriotism for America should, but it’s not great for Roberts, his hurried signing of pro terms now seems like even more of a bad idea. Let’s just hope Bono doesn’t turn out to be a lemon (Huh? Huh? You thought I’d get through this without a terrible U2 pun? please).

After that, TFC finally turned to the really obvious gap in the current roster, the defenders, and with the 9th pick, they chose Clement Simonin, which confused pretty much everyone, before going back to what the mock drafts predicted by picking up Pickering’s Skylar Thomas, another centre back who by all descriptions, looks to be an ideal Doneil Henry replacement. Moving into the second round, and they added another defender in Wes Charpie and finally went off the board again with forward Edwin Rivas 39th overall.  I shan’t pretend to know much about most of these, if you haven’t already done your homework and research, Dave Rowaan’s write ups over at Waking the Red are probably the most in depth reviews of the picks.  Congratulations to all of them, hopefully they do better than we should probably realistically expect, the USL pro option should at least give them a better chance of sticking around for longer than past luminaries such as Kene Eze, Jose Gomez and many many others.

All of that is probably for the USL Pro, maybe for the future of the first team but probably not so what have we got to help out this season? Well, the Jozy Altidore transfer is inching closer to it’s end, despite Red Bulls coach Jesse Marsch apparently thinking they still have a chance Altidore’s in Toronto, he’s had a physical, as has Jermain Defoe over in Sunderland and there’s a major announcement scheduled for 11am tomorrow morning.  He doesn’t get the Defoe, Bradley treatment, instead getting introduced Gilberto style at the ACC, presumably with ACC employees brought in to swell the crowd and provide the applause as is tradition now.

We obviously won’t get exact salary details  until the Union releases things (or maybe we will, if they want to hype up just what a major signing this is.) but hopefully, whether from our end or Sunderland’s end, full disclosure of the transfer fee will come out. The Daily Telegraph over in England have also reported that no cash swapped hands here, (they say ‘best January transfer signing ever!’ what does that mean for the people on the other end of the deal?) that it was just a straight swap, whereas the narrative over here seems to be a deal that’s worth about $10-$11m overall. How exactly these things get reconciled, how much of that is TFC/MLS’ valuation of Altidore and how much is actual cash will be a very fun fact to find out.

If MLS has learnt anything from the Frank Lampard fiasco (spoiler: of course they haven’t), they’ll just tell us what the deal was, and what the wages are rather than let those details be leaked out later on. Some people won’t mind, some people will be impressed by the high price tag, sure some people will be outraged and full of mockery (hello!), but best to get that out there now so that by the time preseason and then the regular season roll around it can be just about the football and what he brings to the team on the pitch, which I do agree should be quite good.  Anyway, tune in tomorrow at 11am, these things are usually good for some preposterous tone deaf hype amid the cliches and platitudes.