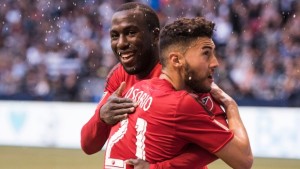 I’m so awesome, I can make it rain beer.

2 goals from the debutant star striker and 3 points in the bag. The obvious comparisons to last year are obvious (and for anyone looking for a lazy ‘yeah, but’ can continue all year really, 9 points from the first 4 games, yeah 2014!, 19 points from 11? 2014, 3rd place and comfortably in a play off spot at the end of August? 2014), but it’s best not to do that really, different team and situation and all that, more importantly, there was eventually a different feel to the game.  As Kurt Larson was desperate to remind us when things were looking rough in the first half, it’s early, so much as in pre season, best not to get too ahead of ourselves. Though drawing conclusions would be silly at this stage, there are definitely observations to be made.

One of the big things I was going to be looking at for this game was Jozy Altidore. Obviously there was plenty of doubt as to how effective he might be given his problems with Sunderland, and pre season didn’t exactly reassure in that regard. Get off to a poor start and negativity could have easily snowballed among fans and once that gets going it can be tough to turn around. Well no worries there as that was a great start by the simple metric of goals and that will help take a lot of the pressure off him and make things a lot easier. Now obviously you can look at different stats, and see 2 shots (1 from a penalty), convert that to a regular conversion rate and it won’t equal many goals at all on a regular basis, so it’s not really the goals that leave a good impression, more they way he took those goals, and how he looked out there.

The first goal was a very nice bit of skill and more importantly composure, as he really didn’t have a lot of time and space to get round Ousted and still have a decent angle to score from, but did it very very well indeed. As the game went on, he became more involved as TFC got the game under control, causing problems for the defence, winning fouls to help slow the pace of the game which suited TFC just fine, and did very well to win the late penalty. The way he took it though. A Panenka. Followed up by the trolling celebration in front of the Vancouver fans. Cool, ballsy, confident, more than a little obnoxious. The whole thing just reeked of swagger.

Sunderland blog Roker Report tweeted about it, getting many replies along the lines of he couldn’t hit a barn door with us, or he would have hit it over with us, and there’s definite truth to that. Obviously he’d become a bit of a joke by the end of his time at Sunderland, and never really seemed all that comfortable or confident, understandably enough. But here, he looked very much at home, the big man on campus again.

Probably every sport has this term in one way or another, but I’ve always enjoyed cricket’s version of it: The flat track bully.  Meaning a batsman who, when the conditions are in his favour, ie a flat, lifeless wicket, or ‘track’ offering nothing to help the bowlers, will smash the ball everywhere, get a lot of runs, and look like a fantastic player. When the conditions are in the bowlers favour though, if the wicket is cracked or wet or has more grass than usual and the ball is moving and runs are hard to come by, he’ll get out cheaply and rarely produce at the level of other steadier, more determined players who may not shine as much on the flat track. Anyone who watched English cricket in the 80’s and 90’s as I did is probably thinking Graeme Hick right now, one of the most dominant batsman of his generation at the county level, couldn’t do it for England.

I think that this is Altidore, did alright in MLS, not so great in Spain or England, went to Holland and looked like a great goalscorer, went back to England and again, couldn’t really hack it. Now back in MLS (and yes, it’s just the one game so far) and he looks good again. He can play here, he can score here, and he knows it. He already looks cocky.

Obviously depending on what he wants, this comparison isn’t a good thing for Altidore. If he harbours ambitions of moving back up to a higher level, no matter what he does here it probably won’t impress those who’ve seen how he floundered in England. If however he’s happy to stay in MLS, earn a big paycheque, live closish to home, help grow the game, and have fun as a metaphorical man amongst boys, I doubt he’ll care.  As for TFC and TFC fans, this could very much be a good thing. Who cares if he’s a flat track bully? MLS is a flat track league, and TFC, theoretically at least, should be one of the better teams within that league, it’s an ideal situation for him to fill his boots.

Is he now a better player? No. Was swapping him more or less outright for Jermain Defoe a good deal?Not going by the value of each in the world market, no. Give him a confidence boosting year in MLS would he be able to go back to the Premier League and look like he belongs? Probably not. But he doesn’t have to be those things, he just has to be good enough to do well in MLS. He’d shown before he had the style of game to be able to contribute, and score goals at this level, it was going to come down to his state of mind, whether he could get back the confidence lost in Sunderland, and to an extent whether he can motivate himself to play hard in MLS. It’s obviously way too early to answer the motivation question, let’s see how he’s feeling after a long season, but as far as the confidence part of it goes, this game suggests we don’t need to worry about that at all.