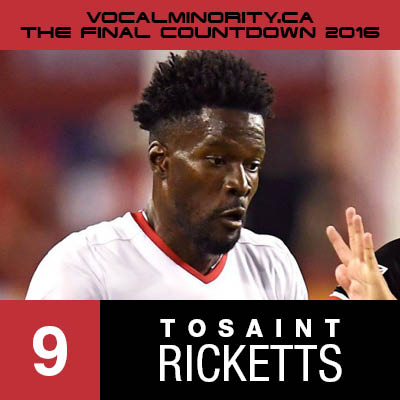 Kristin: 11 – Super sub extraordinaire!  Speed, nightmare for opposition defenses late in games and Canadian!  Plus that goal against Montreal – thrilled that he’s with TFC, looking forward to seeing a full season from him.

The rumours of Tosaint Ricketts coming to Toronto FC were murmured for several months this past year – his time with his latest Turkish club Boluspor had come to an acrimonious end due to unpaid wages.  He was often seen at training with TFC through the spring and early summer – just keeping up his fitness while deciding on his future we were told, though many of us were hopeful that he and the team would come to an agreement on a contract.  One of the sticking points was whether TFC could afford what Ricketts was asking for salary wise, and of course did they really need him?  But as the season wore on and the need for secondary and tertiary scoring was apparent (and surplus defenders on huge contracts were released), it became a case of when instead of if Ricketts would join the Reds.

He was officially signed in late July and made his first appearance just days later on July 23rd against DC United in a 4-1 win.  Throughout the remainder of the season Ricketts would rarely start; Vanney preferring to bring him in off the bench in the second half to inject speed and energy into the attack – although it must be noted that TFC have yet to lose a game in which Ricketts has started….just sayin’!

He has been a very welcome addition to the team with his ability to harass and confound opposition defences with his speed – something that TFC has not often had as an option in their attack.  His height also gives Toronto additional help on set pieces; we’ve all been maddened by watching balls get lobbed near Seba time and again, Ricketts (like Jozy) can at least get to those balls!  He scored three goals in the regular season and two during the playoffs – not too shabby really.  While he doesn’t have the best finishing rate (he and Justin Morrow scored the same number of goals this season), his presence on the pitch has been the difference maker more than once.  Not only did his first goal give Toronto the win (super sub indeed):

He was also one of the goal scorers in that thrilling Eastern Conference Final second leg against Montreal; it wasn’t the winning goal but it put the game out of reach for the Impact – plus Evan Bush crawling after the ball is just delightful.

Tony: 10 – Possibly the buy of the year. Goal vs. Impact made me swear-scream.

Mark: 7 – The best monkey wrench to throw at the opposition from the bench ever, and when he was thrown in, did he cause the backline a headache.  Fantastic acquisition.

Duncan: 9 – Can be a frustratingly poor finisher and doesn’t appear to have a left foot worth speaking about, if we have to rely on him as a starter for any length of time we’ll be in trouble. Having said all that, had a massive impact coming off the bench, bringing that something different that worked very well as a compliment to or replacement for Altidore and/or Giovinco. Forget Tobias time, this year we got Tosaint time, in the entire playoffs, with him on the pitch, at the end of games, losing, winning or tied, TFC scored 8 goals and conceded 0. Him not being the second sub in the final has to be a decision that haunts Greg Vanney still.

Mark HSV: 14 – Ok the top 15 or so is pretty tough to rank and I’m surprised I haven’t been more negative so far. Ricketts is a super-sub and I want it to stay that way. Sure, he could start when other strikers are hurt or away, but his speed late in a game when opposing defenders are tired is massive. Won’t be as big an impact when starting games. Not a great finisher either. But love him as our 3rd striker now.

Duane: 10 – My favourite player TFC has signed in years. Really.

David: 10 – Rounding out the top 10 is Ricketts.  As a super-sub his impact was incredible.  Coming in with 20 minutes or less was simply not fair to opposition sides with his pace.  His strength in the box with the ball and the ability to finish or play off to someone else was wonderful to watch.

Jen: 9 – zzzzzZZZZOOOOOOMMMM he brought the special sauce (basically he fixed the problem of how we start to suck when everyone else gets tired and wants to go home)