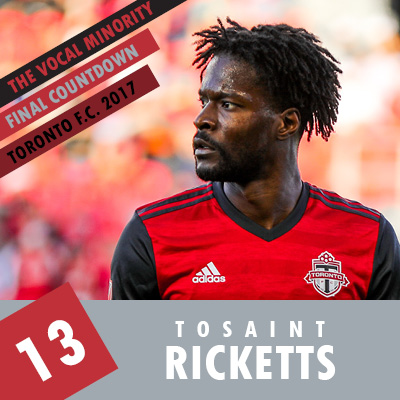 Kristin: 11 – Tosaint Ricketts!  Fucking Wicked!  I’m a big fan of Ricketts and as I wrote last year, was thrilled when he was signed by Toronto FC last year.  His super sub status propelled him into the top 10 of our countdown and there were high hopes for him this year; but he (likely rightfully) falls a few places, but that doesn’t mean he didn’t have a good year with the Reds. He played twice as many games, scored more goals and was instrumental in Toronto FC wins early on in the season, as well as helping to fill the void when Seba & Jozy were out.

Tos has something very different to offer than other TFC strikers, most notably his speed which the team often uses to their advantage – hence his often effective use as a Super Sub, his speed helps to break down opposition defenses in the latter half of games.  He was called upon to start more games this season and while this isn’t always met with a positive reaction (including by myself), he did better than expected especially as the season wore on and he had more opportunities in this regard.  Does starting always show off his skills to their best advantage?  No, and the team isn’t often set up to take advantage of those skills.  But again, he offers a different target and once in close to goal it’s hard to deny him.

Here’s a great example against the Galaxy late in the season, fast and right place right time results in a goal:

Then there’s this winning goal (off of some lovely work from Jozy Altidore) against the cheesemakers – a really nice headed goal:

But likely his best game – and one that gave TFC their first ever five game winning streak was his brace against the Columbus Crew in the space of ten minutes; fantastic stuff:

Ricketts isn’t going to be a regular starter for Toronto FC any time soon (if at all) – but having a player of his quality and ability to bring in off the bench, as well as start on occasion is a very good thing.  I expect we’ll see a lot from him this year.

Duncan: 14 – Same again really for Tos, though without the big playoff goals. Did the backup striker thing well when called upon.

Tony: 14 – Expectations were probably unexpectedly high after 2016’s “super sub” performances.  He is what he is – fast as f*ck but an average finisher.  We like Tosaint but we’ve probably seen his best.

Mark: 13 – Tosaint, being one half of the greatest strike partnership in MLS, is a very capable substitute and love his skill set as a change to the usual strikers. Want more of him but don’t know if I can get more without injury being a part of the equation.

Mel: 11 – Tos adds a great spark off the bench, but he also came up big for us when we needed him to start.

Jeff: 15 – Great back-up for Gio & Jozy.  Brings something completely different as well and pulls backlines apart.  Did pretty much all he was asked to do.

MarkHSV: 15 – Ricketts had a few really great games this year and a few meh ones too. A good 3rd striker, but not really up to par as a starter. Still a valuable member of the team.

WhaleyStatic: 17 – Doesn’t get much of a chance but always great.

James: 16 – To have a player like Ricketts at such a position in this countdown speaks to the luxury that this current rendition of TFC has at its disposal. Stepping in for Altidore, Giovinco, or both, is no easy feat. Tosaint came up big when he was needed.

ZicoZay: 9 – A super-sub who can operate as a single striker.

Mr. Tuktoyaktuk: 19 – Didn’t see him as much as many wanted but should more chances to play in 2018 due to CCL.

Martyn: 9 – Seems like he always scored two!! That Columbus game was more than we deserved.

YellingAtSoccer: 15 – His 90′ performances lacked a bit.

Artur: 12 – Fucking Wicked as someone from Vocal Minority says. I Agree 🙂 The guy can safely compete with H. Bolt.

Ruchesko: 11 – Officially TFC’s answer to Ole Gunnar Solskajer. There are worse things to be.

Alex: 12 – Once again proved to be useful player off the bench and even started in important games .

Steve G.: 11 – A starter on most teams in this league, this was the season that Ricketts showed he could be more than a super sub. he was an impact player who had more questionable disallowed goals in one season than I care to remember! Many will point to his 0 shot performance away at Columbus in the MLS ECF as a statement to how he is not “Jozy or Seba” but anyone who does really doesn’t understand soccer. playing 4-1-4-1 was never about using Ricketts up high to score goals. He is the highest form of luxury for this team. The fact that they can sub him on at 75 minutes with his speed to expose tired CBs is just plain out unfair.

TweetKred: 12 – I can’t justify putting him so high due to the lack of play but I can’t rank him lower because of how key he was when the DP strikers were out. He took his chances and is the undeniable best crab soccer player ever. Best Ricketts we’ve ever had.