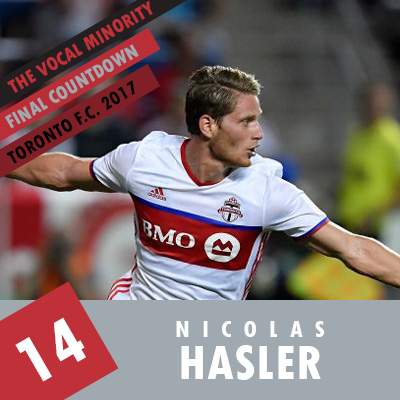 Kristin: 15 – Nicolas Hasler – or as I like to call him, Baron von Liechtenstein – was a summer addition to the team in response to the fact that TFC (deepest team ever), still seemed to have no natural back-up at right back for Steven Beitashour (sorry Alseth).  Hasler had mostly played for his hometown club of FC Vaduz, as well as representing Liechtenstein at the international level – heady stuff, plus it meant that TFC got to fly a new flag at BMO Field!

Hasler wouldn’t start (or even play) in a game for over three weeks after he was signed, something that became more and more frustrating for TFC fans as the weeks wore on, especially as Steven Beitashour was out injured and Oyvind Alseth hadn’t taken over the role.  However when he did finally start playing, what was noticed right away was his penchant for attacking – mirroring Morrow on the other side of the pitch with bombing runs up the flank, the Baron fit the 3-5-2 formation that Vanney preferred for much of last season very nicely.

While still needing to brush up the defensive side of his game, the former midfielder showed a serious nose for goal and tallied three in total during the season.  It’s his second goal that I’ve included for your viewing pleasure – both for the goal itself being a delightful header, but also for the celebration with Vazquez (who he paired well with for many of his games)

With Steven Beitashour moving on to LAFC, is Hasler his replacement?  Hard to say, and a lot of it depends on what formation Vanney goes with next season.  Regardless, a solid debut from the Baron and expect to see a lot from him in the coming year.

Duncan: 16 – A Liechtenstein international! How exotic. Came in and did a decent job, provided a different more attacking option than Beitashour, scored a few goals, all in all a decent squad player.

Mark: 14 – Like his tool set in comparison to Beitashour, added a versatility to the bench. A welcome addition.

Tony: 15 – Liechtenstein Pele was a great low-risk addition in the mid-season. A bit more offensively-minded than Beitashour but lacking a bit of the defensive prowess. Terrific depth and the son of the greatest Liechtenstein footballer ever!

Steve C.: 14 – Great pickup – I expect great things from him next year.

Mr. Tuktoyaktuk: 8 – The summer transfer window is like a box of chocolates. Sometimes you get a Hasler. Not sure where I’m going with this…

Jen: 17 – All these back line guys are pretty good so I’ll just lump them in together.

MarkHSV: 14 – Hasler was a pleasant surprise when he joined mid-season. Showed a willingness to get into the attack, and linked up well with Vasquez. A potential starter next season?

ZicoZay: 12 – His speed, timing and technique will mean he should be knocking on the door to take a starting role this coming year.

TuffyRocks: 12 – Showed some scoring ability. Not sure he’s worth the INTL spot.

James: 17 – One of the more interesting turns in TFC of late is that after footballing ability and financial logistics almost as important a consideration when bringing in players is the personality of the man. Hasler, like Vazquez, Mavinga, Hernandez, and Cooper, to name but a few of the more recent arrivals, are some of the nicest gentlemen one could hope to have represent a club. His midseason acquisition really provided a spark in the midst of a gruelling summer that could have seen the side let their form dip and his versatility allowed Vanney to be more creative in how he lined up and directed his side.

WhaleyStatic: 15 – Maybe a bit high but can’t wait to see a full season with him in the system.

TweetKred: 15 – The Baron! What a great emergency pickup and I hope we keep him. 99 LuftBallons Chipping in goals, great runs but not showing the kind of defence our Beita did made him a perfect complement when we needed attack minded play. But when he got healthy again Beita made himself the first choice.

Alex: 14 – A late season addition , seems like the future wing back for the club, great find by the GM.

Steve. G: 20 – Dont get the Hasler love that most of the mainstream media seems to have for Nico. Is he a telented player, yes. Did he help this team (especially when Beita was injured) yes. But is he a starter? No. Beita is still better and Nico is one of many players this year who can do a job on a very very deep team.

Martyn: 16 – Thank you for the headed goals and exotic flag.