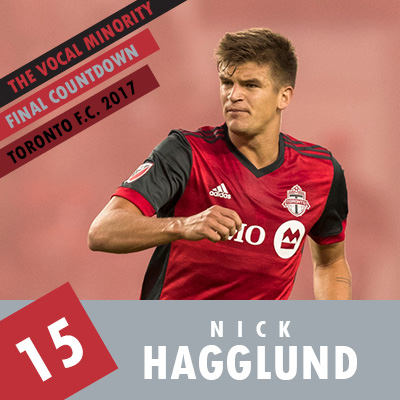 Mark: 15 – Ahh, the Slammin’ Salmon. Everyone’s favourite forward/defender.  Or is he a defender/forward.  Either way, he’s a top guy, who’s had a rough year.

The 25 year-old had started the season off strong, making an appearance in every match until the 3-2 win over Minnesota, which put him out for two months.  In his comeback, he made a few appearances, until another injury put the set-piece goal poacher (he didn’t score any goals, but he tried… he tried so hard) out until the end of the season.  He managed to make 4 substitution appearances in his return to fitness over the playoffs.

Strangely enough, he persevered, and managed to fight his way into a lineup that had many good defenders, and likely would have kept his spot all season long.  If he remains healthy next season, he’ll be one contributing to that very un-Toronto FC situation of having a wealth of positional depth.

Tony: 17 – An injury-plagued campaign for the Slammin’ Salmon that made it difficult to capitalize on the great 2016 post-season.  Still has the chops when healthy and maybe ready to steal a starting role next year if he can stay off the trainer’s table.

Kristin: 14 – Tough year for Hagglund; started off looking not just good, but like he was taking the next step in his career and then the injury.  And then another injury.  Instead of Hagglund having what was looking like a career year, instead had him out for a big chunk of the season and Zavaleta and Mavinga having huge years.  But that return from injury to sub in for Moor during the playoffs?  What a performance – his play from the beginning of the season and those games at the end elevate his rank.  Hope he keeps building on it this year.

MarkHSV: 13 – For me Hagglund might be a bit better than Zavaleta, but injuries and the stellar play of Mavinga kept him out of the lineup. Showed some very good play at the beginning of the season before his injury as well.

TuffyRocks: 15 – Great backup and great in the air.

Mr. Tuktoyaktuk: 12 – Settled into a back up role, may get more time next season depending on Moor’s fitness.

WhaleyStatic: 14 – Maybe too high but just really like him and injuries robbed him. Think he’s a key guy going forward.

Steve G.: 13 – Cant really overstate the importance of the role that Hagglund played early this season when Moor was injured. Hagglund played excellent at the middle of the back 3 and demonstrated that he will be ready to move into that role whenever Drew Moor moves on. Also, not really Hagglund’s fault that Mavinga appeared in the scene and from May until December was the best defender in MLS, thus taking Hagglund’s job. But credit to Nick, despite a few rough breaks and some bad luck with injuries- he was still a key member of the club’s success.

Aron: 20 – Didn’t score a header goal in the final, as I predicted. He was hurt a lot, but didn’t fuck up when he wasn’t.

Jen: 16 – All these back line guys are pretty good so I’ll just lump them in together.

JordyLike: 11 – One of my favourite TFC players, but was too injury prone to justify any higher a spot. Always solid and the future of our defence with potential captain material.

TuffyRocks: 15 – Great backup and great in the air.

Artur: 10 – Good defender and energy off the bench.

Alex: 15 – The injuries impacted his development – once Moor leaves , he fits into the back three nicely.

James: 13 – A season hampered by repeat injury, that Hagglund still has to be considered in the top half of this list is a measure of how much he has grown into his role over the last season-plus. His in-from-the-cold display in New York during the playoffs alone, when TFC were under the cosh and bending, was worth his weight in gold.

TweetKred: 14 – Arg!!!thought it would be the breakout year for the far too energetic youngster but instead started breaking his bits. The hit from Bono to the leg happened right in front of me and I screamed at him to get off the pitch when he wanted to go back on but I guess I’m not loud enough. Will try to fix that in the offseason. When he did get in he was so athletic and solid. If he stays healthy he will be Moor’s heir.

Zicozay: 16 – Nick strikes me as a steady hard working force.