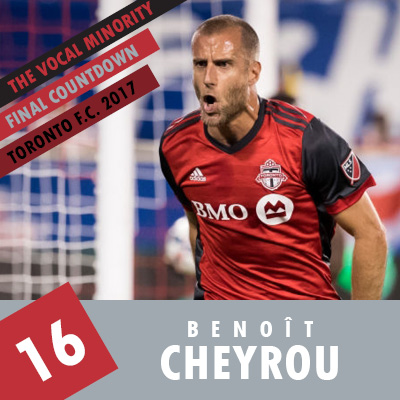 Benoit Cheyrou became iconic. He wasn’t here for very long, but his contributions and class were hard to ignore.  He came on against Montreal in the semi-finals and ‘saved us all’.  And he did.  What a goal.

This season, his role appeared to have three facets : be a mentor, become a coach, be a backup.

He’s been a mentor to Tsubasa Endoh, showing him how to have dinner in public.

He’s been reported to be going after his coaching badges and it was confirmed with his retirement that he’ll join the training and coaching staff.  The pitch’s loss is the future’s gain.

And when Giovinco was hurt and Bradley was called up, Cheyrou stepped in and filled their roles where possible.

His run out at the end of the Cup Final took about 20 seconds to figure out why and how he’s getting a trot out when there were, arguably, far better servants this season to get a token trot out on to the pitch.  I mean, they scored when he was out there, so… take it as you will.

Either way, Marseille mainstay, Toronto’s shrewdest bit of business a few seasons ago my best friend announced his retirement on December 21st, so not to ruin everyone’s Christmas.  #MerciBenoit.

Kristin: 16 – Benny balls has left the building; well not really as he’s going to be a coach but you know what I mean.  I’m so sad to see him retire, but we have been so lucky to have a player of his calibre to watch these past three seasons. Smart,skillful and able to step in at a moment’s notice in Bradley’s absence (hello Voyageurs Cup!) to guide the team.  Will forever be known for that goal, and rightly so.  Au revoir Benoît, merci pour tout!

Duncan: 21 – Ah Benny balls. Did his job by playing a big part of winning the Voyageurs Cup and keeping things going during the gold cup. Loved that he got on the pitch one last time at the end of the season. After the big pay cut, I hope he’s by far the best paid coach at whatever level of academy team he ends up with.

Tony: 16 – Au revoir legendé! At 36 and after a sparsely used season – Benny Balls has hung up his boots to join the league’s wealthiest junior coaching staff.  Not a ton of highlights in 2017 but always so class and so professional when called on.  TFC folk hero status: activated.

Susan: 18 – So glad he’s still with the organisation.

WhaleyStatic: 10 – I know this is too high but legacy/retirement placing in the top ten.

MarkHSV: 17 – Cheyrou deserves to be higher, but he really just played a bit part this year (and last year). I think he’s a class act and its great that he will remain in the organization after retiring.

Jen: 10 – His rating is inflated because I just really fucking like the guy, but he didn’t play enough to be #10 on this list.

JordyLike: 16 – Same quality as always with him, even if he had lost a step or two this season. Always one of TFC’s better players, all the best in his retirement.

Mel: 18 – While we didn’t see him a tonne this year, his presence was always felt when he was on the pitch. While I know it was a tactical decision as well, Vanney subbing him on in the dying minutes of the final- thus allowing him his swan song- was classy as fuck.

Alex: 20 – Veteran who’s influence over team was felt more in Locker room then field, a great add to coaching ranks.

TweetKred: 18 – Benny Balls goes out on top! Was so glad to see him get in for the final minutes of the final. When Michael was away for those few games Benoit stepped in and provided the leadership and stability needed to continue winning. So silky and calm on the ball. I hope he can teach his qualities to at least one player in our academy as he moved into the coaching phase of his career.

Jeff: 17 – So sad to see him retire, but glad he is a part of the club. Never will forget that diving header.

James: 18 – What can you say about a man like Cheyrou? By pedigree he should be way higher up this list. His impact, albeit in limited action, was immense on so many levels: not just anyone could take over the captain’s armband in Bradley’s absence with the side barely missing a beat. Look back over the season and there were so many important moments that Benoit was a factor in. He will be missed next year, but he retires, deservedly, as a champion.

Martyn: 14 – Thank you for the service to our club!

Steve G.: 15 – He is probably 18 or 19 on the list for his on field contribution as he was largely unplayed except for when Bradley was away on international duty, but his contribution at practice and in the dressing room is so impactful it almost puts him in the team’s top 11.

Mr. Tuktoyaktuk: 15 – A veteran with an uncanny ability to be in the right place at the right time, despite limited minutes. Glad he’ll be part of the coaching staff.