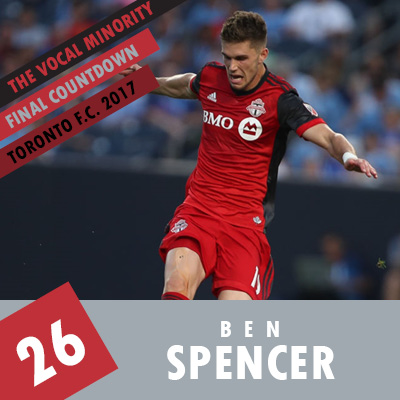 Spencer was signed to Toronto FC back in May after having joined TFC II in the fall of 2016.  The towering forward (6’5!) was signed to a homegrown deal and brought in to bring some size to the attack – but had his option declined (though he will be invited to the preseason camp apparently) at the end of the season.  He had a solid season with TFC II, however he was only ‘meh’ at best with the first team and drew the ire of supporters for getting minutes over Jordan Hamilton.  He did get a couple of assists and the idea of a big target man is a good thing – something TFC is often missing – but Spencer needs more minutes/development before he can truly play that hold up/target role.

Here’s a look at one of his goals for TFC II:

Tony: 22 – It’s the strike force’s tall white dude! The jury is still out on Spencer and if he’s quite at this level but an off-season of strength and added force up front wouldn’t go amiss .

Jen: 26 – I like to call him “the American Jordan Hamilton” around you Voyageurs types.

JordyLike: 26 – Not sure how someone can be so tall and be so poor in the air. Mostly just upset that he was eating up Hamilton’s minutes.

Andrew: 25 – Disappointing, ever time he plays.

Aron: 27 – If this guy wasn’t 9 feet tall he would be working at Burger King

TweetKred: 26 – How the actual fuck did he see so many starts. Rarely do you see a player have absolutely no impact on a game consistently trotted out in the starting 11. He was either a hell of a player on the training pitch or is secretly related to the coach (no offence to Zavs who wears the nepotism well). At 6’6” he packs a lot of disappointment into a large frame.

WhaleyStatic: 24 – No clue why he keeps getting the call over Hamilton all the time. Blackmail? Kidnap relative? We’ve seen Hamilton score, hardly see anything here.

YellingAtSoccer: 26 – Did he do anything?

Alex: 25 – Seemed to be promising prospect however did not have enough skill for a larger squad contribution.

James: 24 – Spencer’s playing time seemed to draw a lot of response, in particular from those who couldn’t see why he was getting the minutes they thought Hamilton deserved. The most likely reason is one of type: Spencer is more of a target forward, whereas Hamilton is not. The best of a young man who has battled through injury and lengthy comeback has not yet been seen.