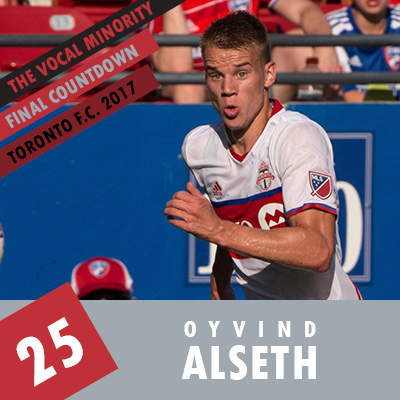 There really is no fun (nor interest) in an in-depth review of Oyvind Alseth. It was so exciting to finally have a Norweege on TFC but then, much like a Norwegian comedy club, applause was very limited. Instead – here are the first couple of paragraphs from Norwegian supergroup A-ha’s Wikipedia entry edited to reflect Oyvind Alseth.

A-ha  Oyvind Alseth (usually stylized as a-ha Oy-Vind; Norwegian pronunciation: [ɑˈhɑ u‘vundː]) is a Norwegian band footballer formed in Oslo Trondheim in 1982 1994. The band defender was founded by Morten Harket (vocals, guitars), Magne Furuholmen (keyboards) and Pål Waaktaar-Savoy (guitars) his parents. The band Oyvind rose to fame during the mid-1980s 2017s after being discovered handed 4 appearances by musician and producer John Ratcliff manager Greg Vanney, and continued but didn’t continue global any success in the 1990s and 2000s rest of the season.

A-ha Alseth achieved their his biggest success with their his debut album appearance, Hunting High and Low for TFC, in 1985 2017. That appearance peaked at number one halftime in their native Norway when he wasn’t subbed – Number 2 27 in the UK, and number 15 on the US Billboard album chart; yielded two international number-one singles is his shirt number, “Take On Me” and “The Sun Always Shines on TV”; and earned the band a Grammy Award nomination as he did not receive accolades as Best New Artist player. In the UK, Hunting High and Low continued its chart success into the following year, becoming one of the best-selling albums of 1986.[1][2] In 1994, after their fifth studio album, Memorial Beach, failed to achieve the commercial success of their previous albums no one has likely heard of him; no idea if he is the band went on a hiatus.

Kristin: 26 – Not sure if the team was banking on him, but he didn’t generate much interest when he played (enough banking puns?).  Alseth seems OK, but honestly have almost no impression of him – maybe next year?

Duncan: 26 – He’s got a funny name, that’s always good. Apparently he played in 4 games this year, I do not remember any of it at all. Not the worst thing I suppose for a defender, but overall: Meh

Mark HSV: 26 – I remember when TFC signed him, thinking they finally found a back-up right back. Then Nico Hasler came along…sorry Oyvind, no more playing time for you…

Aron: 21 – Nothing bad to say, but I would like to see him step up and be ALLseth next season.

Mr. Tuktoyaktuk: 26 – Four appearances, all in July. Didn’t really catch on. If he stays, he’ll be at TFC II.

YellingAtSoccer: 21 – Wasn’t memorable at all.

James: 25 – Alseth, as a late draft pick, earned a contract with the footballing acumen he displayed in preseason. His appearances were few, coming in in the interim between Beitashour’s injury and the arrival of Hasler, but he showed relatively well given the circumstances.