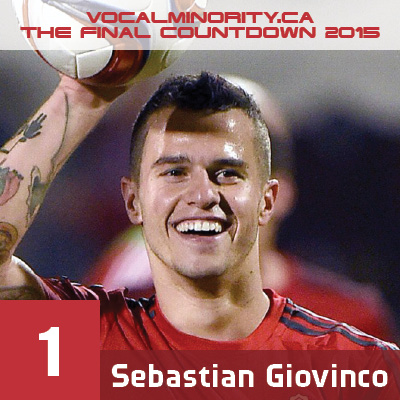 Mark: 1. What can only be described as a big money bust, Sebastian Giovinco made his debut in MLS this season to little fanfare and plenty of “who?”.  After struggling in Juventus for much of his professional career, he did what most past-their-prime players do, chase the money and head for the anonymity of North America.  Sebastian Giovinco struggled with his game all season, scoring a paltry 22 goals and a substandard 16 assists.

Duncan: 1 Yawn, another award. Well deserved obviously, he had a hell of a season individually. Perhaps the biggest impact on a Toronto team from any individual since Vince Carter came along, that one ended well right?  Very enjoyable player to watch. He’s already been eulogised everywhere else so I’ll stick with asking what he does next year? Do we just stick with the same game plan, him as a second striker floating all over the place who doesn’t really do much defending and leaves us with a 4 man midfield that’s easy enough to work your way through or around and thus puts the defence under too much pressure? That would probably bring a lot of goals at both ends of the pitch again.  Instead could he be the one striker with a 5 man midfield? I don’t really see that working out, you need your striker to do a lot of work holding the ball up and all that for the others to play around him, doesn’t seem like his game, and also are they really going to bench Jozy Altidore? As if. Could he be the number 10? Makes it very easy for the opposition to crowd him out and make him less effective, but might be the best use of his skill as far as the shape of the rest of the team goes, even if it does bring his personal numbers down. I’d be inclined to go with left wing, but then that would put pressure on the left back, so the left sided defensive midfielder would have to be very good to make up for his lack of  defending effort.

There are no ideal solutions really, and when you add in the fact he might well be off with Italy at the Euros for a good chunk of games, it’d be unrealistic to expect a similar impact statistically or highlight wise next season.  If that leads to a better team, I’d happily make that trade off. As for this year, it was all a bit of a mess really, but goddamn he was fun to watch at times. Here’s some highlights

Tony: 1. What can be said that hasn’t already? He’s the bloody, tiny, big deal and broke MLS records. Does what it says on the tin.

Kristin: 1. Never have so many good things come in such a small package. Bez can wander around Italy in casual clothes all the time if this is the result.

Mark HSV: 1. Incredible player. Can win games by himself against weaker teams. Had a tougher time against better teams, but Vanney didn’t appear to figure out how to get the most out of him when he was well marked. In previous years, TFC would not have beaten the supposedly weaker teams, but this year Giovinco did it for us. Basically single-handedly got TFC into the playoffs. The rest of the squad needs to catch up to do better next year. Giovinco is miles ahead!

TC St Clair 1. He has his own comic. And he must be radioactive, being the Atomic Ant. Like Might Mouse, but smaller. He’s just that SUPER!

Jason Anderson 1. Screw you guys and your glorious little Italian who can solve most of your problems.

Alex Lach 1. The star of the TFC season, creative, inspiring and wonderful to watch, made you believe that TFC was going places

Mike Newell 1. Do I really need to explain why?

Matt Goshert 2. TFC Finally threw money at something and it worked.

Enrico S 1. Italians do it better.