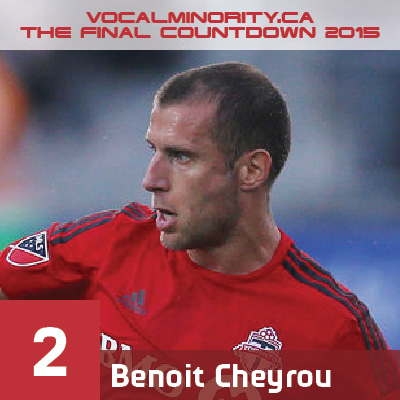 Duncan: 3 Benoit Cheyrou was probably my favourite TFC player last year. Sure Giovinco was the more obviously flashy player, and with the goals and assists to back it up, Michael Bradley more all action and Justin Morrow more reliable, but Cheyrou was such a pleasure to watch. Smart and skillful, and given his age forced to rely on those attributes rather than any speed, athleticism or strength to maintain possession or build attacks. In my head I now want to type something about he’s the thinking man’s midfielder, and I know it makes me sound like someone wanking over Andrea Pirlo, and I hate that, but goddamnit that’s just the effect Benny Balls had on me.

He’s obviously a good passer of the ball, not just in a Jonathan Osorio tidy keep possession kind of way, but often very incisively, whether an accurate long ball into space, or a seemingly impossible ball threaded through multiple defenders, there was regularly a lot to admire. But it’s his ability to get out of tight spots that I most admire. It happened often where one or two players would close him down and a turnover looked imminent, but a quick move, a subtle feint, perhaps a cheeky backheel and he was free, moving into space with the ball, and with the opposition players looking slightly foolish.

Two examples spring to mind. This, from preseason is magical stuff, tormenting 3 players, making 2 of them run into each other before setting up a goal. I love that Steven Caldwell ignores Giovinco who scored the goal to run over to Cheyrou and celebrate with him instead.

Then, one of my favourite individual moments of the season was in the game against Portland, where he first won the ball from, then easily got away from, Fanendo Adi, on the edge of his own box I might add, then made Gaston Fernandez’s legs crumple beneath him (you’d expect a guy named after a cat to have better balance), before hitting a 50 yard pass right to Giovinco’s feet. Lovely stuff.

Moments like that make me a bit sad when I try and think about where he’d play in the team next year, as I’m not sure I can really find an obvious place for him when you consider there has to be a place for Bradley, Altidore and Giovinco. I think there also needs to be a very good defensive midfielder as well. Could that be Cheyrou’s spot? He was basically playing the back end of the diamond midfield for that brief time when the team kind of looked like it made sense and he is a very smart player after all.  I don’t quite see it though, he’s a bit too old to be the putting in the relentless running and harrying that a really good DM should be doing. Also, let’s face it, TFC’s defensive issues also had a lot to do with the midfield in front of them, not specifically Cheyrou’s fault by any means, but he contributed so obviously changes are definitely necessary and sadly we all know Bradley’s not going anywhere.

Add in the fact that he makes a lot of money, and well, I can’t help but think it could be better spent elsewhere, probably on that very good defensive midfielder I was talking about. I’d be very happy to see him stay and Vanney figure out a formation that includes him and that works, but I really don’t see it happening, so in the name of overall team cohesion, I’d accept a regretful au revoir to Benoit Balls.

Tony: 3. A pedigree above most defensive midfielders TFC has employed. Hoping he has a year left in those smoky French lungs.

Mark: 2. Bang for your buck, as far as aging European players go, a great bit of business

Kristin: 2. The best (non Seba) sighing last year – those tasty passes, those little moves out of the back – he may look like a menacing dock worker and while we’ve never seen him smoking Gauloises it’s implied – calm, cool, intelligent player. Hope we can get one more year out of him.

Mark HSV: 2. A consistent presence in midfield, with good vision. It’s hard to judge a central midfielder who doesn’t attack very often and maybe isn’t a big tackler, but he was important in keeping possession and setting up Giovinco. It’s good to have his experience and confidence. Much calmer than Bradley as well. Hope he has another couple of seasons left in him.

Yelling at soccer 3. Did well this season, Actually a decent pickup. Still would have rather had Laba though. *sigh*

TC St Clair 2. Because I like him and his game. He still can make a long accurate pass and he’s French. Calm under pressure, smooth like beurre.

Jordylike 2. Aged like a fine wine, smooth as brie. Hope we can baguette one more season out of him. He’s French.

Zicogold 3. Took a load off of Bradley this year

Jason Anderson 2. One of the most underrated players in MLS, unless you watch the game on TSN (in which case, his underratedness is brought up every time)

Ben Bromley 3. Every team could use a Cheyrou

Alex Lach 3. An all around professional, showed that calm collected attitude in the middle of the park, great passer who at times seemed to struggle with the role of Bradley sidekick, both players played similar roles, not one could figure who was the enforcer in the middle.

Mike Newell 7. Started out really well, and at one point I would have had him higher on the list, but he faded a bit near the end of the season. Again on his day oozed class and could pick out the right ball at the right time. When he was off, he looked his age and was slow, both in speed and decision making on the ball. That said I still think he has a role to play on the team, but not as a starter and not at his estimated salary cap hit. The question will be is he worth the TAM money?

Enrico S 2. Seven assists. Did what was needed. Solid midfielder.

Aaron Bennett: 2. The signing for Cheyrou was one of the highlights of the year. His vision and leadership played a large part in our “successful” season. Second and third spot is interchangeable.