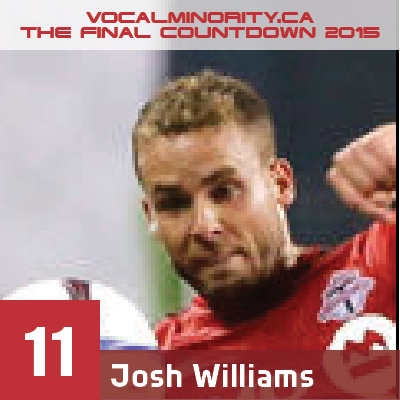 Duncan: 8 Was very underwhelmed when he signed, after all could a NYCFC reject really be any kind of improvement to even TFC’s weak defence? But hey, he was a right back and we certainly needed a right back, so why the hell not, worth a shot right? Then he just got played at centre back, didn’t look terrible at all, and well, not looking terrible was more than good enough to keep his spot.  Turned into a decent player back there, nothing special but nowhere near as calamitous as other cbs we could mention. I don’t think he should be starting as a centre back next year, if he is that’d be a huge signal of a failed off season, but I’m more than happy to have him around as a back up centre back, and to fight with Mark Bloom for the right back spot. Compare his impact to that of Kantari and once again you get the idea that Bezbatchenko’s better at picking up cheapish MLS players than he is at bringing in higher priced ‘stars’ from Europe.

Tony: 8. Was Williams good or would anyone half-decent have looked like Beckenbauer on that awful backline? A decent pickup all the same.

Mark: 18. Not a bad pick up for a castaway, but the defensive problems do not lie at his feet.

Kristin: 15. More solid than the Kantari 6000 and was decent at the back – but like Perquis, not the backline leader that’s needed

Mark HSV: 13. Not always solid, but he was better than their other mid-season defensive reinforcement in Kantari. A surprisingly decent player for a waivers pick-up.

Yelling at soccer 14. Did surprisingly well, maybe expectations were that low

TC St Clair 17. Who? Managed to surprise a few people with some decent play when no one expected he’d be able to keep up.

Jordylike 12. Good depth that we pretended could start.

Zicogold 15. Got hung out from his defensive pairing but was steady although slow and unspectacular

Jason Anderson 15. Probably a better right back than a center back, but as he simply avoided injury he is a starter for TFC.

Richard Wyatt 18. Arguably TFC’s best central defender. An award which is a lot like winning the beauty pageant in the burn ward.

Alex Lach 8. A late arrival to the team, at times whomever was his partner on defense, showed a calm, cool and collected attitude. Would have been a great CB partner to skillful defender however in TFC’s case he just was usually along for the ride with French Foreign Legion

Mike Newell 10. Was solid when he got here, and filled in at CB once Vanney realised Kantari wasn’t the answer. Performed well, but is not the answer as a starter.

Matt Goshert 7. Another Ohio guy. Solid player and I’m making the rankings here so I’ll put him wherever I want thank you very much

Aaron Bennett: 12. Williams surprised me more than any player this year. He played well beside Perquis and definitely contributed to our regular season. Post season is another story…. I would like to see him here next year as a depth player.