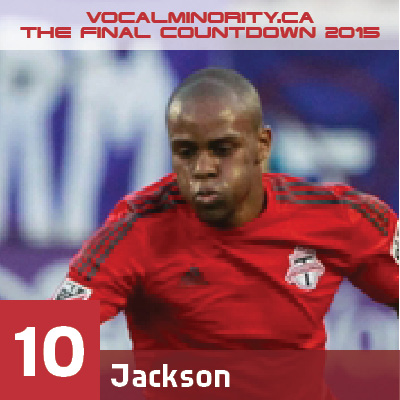 (Edit: Almost all of this was written before the decision to not pick up his option for next year)

Tony: 10. If there exists the everyman in the “Joga Bonito” world of Brazilian football – it must be Jackson. He has the rough tackles of a Dunga, the man marking of a Fat Ronaldo and the white boots of… well the rest of them. But somehow, in this little windswept corner of world football – he fits. Jackson is no MVP – he’s not even all that consistent. However, when used correctly he can be a very useful MLS piece. The kind of guy a good MLS side has on the bench.

Despite a slow start after missing a lot of pre-season (awaiting his newborn child to slide tackle its way out of its mother) Jackson eventually found a place within Greg Vanney’s “formation”. Substitute forays sometimes had a little impact but it was late in the season, when Vanney experimented with Jackson at fullback, where the Brazilian seemed most useful. Of course, as mentioned earlier – Jackson is a guy good MLS sides have on their bench. When push came to shove (no pun intended) Jackson isn’t good enough to handle good sides defensively on a regular basis. He’s useful. Just not over-useful.

Duncan: 9 Started his season with a goal in sexy Sandy after coming on as a right back, tying it up late to secure a valuable point, before getting left completely alone and giving up the header that turned out to be RSL’s winner moments later. Generally played in midfield through most of the season and he personally didn’t look bad, and the team generally did quite well when he played, better than when he didn’t.  Took up the poisoned chalice of the right back position near the end of the season and again didn’t look bad at all.  It was all very competent and there was really very little of the erratic anything can happen action Jackson stuff that necessitated a Jackson klaxon in the first place. But let’s face it, we were all expecting the moment when it would blow up and go wrong, after all fatherhood or nor, he’s still Jackson. Sadly when it did go wrong, it really went wrong. Montreal noticed that he, along with Robbie Findley in front of him, was the weakness to go at, Greg Vanney decided this wasn’t a problem at all and rolled them out there again and Ignacio Piatti picked himself up from his pre game roflmao-ing and repeatedly murdered him.

Then his option didn’t get picked up. Not entirely a harsh decision given his wage, but I really really hope they’re planning to negotiate and bring him back at a more cap friendly price if he makes it through the first round. Ideally he’d be an option to come off the bench rather than be starting, but he’s the sort of useful player any good MLS team has in it’s squad.

Mark: 5. Played very well off the bench.  Doesn’t excel at anything, except maybe as a monkey wrench to the opposition.

Kristin: 11. Almost top 10 klaxon! Scary when Jackson is this highly rated; but that’s the drop off for TFC. Showed some maturity this season and somehow was our second best right back.  Seemed to shed his ‘walking red card’ tag for much of the season, which made him a lot more fun to watch.   Solid bench player, the kind every good MLS team needs – plus, he has his own klaxon!!

Mark HSV: 8. Jackson! He is a fun player to watch, and he does some tricky stuff with the ball. Had an ok spell at RB until the last 2 games where he was hung out to dry with no support. After a kinda crappy 2014, he bounced back this season and has matured as well. I credit the fact that he is now a dad as contributing to his maturity level (speaking as a dad myself). More Jackson in 2016 please!

Yelling at soccer 5. #JACKSONTOP5KLAXON Was pretty solid at the end of the season. Liked watched him try to be Brazillian and fail miserably.

TC St Clair 15. It pains me to rank Jackson this high. He should be higher but I hate him. Aside from speed he has no other useful tools IMO. Might as well sign Usain Bolt. Ok fine, he played a decent RB.

Jordylike 13. Would be good midfield depth if Toronto had literally one healthy right back on their roster.

Zicogold 8. Versatile; Lifts the team’s spirit with his fiery spirit

Ben Bromley 12. Speedy, but from the midfield please, not the back line

Alex Lach 9. Either the most loved or hated TFC player, depends who you ask. Had decent run as back down the stretch, what hurt him was pairing up with Findley created an black whole within TFC’s formation that could never really be fixed.

Mike Newell 14. Again probably not a starter for most teams and was used more than Vanney would have liked. Had some strong performances both at right back, and on the right side of MF, but when it mattered in Montreal in October he was awful and Piatti ate him for lunch.

Matt Goshert 17. He has one name. That’s kinda cool.