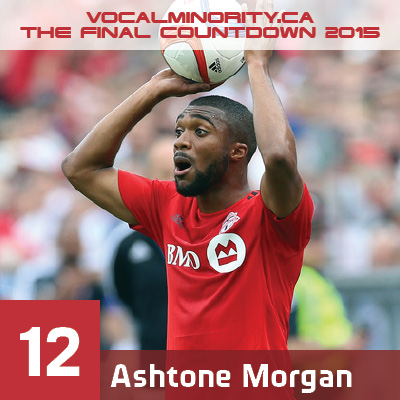 Kristin: 10. *Nasty Left Back actually played! After being nailed to the bench the previous season, TFC’s defensive woes meant Morgan got to play. Saw some decent play – still has a future in the game.*

I have a lot of time for Ashtone Morgan and I want nothing more than for him to do well.   So to watch the roller coaster that has been his career with TFC the past couple of years has been difficult; watching him go from regular playing time to exiled was not fun.  However you take your chances when they’re given to you – This season was a poor one for the defense, but it gave Morgan an opportunity when injuries ravaged the backline and Morrow became the de facto right back.   This left the door open for Ashtone and he quite ably stepped into Morrow’s shoes.  In fact, as much as the difference is notable when Morrow doesn’t play, so it was when Morgan didn’t play. Honestly he and Morrow made up TFC’s best fullback pairing for the season.   It was almost like seeing the Morgan of old – nice runs up the flank, sending in crosses and actually playing more defense; he’s reading the game better – almost like playing helps develop skills!  There was even the one game that he played as a midfielder; which for anyone that knows me knows this is a long held hope of mine – that Morgan can transition from left back to left winger.  There are always questions about the defensive part of his game and if he stays with TFC this could be a good option for him.  We are the team that plays everyone out of positon after all…

Of course there’s a big question mark for him next season given the contract extension that Justin Morrow just signed; will Ashtone get playing time?  It’s worth wondering if he should look elsewhere so that he can continue to develop as a player and hopefully at the same time get more minutes with the national team.  Staying with TFC gives him a chance to push one of the better left backs in the league and continue to learn from him – but it also means limited playing time.  Morgan is still relatively young (24, 25 this winter) but will need to get regular playing time soon if he’s to get to the next level.  Ideally that’s with Toronto but if it means he gets regular minutes and opportunities then I would sadly bid him farewell.

Morgan had a good year, one of his best for Toronto – but THE most notable thing perhaps was his becoming the first Toronto FC player to hit 100 appearances.  This 24 year old kid has more first team appearances than any other.  Honestly I’m very happy it’s a homegrown player and I can think of few other players that deserved this honour more:

Duncan: 12.  Got a good run of games for the first time in a while and looked alright when he was out there. Most importantly, so did the team as a whole, that was the one good consistent run they had and Morgan’s left back play was part of that. For some reason, Gerg Vanney decided he had to go away from that and go back to Morrow on the left and the revolving cast of ‘not a right back’ right backs. One of many decisions I don’t fully understand. Morrow being re-signed is undoubtedly good for the team, but not great for Ashtone. Might well be time for him to move on to somewhere else where he can get more playing time to get his career back on track.

Tony: 11. The eternal roller coaster of development that is Ashtone Morgan saw both highs and lows in 2015. An enigma wrapped in a riddle.

Mark: 16: I still believe in the kid, but did not have the support to remain effective.

Mark HSV: 12. Morgan looked really good during his extended run at left-back, when Morrow was on the right. They should have kept this going. I can’t remember if Morgan got injured or not, but he is a skilled player, with a good attacking eye. Does Vanney just forget what works well? He should have been a starter because Morrow was good on either side of the field, and we could have had 2 decent fullbacks.

Yelling at soccer 7. Felt like he had a good season, even with the limited minutes he got

TC St Clair 7. At #7, might surprise most. But WHEN he was playing, he played very well. Had rejuvenated his career, until he lost out to Morrow.

Jordylike 11. Nice that our all time leader in appearances is finally getting appearances. Still promising. Would start if Right-footed.

Zicogold 7. I thought was a strong wingback this year

Jason Anderson 25. For a player with the number of MLS appearances he’s had at such a young age, he should be a lot better than this.

Ben Bromley 23. A starter for TFC’s defense? No, thank you.

Richard Wyatt 14. One day he’ll come back as well as he goes forward, right? I mean he has to, he’s a defender!

Alex Lach 6. Ashtone found his groove again this year, the TFC home grown player, showed why the team believes in him plus really worked on some of the issues that he had within his game. TFC was once again a wide team and that worked for his skill set

Mike Newell 15. Nice little bounce back season for Ashtone, when he got his chance to start he did well filling in for Morrow, but as is the case it seems every season he picked up a knock and it slowed him down a bit. He has cut out a lot of the silly mistakes he used to make, but sometime they do pop up now and again. the question going into 2016 is Can he really push Justin Morrow for the starting LB spot? Also can he get back into Floro’s good books for WCQ?