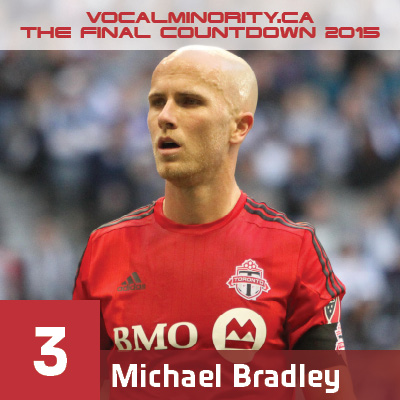 Mark: 6. Let me preface this by saying that I understand defensive midfielders like I understand house music : I can identify it, but I have no concept of when it’s good. Captain Michael Bradley played sort of defensive midfield/general-esque role most of the season.  With five goals in 28 games, there were parts of the early season where he tried to play all the midfield positions, and not excelling at any one.  Eventually he rediscovered his role within the team and the midfield looked, at times, good.

Duncan: 4 Michael Bradley = TFC’s Steven Gerrard. Not the Galaxy Gerrard, I’m talking 2000’s in his prime Gerrard with Liverpool. And I don’t mean it as a compliment.  He was clearly a good player, could do some very good things, occasionally take over a game, but really, think about Liverpool’s time with Gerrard. Over a decade, how many times did they seriously contend for the title? Nowhere near as often as Liverpool fans would think their club should be contending. and Gerrard was a big problem there, in much the same way Bradley’s a problem in Toronto.
Tries to do too much (and succeeds sometimes, sure), doesn’t really have a settled role in the team that makes sense, and then the midfield doesn’t really fit around him. Take it to international games as well, that was the big theme of England in that time, how to fit Gerrard (and Lampard) in the midfield together, now look at the US, sure he’s had good games here and there, but what US fans are happy right now? Is there a coherent plan they seem to have?

The main problem is the cult of leadership they both build up, to the point of being unquestionable, and way too involved in things. As an example why did we have to switch captaincy from Steven Caldwell to Bradley before this season? That was always a curious decision, that really didn’t need to be done, Bradley was obviously the heir in waiting and Caldwell obviously didn’t want to give it up, why disrespect him?   This is very much ‘his team’, there’s no way we could drop or trade Bradley now for the sake of a more coherent midfield/team, we’re stuck with him for a few years and whatever we do is going to have to be built around him. But what’s his best position for us to build around him? Defensive midfielder? Attacking Midfielder? Box to box? Part of a double pivot? He’s been here 2 years now and there’s still no answer to that, and nothing Greg Vanney’s done so far suggest he’s got the right idea, or the will to enforce it.  You can’t even say Bradley’s a good leader, who out there looked in any way inspired in the last few games when the pressure was on?.

Remember last year when TFC’s best stretch of the season was during the World Cup? Same thing happened this year, TFC’s record was better without him and that game against New York when we actually looked impressive against a good team for the first time in months? No bradley. Not as talented a lineup, sure, but it made sense, players knew what they were supposed to do and they did it well.

I’d be happy to see him traded, but that’s not going to happen is it, so I guess we have to hope, whether by new signings or new tactics, TFC somehow come up with a plan that makes sense, that Bradley can fit into in a way that makes sense, and that he’s ok with that and sticks to it and the team as a whole benefits from that. Otherwise I guess we just have to resign ourselves to the mess, and hope he can produce enough good moments at the right time to justify it all.

Tony: 4. No doubting the man’s talent but his bang-for-the-buck is questionable. As is his effect on the tactical make-up of TFC.

Kristin: 4. He is Michael Bradley, he will do what he wants. Not as good as his paycheque, too much influence over the off the pitch dealings with the team. Talented player; needs a defined role.

Mark HSV: 3. Should be higher than 4, but he had so many ups and downs. And TFC kinda lives by how well Bradley plays. I wish he wasn’t always pulled away to USA matches either, but that’s MLS’ fault. I’m concerned that Bradley may not be the right guy to build the team around, unless he can stay focused. His defensive brain-farts were soul-crushing. And he didn’t show up for the playoffs either.

Yelling at soccer 6. Should have been better. Probably the most frustrating person

Jordylike 5. Has to be this high, but shouldn’t. Should be higher, but isn’t. Straightforwardly paradoxical. Like a Christian father, I’m not mad, just disappointed.

Zicogold 2. I believe still drove the centre of the team

Jason Anderson 3. Have you guys tried telling him that Toronto is in a major European country? Might help you AND us.

Ben Bromley 2. There’s an Italian section of Toronto, right? Make him live there, and hire a coach that only speaks to him in Italian.

Richard Wyatt 4. Considering what he gets paid anything less than being the joint-best player is a massive let down.

Alex Lach 10. The new Captain of the team has an average season. It seemed TFC could not figure out where to use Bradley, the center of the park at time seemed crowded and confused like a college party after the kegs ran out. Bradley and Cheyrou had chemistry but it seemed that it at time left both players not playing to full potential.

Mike Newell 3. I have found MB to be one of the most divisive players on the roster, either he’s General Bradley, undisputed Captain…or you loathe him. Very little inbetween. No one can question his work rate, but its that desire to be everything for the team that gets him into a bit of trouble sometimes and clouds his better judgement. Which has led to some high profile mistakes that cost the team valuable points. That said he is still our best MF, Vanney just need to find a consistent position for him to play and stick with it.

Matt Goshert 4. As a TFC player he’s been pretty effective. You may have Britta’d him for our national team. Was this a trap? Was that your plan all along?

Enrico S 5. Should be higher on this list, but this wasn’t his best season.