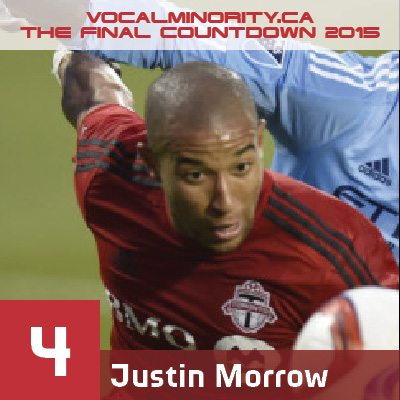 Tony:  2. Since his arrival, you could justifiably argue that Justin Morrow has been the most consistent player on Toronto FC. 2015 proved no different. While much of the TFC defence is fairly tarred and feathered for yet another year of being “The Gateway to Goals Against”, Morrow deservedly avoids the same fate.

When you consider that Morrow was constantly played out of his natural position, constantly moved around to fill Greg Vanney’s needs and with a rotating cast of partners – his stability and second-most minutes logged on the club is all the more impressive. With a contract nearing expired, TFC must move to re-up one of the few defensive stalwarts they have employed over nine long years. Then they can get around to the other three spots back there.

Duncan: 2. The only regular defender to come out of the season with any real credit at all, Morrow was not only the best left back on the squad, but also the best right back, pretty much the only one of the many who did alright and never had a disastrous game of any kind.  He also got to play at centre back now and then, generally with a little less success, but it would be harsh to blame him there, after all he was generally with Damien Perquis, tough to expect anyone to thrive there, though it did at least lead to a comedic sending off, the ref giving Perquis the card first.

Happily, his contract status was wrapped up quickly, and he’ll be back next year. Good to know there’ll still be at least one reliable defender back there. If only he wasn’t in Ashtone Morgan’s position.

Kristin: 3. The best right back we had this year. Still one of the best bits of business TFC has ever done player wise. One of the few that always played hard every game, he excels at Ashtone Morgan’s expense.

Mark HSV: Morrow played well at LB and RB this season, but maybe started to drop off at the end. It’s hard to blame him, he played so many minutes and was the only consistent defender for TFC. Maybe he should be higher on this list, but TFC let in a lot of goals. Still a great player though.

Yelling at soccer 2. Was pretty much the only good thing in defense, even thrown out of position

Jason Anderson 4. I wanted DCU to sign him, so basically I’m just envious

Alex Lach 4. TFC most stable defender, whatever role was put in front of him he took and showed up on game day.

Mike Newell 5. Our best defender and needs to be re-signed in the off season. He plays on the left and can fill in at the right, He’s not spectacular, and you don’t hear his name much which as a defender is a good thing IMO. He sometimes pushes too high, but that is more a Vanney games tactics thing than a Morrow habit. However when he goes out injured the entire back four become unsettled, hence his importance.

Matt Goshert 5. He’s a workhorse. Also he’s from CLEVELAND. Jeez, how many people from Ohio play for your team?

Enrico S 4. Could easily be ranked higher on my list. Solid solid solid.

Aaron Bennett: 6. Justin had another fantastic year. He showed his versatility on both sides of defense. Continuously dependable and even chipped in with a beautiful goal. Give this man a new contract!