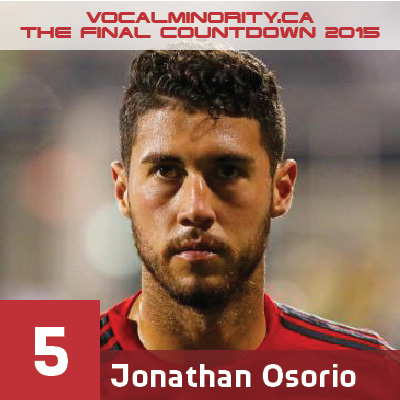 Duncan: 6.It was another good year for Jonathan Osorio, though one where in various ways he didn’t quite seem to easily fit into things. The main way was with Canada where he all of a sudden found himself on the outs with Benito Floro, left out of all the squads towards the end of the year with players like Kyle Bekker ahead of him. Kyle Bekker! At least his TFC teammates supported him, both Jozy Altidore and Herculez Gomez tweeting their amazement at how good Canada’s options are if they could afford to leave him behind for important world cup qualifiers.

Without really knowing Floro’s thought process, they’ve got a point, Osorio’s more than good enough to be a useful player for Canada and he showed it again this year. He was rarely spectacular and once again didn’t get back into the goalscoring groove of 2013, but he was always a very tidy player, good at keeping possession ticking over.  Apparently, in the entire league, of players who created 30 or more open play chances, he was in the top two for passing percentage, along with Darlington Nagbe, which is an impressive stat.

The first chunk of the season it seemed like the team didn’t really know where to put him, but eventually he settled in on the left hand side of the midfield diamond, where he did that whole tidy possession thing but rarely seemed to really get it going in an attacking sense. Towards the end of the season, when he was being used more as a left winger, and thus the reins were presumably off a little, he did start popping up more noticeably at the other end. He got his only goal of the season against New England, I cursed his taking a touch and seemingly wasting the chance before he knocked it home. Very nice. There were 7 assists on top of that throughout the season, all in all a very good one.

Tony: 5. An improvement on a sub-par 2014. Development stymied by Vanney’s ever-changing midfield shape.

Mark: 4. Showed plenty of improvements from the season before, still have room to grow

Kristin: 6. Started the season off slowly and trying too hard to score; but found his feet by the end of the season to show some real improvment by season’s end. Still hates the wing; and Floro still hates him. However possibly

Mark HSV: 3. Osorio has developed into a very talented player, and was one of TFC’s most consistent attacking threats. Not as a goal-scorer, but he was able to find space and create chances for Giovinco. When he didn’t play it was noticeable. Just needs to work on his shot and continue his upward trajectory next year.

Yelling at soccer 4. It was fun watching him play and improve as the season went on.

TC St Clair 4. Canadian. Had a great year despite many criticizing his game and speed. Had some creative genius moments. Oso awesome.

Jordylike 4. Greatly improved. Would excel in a more central role for TFC, would excel playing at all for Canada.

Zicogold 6. Great playmaker, while not being the quickest can play in tight spots with his head up

Jason Anderson 6. How is Floro not using him?! Why do all the countries north of the Rio Grande have to have coaches that do things like this?

Ben Bromley 5. That he doesn’t get callups is boggling.

Alex Lach 2. When him and Gio finally found a groove in the midfield, they made each other better, Osorio showed this season that his creativity and passing ability in the middle was vital to any TFC win.

Mike Newell 4. He might in truth be the most important MF we have, and the one who has made the biggest improvement over last season. Need to add goals to his game though, and better back tracking.

Enrico S 6. He gets better and better.