Toronto FC vs Colorado Rapids: Can TFC Take Advantage of the Sadsack Rapids? 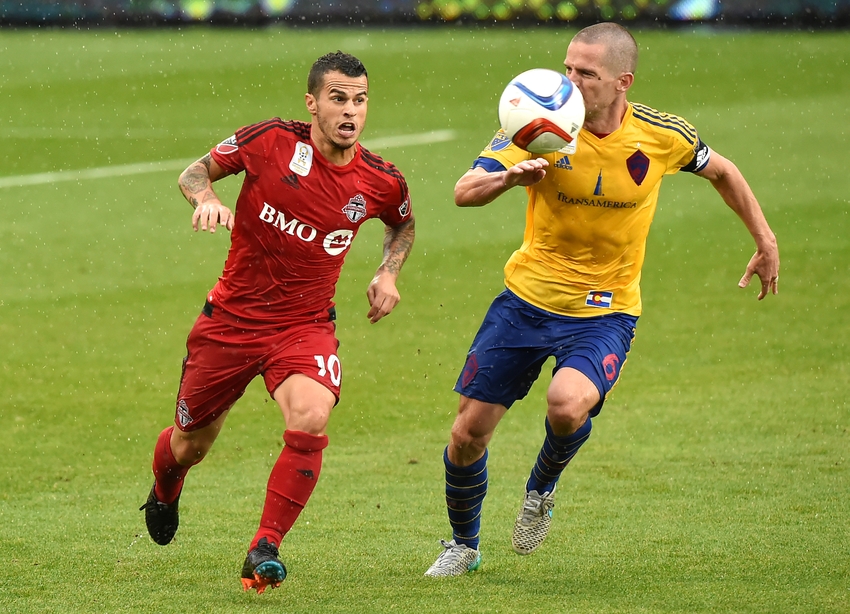 Sep 19, 2015; Toronto, Ontario, CAN; Toronto FC forward Sebastian Giovinco (10) plays for the the ball against Colorado Rapids midfielder Sam Cronin (6) in the second half at BMO Field.Giovinco scored twice in a 3-1 win for Toronto. Mandatory Credit: Dan Hamilton-USA TODAY Sports

It’s game day and Toronto FC are back home to take on the woeful Colorado Rapids.  TFC are coming off a wild one in the Big Apple, in which they grabbed a road point (but looked like they could have won), lost Seba to injury and saw coach Greg Vanney get tossed by the ref.  There was also the – still controversial – offside/no goal call on Jay Chapman, and well like I said, it was a wild one.  However that point was enough to put the Reds just in front of the Chicago Fire in the Eastern Conference (and Supporters Shield) standings.  A win today against the Rapids could add a bit more breathing room for TFC.

Having the Rapids come to town in their current form can’t be anything but good news for Toronto; they’ve lost every road game that they’ve played this year, they’ve only scored two goals in those away games and have only managed nineteen goals so far this season (only DCU have fewer) – what team wouldn’t be licking their chops at such a team visiting their home stadium?  The answer of course is all of them (except maybe LA and their less than sparkly home record), regardless under normal circumstances the Rapids would be a welcome opponent; and under TFC’s somewhat challenged circumstances?  Happy dance.

Toronto FC are still missing a number of players going into tonight’s match – though they’re not nearly in the same dire straights as they were on Wednesday against the pizza rats.  TFC are without Michael Bradley, Jozy Altidore and Justin Morrow (away on international duty), Steven Beitashour (injury), likely Seba (injury) and coach Greg Vanney (suspended).  On the good news side of the books is the return of Tosaint Ricketts and Jonathan Osorio (OK, this is only good news in the MLS sense, Canadian soccer fans are still dealing with Thursday’s loss), from international duty, and the welcome news that Nick Hagglund has recovered from his torn MCL several weeks ahead of schedule.  So coach Robin Fraser (taking the reins from Vanney tonight) has lots of options available this evening.

The Rapids are in better shape player wise with their only significant absence being Tim Howard (international duty), though Zac MacMath is a more than capable keeper so it doesn’t really tip the scales in any one direction – defender Axel Sjoberg is injured and is questionable to play, as is faltering striker Shkëlzen Gashi – but otherwise Pablo Mastroeni has pretty close to his first team available.  The Rapids main issue other than the inability to win on the road, has been their inability to score goals.  Their DP Gashi has struggled mightily this season with injuries and poor form, Kevin Doyle was also dealing with injury issues and their leading scorer Dominique Badji has only just started to round into form – not optimal for a team that on paper should be in a playoff spot.

Scoring will be a question for Robin Fraser’s men tonight with the (likely) absence of Seba, and Jozy still away; after two less than impressive starts by Big Ben Spencer, will we see Jordan Hamilton go it alone up top?  Or will the more likely scenario of a Canadian duo appear with Ricketts partnering with Hamilton come to fruition?   Here’s my best guess of today’s lineup:

If both Ashtone Morgan and Drew Moor start we’ll see Morgan get his 100th MLS game and Moor become one of the few players in MLS to hit 350 games!  Benoit Cheyrou and Victor Vazquez will be key to the game for the Reds (as usual) and Raheem Edwards will continue to provide a spark. I think that Toronto should dominate in this one but that a defensive lapse (overconfidence) will see the Rapids get one goal – sticking with my podcast prediction of 3-1.