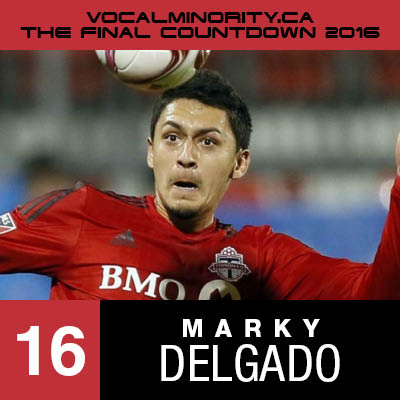 Mark: 13 – Inconsistent.  Some games he looked great, others pedestrian.

Is he going to be a starter?  He is.  No wait, he’s not, but he is.  We’ll say a mix of beneficiary of injuries and a victim of the rotation but by the end of the season, he was often one of the first sacrifices on the substitution carousel, but started often.

Earlier in the season, he came off the bench to score in the first game of the season and looked like he had a very good off-season, contributing to the midfield, a higher tactical aptitude than I remember from last year.  With the depth of talent available to the club in the centre of the pitch, he would make, at the very least, a solid depth player on the bench.  By mid-season he was doing well riding the injury wave, making the bulk of his starts until the end of the season.  However, as the postseason rolled around, he was no longer in the mix, as the midfield solidified with a Bradley/Oso/Cooper with Beitashour/Morrow working the wings and with Johnson/Cheyrou on the bench, he only factored in one post-season substitution.

Kristin: 19 – A noticeable – and disappointing – step back from 2015.  Lots of talent though, hopefully he rebounds this season.

Duncan: 16 – Bit of a disappointing season For Delgado. Wasn’t terrible, but was rarely more than relentlessly mediocre. Needed to be better if the 4-4-2 was going to work and he wasn’t.

Richard B.: Did well in def mid when called upon.

Mark HSV: Unfortunately lost his place when the lineup changed for the playoffs and Cooper became a starter. But was a solid player and will be important for the future. Great to see someone with his talent as depth for TFC and an occasional starter.