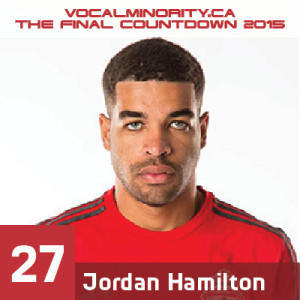 Hello, and welcome to the first article in the Vocal Minority’s 2015 Final Countdown of all the players that played for TFC this year. Over the next couple of weeks or so, we’ll be counting down from 27 to 1, from Hamilton to Giovinco (why even bother to pretend, the real suspense is for who’s the best non Seba player.) Many thanks to those that submitted rankings, and especially to those that also provided comments, including a few people bringing a non TFC fan perspective to things. Anyway, kicking things off at number 27, it’s Jordan Hamilton.

Tony: 26. Before Jozy showed up; before any of us even guessed that Seba would score for fun; many TFC fans thought that this may be local lad Jordan Hamilton’s breakout season. Probably more to do with TFC PR more than any real feel for his development but there was a sense that Hamilton was primed as the next big homegrown deal. Fresh off a much ballyhooed (but really not all that much of a thing) loan spell in the Portuguese second division, Reds supporters can be forgiven for expecting a new star to shine.

Then TFC went and spent their buttloads on offensive firepower and the die was cast. That being said, it was still hoped that Hamilton could get some minutes in a backup role. When Bright Dike went to TFC Texas (San Antonio Scorpions) it was hoped that Hamilton may move up the depth chart but it simply never happened. Instead, Hamilton got a baker’s dozen minutes with the big club and spent the majority of the year at TFC II where his 3 goal in 20 USL appearances didn’t really up his chances. As a local boy he will be all too familiar with the TFC mantra of “there’s always next year”. For him, it’s personal

Duncan: 27. A bit of a let down of a season really. He was never going to get a massive amount of minutes with the big club, but he barely got any, and when he did I don’t remember him doing anything. Ah well, he must have lit it up with TFC II right? Apparently not. Wasn’t noticeably good with Canada either. All in all a bust of a season given the ballyhoo that’s accompanied his rise through the academy ranks to first team. Hopefully he gets better from here.

Kristin: 27. Who? Once the shining star, now the answer to Jeopardy question ‘the next great hope for Canadian soccer’

Mark_HSV 27. Only 13 minutes played. Can’t blame him for not contributing. Hopefully next year.

Yelling at soccer 27. On the field for less minutes than his age.

TC St Clair 23. Hard to do anything useful in 13 minutes of playing time. Struggled heavily with TFC II. So much upside. Wish TFC gave him more of a shot. He’s why we need a C-League.

Jordylike 26. Saw him at the airport last year when he was on his way to Portugal. Last time I remember seeing him.

Jason Anderson 23. Haven’t seen him much, but there are defenders still out there for me to disrespect.

Alex Lach 27. 7. Spent most of the season on the farm in TFC’s case that’s in the wild frontiers of Vaughan, was bumped by veterans down the pecking order, the hope is that TFC lets him develop still, its TFC so hes probably going to be traded.

Mike Newell 25. As this is based on senior team performances Hamilton gets an incomplete grade as he only made 2 appearances for 13 minutes. Will probably needs to spend another season at TFC II.