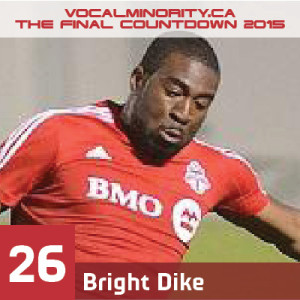 Duncan: 26. Ah Bright Dike. I was relatively happy that TFC brought him back, that he didn’t get taken in the expansion draft. Could be a good depth option behind Altidore, or maybe even he could play in the middle of a 4-3-3, bringing his own brand of carnage to occupy the centre backs with Altidore and Giovinco playing off him? Imagine the possibilities if he could stay healthy and get some games in. After all, he was in line to make Nigeria’s 2014 World Cup team don’t you know!

Of course getting some games in didn’t happen. He did get into the 3rd game of the season in Real Salt Lake when Altidore was off playing for the US, coming in late in the game with TFC down one. What do you know, he got an assist, holding the ball up kind of clumsily before giving Jackson a return pass that put him through on goal and he scored.

He got another sub appearance in the next game against Chicago, bringing his season total to 20 minutes, and that was it. In April he went to San Antonio on loan, and then in August he was waived, because hey, if you’ve got Robbie Findley and Luke Moore, who could need further options? His lack of success with San Antonio and the fact that he hasn’t been picked up by another team yet suggest maybe it was the right decision. Just another of those theoretically very interesting players who just never got the chance to show what he could properly do. Best of luck to him wherever he ends up next, but I’m guessing that’s not going to be with Nigeria any time soon.

Tony: 27. It feels like we’ve been rating Bright Dike for years. It also feels like we use “N/A” everytime. So long Bright. For realz this time.

Kristin: 26. I feel bad for him but the only Carnage he did was to his health insurance.

Mark_HSV 26. 20 minutes played, but he got an assist! I prefer him to Luke Moore and Robbie Findley, but he was never part of TFC’s plans.

Yelling at soccer 26. He played?

Jordylike 24. Always injured, always intriguing, then dropped entirely. Part of the next to nothing we got in exchange for Urruti.

TC St Clair 20. Only played 20 minutes, and got an assist. Sorry to see him go, but there was no more room up top.

Jason Anderson 24. Another player who would be higher if he were healthy/ever played. Is this just a trendy thing you folks are doing?

Ben Bromley 25. A player whose potential is intriguing (some of us wanted DC to take a flyer), but its just not working out.

Richard Wyatt 17. Contributed more by being released than most of the central defenders

Alex Lach 26. Loaned out then released, could have been useful for a TFC that at times lacked that power forward to control the ball when needed