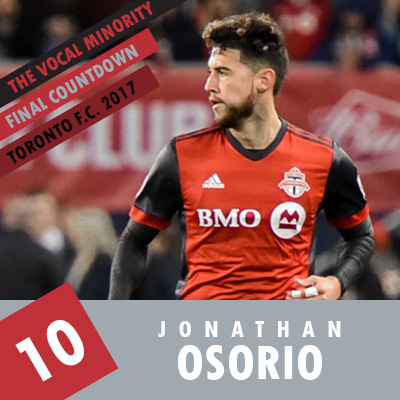 Duncan: 13 – 2016 was an alright year for Osorio, without being the big leap forward we might have hoped for, could that happen in 2017? Not really no.  He started the season in the first team, but was in and out as Vanney tried to figure out how to come up with a team that worked well with Vazquez.  Good news: He did. Bad news for Osorio: It was when Marky Delgado was tried in midfield. Osorio may well be a better player than Delgado, but Delgado’s style complemented Bradley and Vazquez very very nicely, and so Osorio’s place became the bench for a long time. Despite doing the odd good thing from there, for example this delightful goal against Columbus –

– or this even more delightful one against San Jose –

In the last month or so of the season though, as TFC lost and never quite regained their juggernaut form, and Vanney more and more had to switch things up with a 4-4-2, Osorio got more time, longer sub appearances, or more often, actual starts and 90 minutes. All of a sudden he started looking quite good again, passing the ball off neatly and just as importantly quickly and also doing his bit defensively. That kept going throughout the playoffs and he got the start and had a very good game in the final.

Not a great season, but by the end of it, he was looking close to his best, if not the best he’s ever looked, so does that qualify as a good year? Dunno really. I’d like to think we’ll see more of him next year and we’ll finally get the season full of good play that we’ve been hoping for since 2013, but it’s probably not going to happen is it. This alternately frustrating and exciting type of season is probably Osorio for the rest of his career isn’t it?  Ah well, could be worse.

Mark: 12 – Osorio had a very good season. Had some games where he looked lost, but looked effective from the bench in a position where there’s a wealth of midfield talent.

Kristin: 10 – Another tough year for Oso in terms of uneven performances, and inconsistent starting time because of that (and the play of Delgado); but in the latter part of the season it all started to click and we saw probably the best play of Osorio’s career – way to save the best for last.  With the midfield still a crowded place for the upcoming season a lot will depend on Vanney’s tactics and Delgado’s play – but if we continue to see what we saw in the last part of the season he should be a regular fixture.

Tony: 12 – Well…. he literally saved the best til last.  An up and down season at times where the local boy flirted with a starting role peaked at just the right time – a great MLS Cup performance – and a saving grace to an inconsistent regular season.  More matches like that and questions over his place disappear.

Martyn: 8 – Love that he didn’t get discouraged. His persistence made us better, and made him better. I hope he has a long career ahead of him, and I hope he spends some more of it with us.

Mr. Tuktoyaktuk: 13 – Had some big games this season but always the nagging feeling he should do better.

YellingAtSoccer: 9 – had some middling performances but some great ones. Ball kids are probably still trying to get back the balls shot over the Gardiner.

Aron: 11 – Bad hair, tries to be too fancy. Hopefully he grows up like the other guy like that, you know that Portuguese underwear model.

Jen: 12 – Oso is the perfect example, to me, of why we can say TFC is a Canadian team. I don’t care that he makes some mistakes on the pitch, he’s one of us.

James: 12 – Osorio himself has called this past season the most difficult of his career. In and out of the lineup, battling for one of the more congested positions on the field, that he persevered, rose to the occasion, and had his name on the team sheet when it mattered most is a sign of how much he has developed alongside the team that has changed so much since he first took to the field.

Alex: 11 – Proved that he is continuing to evolve as a player, showed his worth in playoffs .

JordyLike: 10 – Always straddling the line in my mind between a player who should be a certain starter and a player I audibly scream at my screen at when he subs on. Massive in the final and showed he earned his spot down the stretch. Hoping for a more consistent season next year.

TweetKred: 13 – I’ve seen a lot of things this year and OSO coming on strong was welcome indeed. He’s seemed tense and nervous in the past but when we needed him he showed up this year. Late game solid play and a few goals tossed in ranks him up there.

TuffyRocks: 6 – He gets 6th over Delgado because he went from great to shit and back to being great again.

Jeff: 13 – His skill on the ball is insane and has a solid work rate – so glad to see him be a big part in the play-offs.  Generally I think Marky does a better job, but Oso is a solid piece of the puzzle.

MarkHSV: 10 – Osorio is a tricky one for me this year. He didn’t seem to really find his place throughout the regular season, even though from a skill level I think he has gotten better every year. But his performance in the MLS cup final was amazing. Hope Vanney finds a way to get him more starts next year.

ZicoZay: 8 – Oso is not quick and needs to up his scoring touch but is preeminent in a crowd with his back to the attacking goal.